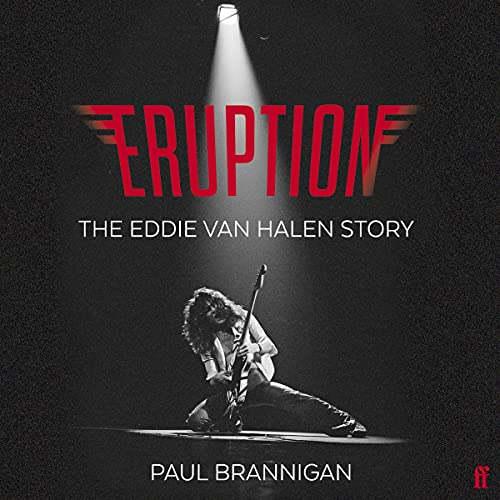 By: Paul Brannigan
Narrated by: Jay Aaseng
Try for £0.00

Arriving in California as a young boy in the early 1960s, Edward Van Halen and his brother, Alex, were ripe for the coming musical revolution. The sons of a saxophone-playing Dutch father, the brothers discovered the Beatles, Cream and others.

From the moment their hugely influential 1978 debut landed, Van Halen set a high bar for the rock 'n' roll lifestyle, creating an entirely new style of post-'60s' hard rock and becoming the quintessential Californian band of the 1980s. But there was also an undercurrent of tragedy to their story, as Eddie's struggles played out in public, from his difficult relationship with the band's original singer, Dave Lee Roth, to substance abuse, divorce and his long-running battle with cancer.

With unique insights, Paul Brannigan's Eruption reaches beyond the headlines to explore the cultural and social contexts that shaped this iconic guitarist, while also turning up the dial on a life lived at volume 11.

What listeners say about Eruption

Narrators English accents are a bit questionable. Story is OK, didn't learn anything new though l.

A Great Introduction To A Legend

I'll start by saying this is a really good, well documented introduction into the life of EVH, and kudos should go to Paul Brannigan because I know that Eds story is quite a ride. There are some reads out there which are more detailed in particular areas, such as the early VH days, or about his history with musical equipment (which was barely even mentioned - I don't even recall anything about his own successful brand of instruments, EVH Gear), but in essence I think this book does justice to his life, with the extreme ups and downs.
My one major gripe is the narrator, whose impersonations are off-putting and downright terrible.
I would recommend this book. However, if you're familiar with EVH and areas of his career I'd probably recommend some of the more in-depth offerings on here.

Great book, let down by the narration

A great book, one I've been meaning to pick up for a while now,. I got a free trial of Audible so obviously this was the first thing I searched for.

The story is great, going into the finest detail of Eddie's early years, the rise of Van Halen, and the downfall of a mighty band and his personal life.

The only downside to this audio version is the narration itself. The different voices got too much for me. Just read the spoken parts, the same way you do the third person parts. In particular, Wolf's statement about Eddie's death should not have been read out in an interpretation of Wolf's voice. I found that somewhat disrespectful.