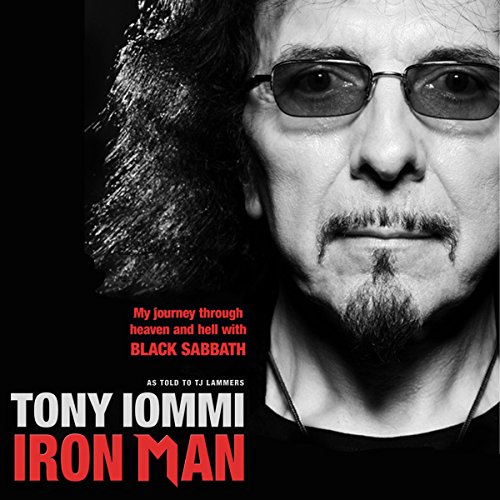 Iron Man: My Journey through Heaven and Hell with Black Sabbath

Iron Man chronicles the story of both pioneering guitarist Tony Iommi and legendary band Black Sabbath, dubbed "The Beatles of heavy metal" by Rolling Stone. Iron Man reveals the man behind the icon yet still captures Iommi's humor, intelligence, and warmth. He speaks honestly and unflinchingly about his rough-and-tumble childhood, the accident that almost ended his career, his failed marriages, personal tragedies, battles with addiction, bandmates, famous friends, newfound daughter, and the ups and downs of his life as an artist.

Everything associated with hard rock happened to Black Sabbath first: the drugs, the debauchery, the drinking, the dungeons, the pressure, the pain, the conquests, the company men, the contracts, the combustible drummer, the critics, the comebacks, the singers, the Stonehenge set, the music, the money, the madness, the metal.

What listeners say about Iron Man: My Journey through Heaven and Hell with Black Sabbath

As a big fan of Sabbath and Iommi, great guitarist and song writer, i looked forward to this audio book immensely. Sadly it became a bit same old same old after a while. . record af album, tour, drugs, punch ups the aroung and around. . got bored

Was a good book, shame I could hear bev’s saliva swishing around his mouth and swallowing and I’m sure I heard his stomach rumble half way through, I throughly I was listening to in the oust house with Alan partridge,
I would recommend but you got to get used to bev

Excellent insight in to the life of Tony and Black Sabbath. Highly recommended and entertaining read (lots of great old Sabbath stories)

I feel like i know toni as the guy is genuinely down to earth, working class and an all round nice guy from all accounts i thought this from little interviews over the years and this book cemented that image .. his story starts from his childhood , learning guitar, the finger accident into black sabbath and the many reincarnations of the band to solo projects, collaborations and the pain of management swindlings and the heartfelt stress of the break ups and wanting to be more expressive as a musician when being held back by producers, band members, drugs and contract obligations he delves into is personal life, drug and alcohol issues and marriages with an open heart and onward through to around 2013 as the telling of his illness is towards the end of the book .. i do hope there will be an updated version in the future..

Not great at writing reviews, so it'll be short. Tony has told his story in a gripping fashion, that the everyday person can understand and feel connected to. If you're considering reading/ listening to this, all I can say is just do it. Bev Bevan narrates it fantastically, and his accent impressions are great. This is very sad in parts, but also very funny too. Thank you Mr iommi, I loved every minute. Fantastic

loved it, fantastic read. very entertaining, narrator a brummie which is a must for this scenario, well done!

Honest story of the rise to Stardom.

I know you could criticize this in terms of a narration of History but this is a honest felt story from a key Primary Source. I am from Birmingham and from Kingstanding and understand almost everything Iommi says. I grew up in the 70s in my teens and not only enjoyed Sabbath but it made me and my friends listen to music, invent our own fuzz boxes and dream of stardom. This book shows me that instead of four super heroes, these were four guys from exactly where we were from and it made me smile, laugh and sometimes cry. What a great story.

Let’s get the bad out of the way…How sensitive if the narrators microphone! Sounds like he has a microphone stuck down his throat, can hear every gulp, smack of the lips and gurgling throughout. Yes the stories are told very well but this was annoying and you can even hear the narrator turning the pages of the words to say at times so these few things were quite annoying.

The Good - Tony knows how to tell a good story, I like the chapters are not too long as it makes the book easily to follow when you come back to it or take a break.

Tony never knew how to give up and in-spite of so many member changes to Sabbath he still plugged away and kept on going when most would have given up!

Going through his health problems later on in life and still carry on with his love of music is really a heart warming story at the end of it all.

Will be so sad when this metal legend passed away but this many 100% has earned every bit of admiration, love, support and appreciation he gets!

Great listen for any Black Sabbath or Iommi fan.

Wonderful history of Black Sabbath and his own personal life. Well worth a lasten for anyone mildly interested in either of those things.

Enjoyable book filled with good stories about his life, the narration really was poor though. I nearly turned it off after the first hour until someone suggested listening to it at 1.3 speed. That really helped.

The story: interesting; The narration-terrible.

I am a HUGE Black Sabbath fan, and this book did deliver some excellent behind the scenes stuff for me, however I found it a tad guarded, compared to some other rock bios. I also think Tony's sense of humour was lacking, perhaps it was just the way the story was written (or the ghost writer's work), so it was a bit dry. Although I've read other Black Sabbath books, this gave me a different take on the rise of the band, also the band members diverse personalities and contributions etc. So I enjoyed that a great deal. The narration was terrible though, I didn't appreciate hearing the narrator swallow and shuffle in his seat constantly. Perhaps it needs to be performed again with a better narrator to make it more enjoyable to listen to?

Iron Man is a straightforward account of Tony's life chronologically without a specific structure or point.
I'm a super-fan, so I liked it a lot; but there wouldn't be enough here for someone who wasn't.
There are occasional stories that are either very funny or fascinating.
Bev Bevans's performance is spot on. Casual & engaging. It's like sitting down for an evening with Tony on his couch.

This book will melt your ears off!

What did you love best about Iron Man: My Journey through Heaven and Hell with Black Sabbath?

Learning the history of the band, the era, and of Tony.

What was one of the most memorable moments of Iron Man: My Journey through Heaven and Hell with Black Sabbath?

There is a story in here of the bands early days where Tony drops Ozzy off at a house that looks like his own house, but is not. It is hysterical.
There is a lot of back stories to the albums and songs. Brings a whole new perspective to the Black Sabbath catalog making me appreciate them even more.

He is a personal friend of Tony and even sounds a little like him. His British accent is very pleasant to listen too.

It made me lolz many times and cringe once or twice.

I've read a lot of rock bio's. This one is by far my favorite. I actually still like Tony after reading it. Same cannot be said about other rock performers books I have read.
Tony is a likable guy and of course, he is the driving force behind one of the most iconic heavy metal bands ever.

As a guitarist and fan of rock I was hoping for a little more detail and grit. I don't care about the reasons Tony got divorced or every drug fueled party but either he has had a quiet life of he denied us the details. It's a hard task to compete with Clapton or Keef's recent books but there must have been more....

Tony is what we all thought him to be, a very decent humble guy.

Narration is a bit home made....which it kinda was.

Im a huge fan of Mr Iommi. great book. from his youth to triumph over a tragedy. gives inside look into the up and down life of rock n roll. and great book for why not to do drugs for the youth. I have every album ever made by him. See how three other worldly beings brought you the king of heavy metal!

Good story, but a bit untight

It was enjoyable to hear about Black Sabbath from the inside, and Iommi is playing it out like the polite and dry witted englishman he probably is. But I feel that both the actual book and the reading could have been tighter. Too often it's more like hearing Iommi doing a documentary interview than reading (listening to) an actual book. The reading is mostly good, and the dialect perfect, but sometimes he feels a bit uninspired, and sometimes there's a bit too much paper shuffling and quirky edits. But for a fan it's a must read!

I absolutely loved the book well-written funny in parts I'm sad that it was over.

The father of heavy metal!

Where does Iron Man: My Journey through Heaven and Hell with Black Sabbath rank among all the audiobooks you’ve listened to so far?

One of the best.

It's a great insight into the history of Black Sabbath and metal in general, told by a rock legend in his own words.

It was hard to listen at times. All that swallowing and mouth noises made it sound very busy and distracting. A plus was his native Birmingham accent which made it sound as if it was Tony himself telling the story.

You can tell that Tony is not a professional book writer because the narrative is simple and repetitive, but that's part of the charm, because it feels like one is having a conversation with him.

A great book from a great artist!

What made the experience of listening to Iron Man: My Journey through Heaven and Hell with Black Sabbath the most enjoyable?

A well written personal story of one of the greates bands of all times.

Very honest and personal style of writing. Feels like you talk to an old friend. Exiting, entertaining and easy to listen to.

Great also for so-so fans or music fans in general.

A great story of a great life.

Toni shows throughout the book how been the working class drive behind the creation of an entirely new genre of music.