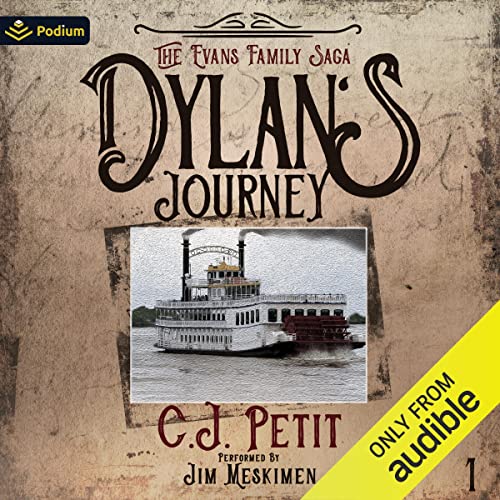 Dylan knew that the boiler was about to blow apart, and if he didn’t act fast, he and the others in the pump room at the number three mine would all die.

In his haste to escape a scalding death, the engine operator panicked and fell. Dylan lifted his heavy shovel as high as his 12-year-old arms could manage and swung at the thundering machine. It could've killed him, but he had to try. As the shovel’s steel head slammed into the machine, it set in motion a series of events that would shape his entire life.

What listeners say about Dylan's Journey

So enjoyed this book have learn so much about American history. It was well read this story goes on so I am off to listen to book 2.

Dylan's journey is an amazing book. This book starts out when Dylan is very young but moves on up real quick. This is one of my favorite books I've ever listened to. Dylan has a way of taking care of problems and people that gets you connected to the story. He works on a ship for a while and there is some Indian fights along the way. He meets guenn and the story really gets interesting. He saves her and falls in love with her. This is the first book in the series and I know now that I'll listen to every book in this series. I don't want to spoil it for you so I'll just say it is worth buying or a credit. Jim Meskimen does an excellent job narrating this book. If my review is any help will you please click on the helpful link below. Thank you.

Not my usual style… good choice.

Although somewhat predictable, the audio, storyline, and characters painted visual imagery that was pleasant and easy to follow. Looking forward to hearing the second book.

I enjoyed the narrator’s voice and the story line. Good book with believable life stories of the beginning of our nation.

This story takes place during the mid 1800’s in the American west. I found the author’s understanding of women, their reactions, and the societal constraints upon their behaviors greatly lacking. An innocent, sixteen-year-old girl who is repeatedly brutalized and raped does not simply get over it and move into another man’s bed within a couple of weeks. The attitudes and behaviors of women in this story were so far from realistic that they were insulting.

The story had great potential. The failure if the author to demonstrate an understanding of the 19th century societal attitudes and the effects of trauma made the story unbelievable.

Further, the narrators did not sound the proper ages of the young (mid to late teen) characters. This was especially true of the female voice.

Overall, the story and performance were greatly lacking. I suggest you look elsewhere for quality listening.

Never thought I'd like this book as much as I did

I tried this title because it was free , my heritage is Welsh, and I enjoy history. Not really excited by the book. Still working my way through, though, so maybe it will get better. Dylan just seems to lead a charmed life, so far.

Also the unnecessary historical anachronisms are painful. Petit's knowledge of historical firearms is truly amazing, but an 1850s reference to "ironclads" which weren't invented until the civil war, and past 9pm sunsets in Nebraska which only happen because of time zones (not until the 1880s) and daylight savings time (not adopted in Nebraska until 1970) just grate. Silly little things, but annoying as they aren't necessary for the story.

Wish it were true

Loved the characters! Kudos to the reader! Enjoyable read, Difficult to put it down. Had to fast forward in the beginning…a little too suspenseful. I’m over it.

Enjoyable story, I like a good book that's hard to put down. What happens next? and now I'll be starting over to make sure I didn't skip anything 🙃 🙂

Great book! I started it once and listened for about 10 minutes and then stopped. Decided to start it again a few months later. Glad I did!! Really looking forward to the next one and curious where the story goes from here.

A wonderful book if the rest of the series is just as good, I will have much enjoyment