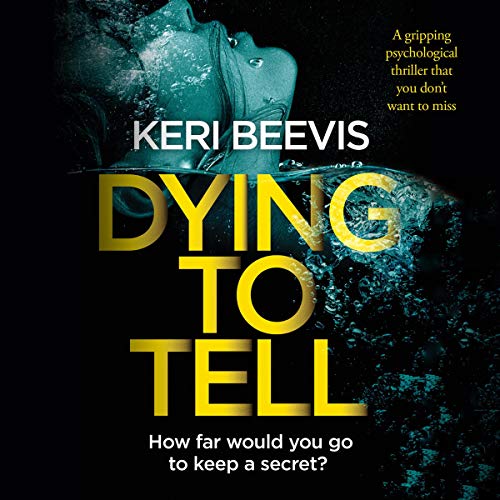 By: Keri Beevis
Narrated by: Eilidh Beaton
Try for £0.00

As the only survivor of a horrific car crash, Lila Amberson believes she is on the road to recovery after she is released from the hospital. Her memories of the accident are blurred, though, and a series of unsettling incidents leave her fearing for her safety. Does she have survivor's guilt or is something more sinister at play?

Jack Foley is reeling from the shock of losing his sister in the crash, so when he first meets Lila, he lashes out, blaming her for Stephanie's death. But when Lila gives him a locket that she believes belonged to his sister, it presents more questions than answers.

As Lila and Jack work together to find out what really happened on the night of the accident, they are unaware that someone is watching them closely - someone who has much to lose if the truth comes out, someone who is prepared to do everything necessary to ensure all loose ends are taken care of.

What listeners say about Dying to Tell

Before I posted this, I checked the ratings on Amazon and this book seems to have received many good reviews. So I can only think the difference is the narrator in this case (although I thought her voice really suited the main character). I really really struggled though the book determined to finish; but honestly at least 5 hours could have been removed, I lost count of how many times the word "knew" was used and how each character just "knew" so much. It really was a 'Mills & Boon type' book and somehow the main character becomes Nancy Drew (but with a serious inferiority complex!)...it will be returned.

I was determined this wasn't going to beat me even although I wanted to give it up numerous times. Thought I might get a nice surprise at the end.....I didn't!
My advice ....dont bother

Another great book from Keri Beevis

Well what can I say ...it's just another fantastic book by Keri Beevis. Again I couldn't stop listening and it was another late night. It had some great twists in it. And like deep dark secrets a little love story in it too. What more do we want. Some crime with a love story,some great twist. All the ingredients for another great book. 5 deserving *****

Dying for it to be over

This book started out well enough, but when I say that it went down the drain, I mean it went alllll the way down. By the end I felt like I was listening to a story for 5 year olds. This book should have been at least only half as long as it was. The way things were recapped repeatedly (even when the event JUST happened) and all of the dreadfully painful details, spelled out like those listening have an IQ of 12. Skip this book. Don't be fooled by the early chapters.

I thought the character development was good. Story line was a bit bland and I just didn't feel the fear or suspense in much of the story. This book barely held my interest and the ending was ok but not a big surprise. Narration was easy to follow.

This author keeps creating books that keep you in its grasp from the beginning. In this book, Lila is the lone survivor of a car crash that occurred on her home from on a date from he!! Lila doesn’t remember the accident but is suffering from survivor’s guilt. She attends the funeral of the girl from the accident, to turn over a locket that she assumes was hers. That was not the greatest decision...the girl’s oldest brother is furious and asks her to leave. However, feeling remorseful for his treatment of Lila, Jack apologies and the duo begin to delve into the reason that his sister had been on that drive. When Lila is stalked and attacked, it becomes apparent that they might be on to something. Great romantic suspense. Love that you can never guess the identity of the killer until it’s revealed!

Absolutely loved the story and performance!!! Could not wait to listen more and more. Thrilling story line that makes you not want to put down/turn off. Narration made the story so lovely, even with the handful of curse words in English accent lol. I hope this pair of author/narrator have more performances together. I would definitely purchase!

I recently listened to The Sleepover, which while it was very dark and disturbing, was well written and fit the thriller category. However, I am upset to have used a credit on this book. I hate to leave negative feedback, but cannot believe this book was written by a woman author. The main characters seem to be from the 1950’s, ridiculous and unlikeable.