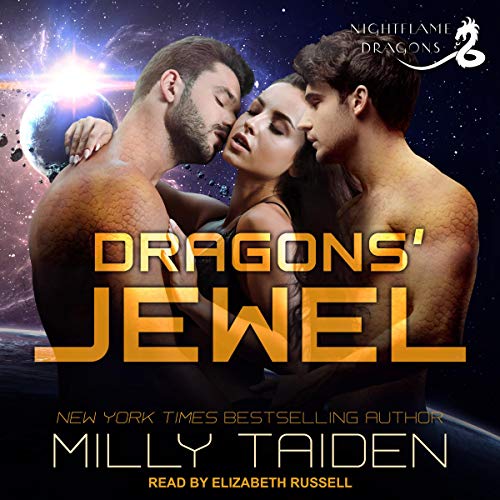 By: Milly Taiden
Narrated by: Elizabeth Russell
Try for £0.00

Gianna Harris doesn't think twice when joining a program seeking surrogates for an alien shifter planet whose female population was decimated during war. It's better than grieving a mother who doesn't remember her. With tears, Gianna says her good-byes and then travels to planet Daeria, where she meets not one, but two sexy dragons who claim she's their mate.

As the dragon king and leader of the shifter council, Voss has a duty to rebuild the planet after a shifter war destroyed everything. The surrogate program was supposed to be simple. The female volunteers are assigned to the shifter species they want and are not forced to do anything they don't want.

When Voss caught the scent of one of the first females to arrive at the spaceport, he and his best friend, Azar, break a few rules to claim their true mate. They steal her away from the wolves she was assigned to. And a particular wolf wants her badly enough to start another war if she isn't turned over.

What listeners say about Dragons' Jewel

Nothing but fake reviews I didn't like it not one bit.they're letting their pathetic lady run around and fight well putting herself in danger including them! typical white lady entitlement behavior. and they're allowing these shenanigans to go on all well being royalty. they could have paid their guards or their security team to do half that crap. and it was boring. And Lame! jumping from one portion of the story to the other but dragging on unnecessary sections of the story. Don't waste your time.

Not the usual great work of Milly Taiden

I usually love Milly Taiden books and can't wait for the next one to come out, and I really wanted to like this book, but just couldn't. I have to agree with many of the other reviews, this one falls short of the mark. It is very bland. with little world building. In one part they say that english is the language of the distant planet. which I just thought was unreal and showed a lack in story building, just a short cut to move the story along. This could have been a great story, but I doubt I will even get the second book or any of the Wintervale series. Milly go back to the Paranormal Dating Agency format, it is a much better format. Looking forward to a better series soon...