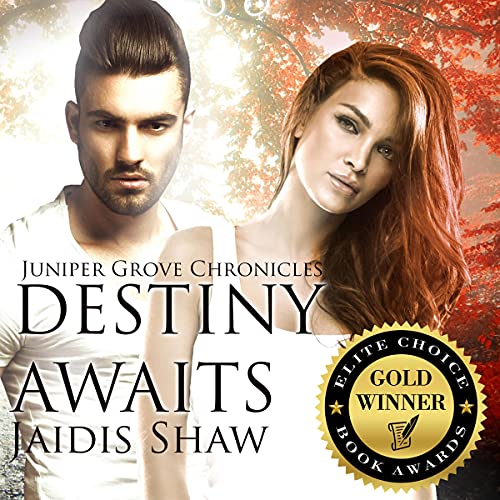 She wants a normal life. They want her dead. Destiny has other plans.

Twenty-year-old Alayna Scott receives visions around water, but even her foresight couldn't prepare her for the tragic accident that claimed the lives of her parents. With everything she loves gone, Alayna packs up and moves to the small town of Juniper Grove in hopes of starting over.

Jayden McKnight can't explain the attraction that he feels whenever Alayna is near, but he does know that he will do whatever it takes to win her heart. When a vampire selects Alayna as his next victim, Jayden will stop at nothing to ensure her safety - even if that means bringing Alayna into a world that she never knew existed.

Love blossoms, challenges are made, and Alayna will find herself fighting not only to survive, but to understand what she has become.

What listeners say about Destiny Awaits

yet another fantastic story written by the wonderful jaidis Shaw, and a superb narration by N. Ormerod.
I thought this was going to be a box standard romance but by the start of chapter 2 i knew this wasn't the case, the description of the characters and scenes were simple but effective, I was able to picture them clearly in my mind, which I love, this book had me hooked from line 1 and I can't wait to sink my teeth into book 2

I was pleasantly surprised to find the narration was improved from the last book I had listened to that was done by N Ormerod. There are still some general issues I have with it. There is a disconnect that happens during the narration where it becomes monotonous at times and while there are still awkward pauses and the odd inflection, it’s much improved.

As for the story itself, I loved the plot line. This is not a typical insta-love story in that Alaina’s gift has enabled her to “see” Jaiden from a very young age. Olivia was an instant dislike 🤣 But I’m sure that’s what the author had intended. I thoroughly enjoyed the fact that this isn’t your typical “shifter” romance where everyone is a werewolf. I’m looking forward to getting the books so that I can read them all and see what happens next lol I’m very curious to know what makes Alaina “different”.

didn't like the narration it felt robotic but the overall story was ok. I'm gonna reread on my kindle to see the difference in story

This story had all the feels, loss, new love, characters you love to hate!
Got this on audible and loved the narrators voice!
Can't wait to read or listen to the rest!

This was a nice listen while driving to work each day. I really enjoyed it.