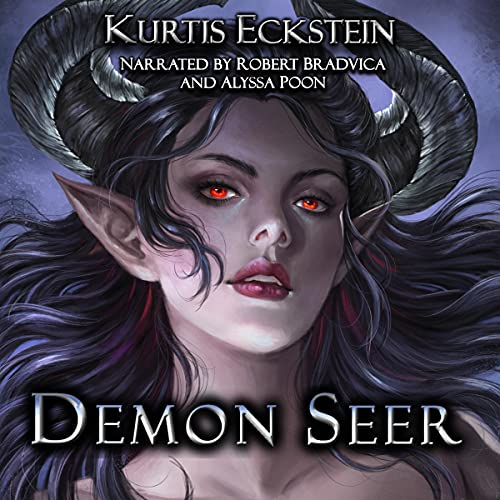 By: Kurtis Eckstein
Narrated by: Robert Bradvica,Alyssa Poon
Try for £0.00

Michael Thorpe had been considering asking his best friend Riley Sullivan to be his girlfriend, at least until he met another girl who instantly stole his heart.

The problem is, the object of his sudden infatuation isn’t exactly normal. She has horns, wings, and a tail...and to complicate matters, she might have a fatal interest in Michael derived from her need for human blood.

Will his newfound love interest lead to his untimely death?

Or can he find a way to make it work out between him and his demon girlfriend?

The scientist was already going down the line, the yellow meter making a soft static crackling as he went. The noise was quiet and consistent while he waved it in front of each student. However, when the man passed in front of the girl next to me, it made a noise that was slightly different for the first time.

The scientist waved it in front of her again, only to realize the change in sound only happened when he neared one side of her - the side closest to me. The guy then proceeded to wave it in front of my chest, showing that the slight change in static would disappear the moment he held it far enough to my other side.

I wasn’t sure how to react, having no idea the significance of the test, but now all eyes were on me.

Demon Seer is a full-length novel.

What listeners say about Demon Seer

FTB and cuckoldry, worst book I have ever tried

Wow, this is not only the dumbest storyline ever, but the least logical with the least to offer -light spoiler incoming-
MC falls not in love, but in to slavery with random demon, then is a cuck for an hour before FTB 'after our amazing night'
I expect better, this is literally the dumbest book I have read, and I am not someone who goes after writers for almost anything that isnt getting facts wrong, or not doing research, but wow this is another level of bad. Kurtis, come on man, how can you expect anyone to EVER trust you again after this?
GREAT NARRATION though, sorry production, you should have passed on this trashfire.
Wish I could get my credit back, but I think Audible will block me because I didn't expect to find the worst fictional book ever written.
This felt to me like someone stole the idea from 'Beautiful Creatures' made the young people as stupid as possible, and forgot how to make a story arc that isnt just deus ex machina, see it was always that way, you just didnt know yet even if it is impossible....

Well written. Its MC is a little too realistic in the way a teenager would act, very cringy, very high school. He really nailed that part, I honestly wish he hadn't gotten so true to form, I had too many high school flash backs. It just so happens that Im not a fan of teen melodrama. Solid story though, seems like it's building up to something cool, I'll get the next book to see where it's going. If you like mushy romances, you'll like this.

Can not believe how quickly I bought this one after reading it only a couple of weeks ago. Thoroughly enjoyed it and can wait to start on the second one.

Freaking outstanding, Great start to a new series! I love this new series far more than I expected I would. That is saying a lot since I so far have loved everything Kurtis Eckstein has written. If you are reading this review do yourself a favor and buy this book!

Couldn't get past the 1st 25 minutes of cringe. I will never listen to this author again.

I give it a maybe

The Mc can be annoying but I find the plot Interesting I hope the it gets better in the next one. Overall it’s an easy book to listen to with some funny moments

Not Sure About This One

I'm a fan of main characters (MC) that inspire and make you wanna be them. John Wick, Wolverine, Eragon (from the book), Avatar, and Goku just to make a few. Characters that adapt to the craziness thrust upon them, kicks ass, and gets the girls. This MC on the other hand literally spend the entire book throwing tantrums, stuttering apparently, and being 100% completely useless. He's literally a blend of Bella from twilight and Frodo from LOTR.
I'll try the second book but if it's roughly the same I'm returning both.