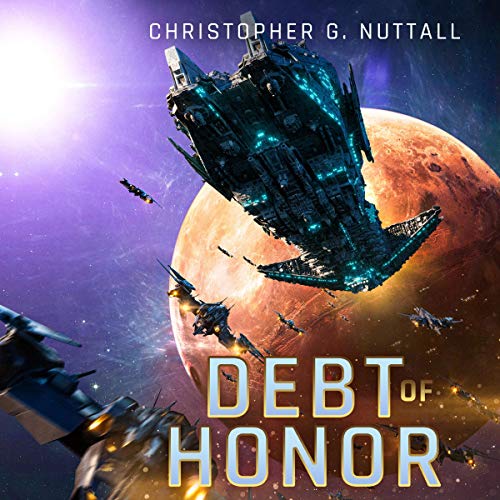 By: Christopher G. Nuttall
Narrated by: Lauren Ezzo
Try for £0.00

From the ashes of one galactic war stirs an ever greater threat in an epic new Kat Falcone series from bestselling author Christopher G. Nuttall.

A year ago, the war against the Theocracy ended. But it didn't bring peace.

Admiral Kat Falcone was lucky - her side won the war. But without an external threat, Kat’s homeworld government, the Commonwealth, begins to burst. The galactic war may be over, but there is a civil war on the horizon.

Meanwhile, the Theocracy is making one final, desperate bid for power. As the external threat looms and the internal threat grows ever larger, Kat and William will need to join forces in order to save the Commonwealth. But it may already be too late.

What listeners say about Debt of Honor

The usual military SciFi from Nuttall

I enjoy Nuttall's work, despite disagreeing with the political stance taken by his novels. In this series we have a skirmish with an evil theocratic fleet remnant - bad guys with a few honourable exceptions, clever and upright Dukes, an immature and power-grasping King and a naive war hero, lording it over the fearful and grateful serfs. There are a few obvious twists, wooden characters and poorly written prose, with stilted dialogue driving the linear plot. I loved it and listened to it straight through. You either like this stuff or you don't. I don't really care that it's written like a copy of the Valiant, it's entertaining.

The narrator wasn't to my taste, but I guess Nuttall is trying to appeal to the US market. She did okay with the material at hand, but didn't add anything.

Because the narrator has very few character voices she has to say who is speaking all the time
Really annoying and struggling to finish.

Good story spoiled by the narrator

I soldiered through this and enjoyed the story but the narrator was really annoying, some of the pronunciation was comical as if English is not their first language. I won’t be continuing the series as I could not face listening to that voice any more.

Very slow and borring, i gave up after 3 hours. Never experienced any attachment to any character.

Bought this book because I enjoyed the first few Ark Royal books. After 5 hours on Debt, I couldn't go further. I just finished listening to an hour of backroom political budgeting. Then there are the theocratic bad guys out to take down the infidel budgeteers and run off with their women. Throw in space ships to make it scifi. Others seem to like this so perhaps I missed something.

tThis book has a meandering storyline and basically just is feminist gender politics in a thinly veiled cover of sci-fi.

This is a new series based on the Angel in the Whirlwind Series that followed the career of Kat Falcone. The story starts approximately where the Angels in the Whirlwind Series ended. Peter, Kat’s brother, is now head of the Falcone industries and assumes the role of Duke in the planets monarchical system. Kat is now an admiral in charge of the frontier fleet. Her home planet looks as if it is heading into civil war and now Kat has discovered an unknown Theocracy fleet that is attacking the Commonwealth nations. Looks like the series is going to have lots of action.

The book is twelve hours and fifty-six minutes. Lauren Ezzo does a good job narrating the book. Ezzo was the narrator of the Angel in the Whirlwind series. Ezzo is a voice-over actor.

Not a Good Story - A Political Essay

This sounded like a rehash of the US's 2020 political scence projected as scifi.

I've tried this author before. Gave him another shot. Three rape mentions in the first chapter. I'm done. The narrator is fine.

This is the 3rd book I have listened to with the same narrator. Monotone, very hard to keep me interested in the story. Person said, I have compared the audio to 50 times she has said this and they are all identical, like she said it once and copy and pasted it every time, it also sounds just like family feud, survey says.

I made it 19 chapters and the story is good I think, all I remember is survey says! One chapter is very glitchy and could not understand anything.

I will buy the Kindle and read it and then update my review.

Could have been better

Please get a narrator that is less monotone. She has one female voice and one male and they are so close it's hard to tell them apart. The story itself is solid just a little too slow and repetitive.

This is the most boring book I have ever heard. I won't be buying any more books by this author.

It's a book without a body... Empty.. Just nothing to grab onto.. And empty of characters.. Nothing to like

So much repeating of info and there was the endless debt squabble. Narration was robotic....