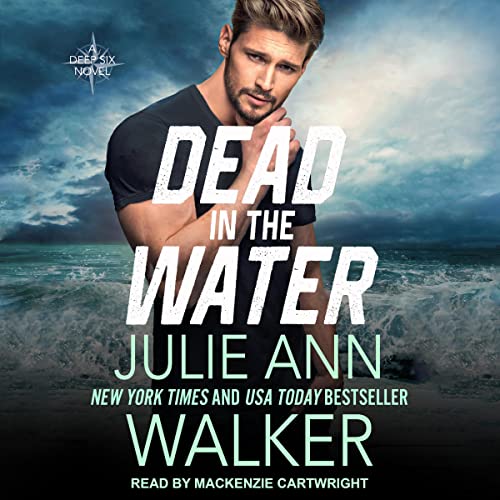 Dead in the Water

By: Julie Ann Walker
Narrated by: Mackenzie Cartwright
Try for £0.00

Dalton "Doc" Simmons is having one helluva week. First, archaic laws have kept he and his partners at Deep Six Salvage from recovering the sunken treasure they've been after. Second, an approaching hurricane threatens to scatter the legendary riches across the bottom of the ocean. And third, Deep Six's feisty, flirty attorney, Camilla D'Angelo, has just landed on Wayfarer Island, and she represents everything he can't stand . . . and everything he can't help but want.

One look at Doc and Cami knew she'd met the man of her dreams. The medical doctor-turned Navy SEAL-turned treasure hunter has it all—brawn and brains. The problem? He doesn't like her. But something tells Cami there's more to his bad-tempered brooding than meets the eye.

As the storm closes in, so does a boat full of dangerous men bent on claiming the centuries-old treasure for themselves. Doc must keep Cami close if he wants to keep her alive. But all that proximity turns up the heat on the chemistry bubbling between them. For Cami, it's more than a fight for her life, it's a fight for Doc's heart. If they survive, can she convince him to let go of his past for a chance at a future with her?

What listeners say about Dead in the Water

Wow what a climax to a fabulous series. It had everything. Drama, intrigue and suspense. I was so engrossed in listening I didn’t want to sleep. Lol. I’m sad the series is over but let’s fed seeing them all settled. I’m hoping one day we may get a glimpse into their future again.

Great wrap up to this series.

This was a great wrap up of the series, with a satisfying ending. I look forward to her next series whatever it may be. this series had strong intelligent women as well as definite alpha males.

Great wrap to an incredible series!

If you’ve been following this series, you know that this band of brothers, and one uncle, have been searching for a long lost Spanish galleon with treasure. In this final book, the treasure has been found and Doc is grappling with his impending return to his ranch in Montana. The lawyer, Cami, has been along for the treasure retrieval to ensure that it’s legally removed. This gives this pair some more time together. Although the chemistry is there, Doc can’t let go of his dead wife. Can there be an HEA when the efforts are one sided? To make matters more dire…a Hurricane is headed to the team’s island…oh, and some guys after the treasure too. Lots of action and romance.
The epilogue was fantastic! Great listen.