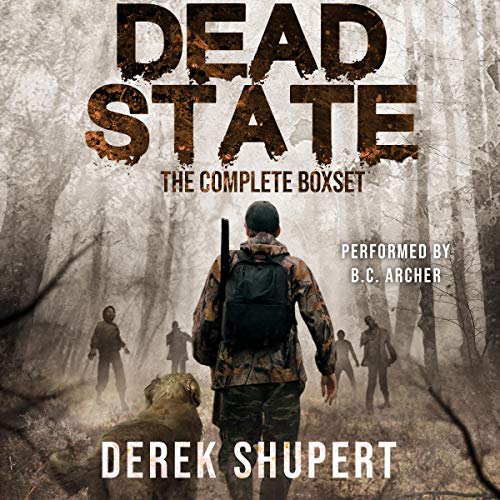 A prehistoric virus. An infectious primal hunger. Some discoveries are better left buried...

James would much rather hang out with his friends than go hunting with his father, the survivalist. What starts out as another uneventful trip, however, takes a hard turn for the worse when they’re attacked without explanation.

Panic-stricken and running for his life and trying to get back to his family, James and a handful of other survivors are forced to fight an enemy they cannot beat on grounds they do not know.

The odds are not in their favor, but if they want to survive, they must venture deep into the deadly unknown, right down to the heart of his ravenous horde.

Dead State: The Complete Boxset is an action-packed survival story focusing on fortitude, strength of character, and the power of community. If you like spine-crawling suspense mixed with post-apocalyptic grit, this is an edge-of-your seat tale you can’t afford to miss!

Dead State: The Complete Boxset is perfect for fans of David Simpson, Christopher Artinian, and Peter Meredith. Get all five full-length thrillers plus the novella Catalyst and start binge-listening to the series today!

What listeners say about Dead State: The Complete Boxset

it was a good story but clearly rote it a different language and some of it doesn't translate well into English... witch makes it difficult for the notation......

Couldn’t stop listening to it after the first chapter! Can’t wait for more content from mr Shupert

found it to be a book full of sentences,
I walked down the hall
I found a crowbar
I heard a voice etc etc etc
and an awful narrator that sounds like marge Simpson croaking through the book.

I loved this book but the kid really got on my goat at first being headstrong and whiney, then I realised that's exactly what a 15 year old would be like in his position, he matured with the story and is so likeable now, I need to see if there's anymore because I'm hooked.

I've never left a bad review before but this book deserves one.

The story had nothing going for it. It was the equivalent of a 13 year old writing an essay for school. The narration was even worse than the story line. Every adult male sounded like the same character over and over again. Basically this book has no redeeming qualities. Every single character is one dimensional (even the dog is irritating) and you really don't care if any of them survive

What a great series

I really really enjoyed listening to this audiobook and reading the book at the same time. I know it’s a clichè but it had me hooked from the first few pages. I wouldn’t say it’s a really fast paced book but it’s does have its moments and it never ever dulls. The bond between the main character James and his dog is great and glad of the outcome. I have nothing negative to say about this series, I listened to it in 2 sittings that’s how invested I was in the story.

That’s all I can say and I’ll miss the main character and the dog !

This review will be a lot shorter than what l have just listened too,if you like a challenge and love disappointment this is just for you!!

it was a great set of books, i sertanly hope there is more to come.

I’m not a big zombie fan but this was a good series. I liked the story line but found some of it a little far fetched. Overall it kept me entertained with the narration and the characters fight/will to survive.

it's a book series I would definitely recommend. My only hang up was James himself. He was great in the first book but it's like he got dumber and weaker as the series went on. He had trouble climbing a ladder for fricks sake. I get he's 15 but common sense to not just stand around day dreaming or yelling would be great. It was a great story I just would have left him behind.

This series of books drew me in and wouldn't let me go. Even the end had me wanting more.

A bit on the Mild Side - But LOVED it

Really got into this Story - and listened pretty much straight through while on a road trip. It really engaged me and now I want a Dog. Will need to look into that soon - great time to do it :) I definitely recommend this Audiobook.

Would make a great mini-series

Overall I did like this book however, this book would be easier to digest as a movie or mini-series. Almost couldn’t finish it at times was getting a little bit bored at times.I wouldn’t recommend reading it as a full box set because it was getting hard to listen too, but for TV it would make a great zombie apocalyptic film or mini -series.

good story other then main character

As others have stated the mc is very stupid he makes the same mistakes over and over then crys about it just to repeat later. I think we all forget this is a 15y old kid and not Rambo. The story was fun overall but with the beginning of the book it was looking like the mc would be a trained survivalist and not the immature kid he turned out to be, would have been better if he died saving his sister because that's just the more realistic outcome. yes I said realistic about a zombie book get over it.

Not just another zombie book.

This starts unlike other zombie outbreaks. The entire series is action packed. If you are looking for a new read, you found it here in this book.
The narrator really brought the characters to life. Highly recommend

Great goon, believable characters and great plot. Wasn't a fan of the ending but good

I really liked the story

I have no idea how this kid survived. When he wasn't sounding like a whiny kid and doing rash things or NOT doing what needed to be done, he was full of bravado and saying how he had to handle things better then goes and does something rash again. The rest of the characters were great. I look forward to listening to more by Derek Shupert.