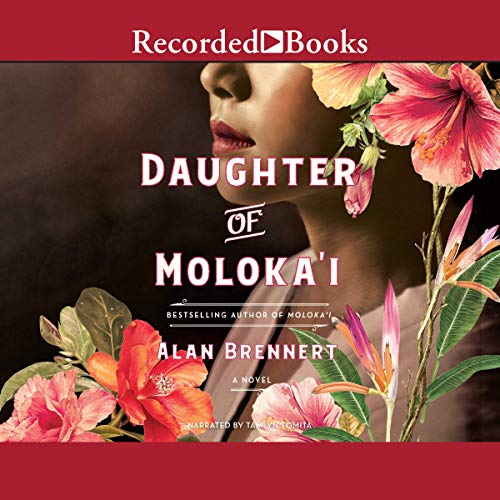 By: Alan Brennert
Narrated by: Tamlyn Tomita
Try for £0.00

Alan Brennert’s beloved novel Moloka'i, currently has over 600,000 copies in print. This companion tale tells the story of Ruth, the daughter that Rachel Kalama - quarantined for most of her life at the isolated leprosy settlement of Kalaupapa - was forced to give up at birth.

The book follows young Ruth from her arrival at the Kapi'olani Home for Girls in Honolulu to her adoption by a Japanese couple who raise her on a strawberry and grape farm in California, her marriage and unjust internment at Manzanar Relocation Camp during World War II - and then, after the war, to the life-altering day when she receives a letter from a woman who says she is Ruth’s birth mother, Rachel.

Daughter of Moloka'i expands upon Ruth and Rachel’s 22-year relationship, only hinted at in Moloka'i. It’s a richly emotional tale of two women - different in some ways, similar in others - who never expected to meet, much less come to love, one another. And for Ruth, it is a story of discovery, the unfolding of a past she knew nothing about. Told in vivid, evocative prose that conjures up the beauty and history of both Hawaiian and Japanese cultures, it’s the powerful and poignant tale that listeners of Moloka'i have been awaiting for 15 years.

What listeners say about Daughter of Moloka'i

Read Moloka'i then Daughter of Moloka'i

As I hoped, I loved this book! Daughter of Moloka'i, published February 2019, is a continuation of Alan Brennert's wonderful book, Moloka'i, which was published in late 2004. I purchased "Book #1" in an airport in 2005 because I am a regular visitor to the island of Maui, Hawaii, and I liked the cover of the book! (Yay, Art Department!) That was such a wonderful story that I actually sent a handwritten letter to the author to tell him how I felt about the main character, Rachel Kalama, and that I thought he should sell it as a miniseries! He wrote back to me, thanking me for taking the time to write. (Today he actually replies to Facebook comments about the new book!) I have recommended that first book to countless people who have all been swept away by the story.
Fast forward to 2018 when I read that Brennert was finishing a follow up book focused on the life of Rachel's daughter, Ruth. Rachel was required to give her "Hapa" (mixed/half) Hawaiian & Japanese daughter up for adoption just hours after she was born, knowing that Ruth would live a life of freedom, unlike Rachel, who was sent to live at Moloka'i's Leper Colony when she was a little girl. Ruth, however, was living in CA just after Pearl Harbor was bombed, and people of Japanese descent were relocated to internment camps for sometime afterward, her freedom also temporarily gone.
Daughter of Moloka'i has a full cast of rich characters that you can become emotionally invested in. It is also a joy to become reacquainted with characters from the original book again, not limited to Ruth's mother Rachel.
I listened to this book via Audible (14 hours 20 minutes) narrated so wonderfully by Tamlyn Tomita, who I recognize from the TV show "The Good Doctor." Both books are rich, historical fiction, and I learned a lot from each one. The information about the Tanforan "Assembly Center" in Daughter of Moloka'i was especially interesting because I live minutes away from the location, which is now home to a shopping mall. I would definitely recommend reading book 1 then book 2, but if you like quality fiction, you will be pleased with these.
I will never forget these characters and their stories. Mahalo, Alan Brennert, for bringing Rachel Kalama back to us to finish both her story and Ruth's.

This review will also be posted on my Goodreads review page.

I should have eye read this book rather than ear read (listen). I found the reader to be unbearable and found myself rolling my eyes, wincing and being downright frustrated with the performance. Usually I stop a book when the reader is horrible for me but I was on a long road trip and was super curious about the internet camp part of the book - a neglected area in American History. Perhaps the story was better than I am rating it but I could not get past the readers’ influence on the story with the weird voices, stuttering interpretations of conversations and imposed emotions. Ultimately I should have stopped listening and downloaded a different book because I am not leaving this book with the same good feeling I had after eye reading Moloka’i.
Book 2 focused on the family ‘s internment which despite the reader I found fascinating in that I don’t know a whole lot about that part of American History.

This book was so well read by Tamlyn Timor’s. I grew up in Hawaii and have been to Kalaupapa. I felt like I was there many times during the story. Bravo to the author and narrator!

Not as good as first book

I did not care for the audible reading of this book. The narrator had these terrible voices for the different characters and I felt like a toddler being read to. The story was very long - the last part drug
on too long.

I couldn’t believe this was written by the same author as his first book. The writing is stilted and the characters are uninteresting. The performance is terrible making it extremely difficult to listen to. She uses weird accents, especially for the children. I am going to return this book rather than finish it.

I loved Moloka'i and was looking forward to the sequel. I wish I had read this book rather than listened to it, which is rare for me. Often the reader adds color to the book. This reader had the most awful accents and voices for the characters. It really turned me off the book and I almost stopped listening. I did make it through the book and think it is possible that the story would have been OK if I had read it. But when listening to it, I was completely turned off by the pigeon English used and the high-pitched childrens' voices. The reader made the Japanese adults sounded unintelligent, even when they would have been speaking Japanese to each other. There were weird pauses between words and poor grammar even when they would have been speaking their native language to each other (presented in English in the book).

I was very disappointed. Read this book; don't listen to it.

The narration is Awful!

This narration is SO irritating! The book is lovely but I am not sure I can listen to it. This woman’s voice is grating when she try’s a child’s voice. Also her mouth sounds so dry ..., seriously drink something! Molokai was perfect not this. I have not even listened to the full first chapter.

This was a touching and poignant follow up to the original Molokai book. The fleshing out of Ruth’s life from childhood to the end was fantastic. The history woven through the book was just as good as the first book.
Make sure you have tissue, I made the mistake of listening to the end while going my makeup, big mistake.
You can’t miss with this book.

One of best books I’ve ever read

Daughter of Molokai is one of the best books I’ve ever read. Exquisite character development, and extremely important historical information about the plight of Japanese Americans during World War II.

The story had a different feel from the first one. I had some difficulty getting into it at first, but the ending really came full circle. A beautiful tale of love, acceptance and understanding.