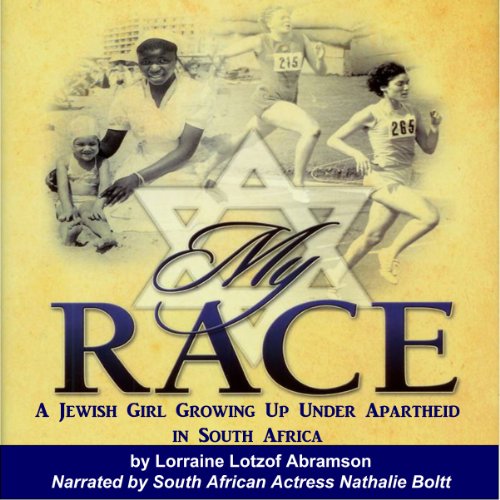 By: Lorraine Lotzof Abramson
Narrated by: Nathalie Boltt
Try for £0.00

My Race is the memoir of a gifted Jewish athlete growing up under the apartheid system of South Africa.

As both an outsider excluded from the conservative Christian mainstream and an insider who reaped many of the benefits of a society founded on white supremacy, South African track star Lorraine Lotzof Abramson had a unique vantage point on the apartheid experience.

Her grandparents left Eastern Europe to escape oppression, only to find themselves in another oppressive society. This time, by virtue of their white skin, they were on the same side of the fence as the oppressors. Lorraine's first-hand account shares her ambitions, her achievements, her losses, her family ties - and her growing unease with the system of social inequality that simultaneously excluded her and celebrated her.

She eventually closes the door on the South African chapter of her life by immigrating to the United States, while her family remained in South Africa. Along the way, Lorraine learns that the real race - the marathon that is a long and eventful human life - is a journey towards compassion.

What listeners say about My Race

The South Africa that was....

What made the experience of listening to My Race the most enjoyable?

The writer's description of the early life on a small farm in South Africa without water or electricity. Her progression from running bare foot at age 5 and unexpectedly winning races against big 11 year old boys. To becoming a champion of champion on the track.The Narrator brought the book alive.

The Narrator brought the book and the story to life. The clarity and accents of the characters were superb.

I listened to it at every available moment, some of the sections more than once. Description of the writer's early life on a small South African farm, one could visualize life in those days. The writer's unexpected running capabilities, followed by her joy in running and the many brilliant brilliant awards then received. Romance and marriage to her American swimming champion. Life in America (so different from South Africa). One section I read four times was the writer's trip to Latvia with her 88 year old father - incredible, descriptive and harrowing. I strongly recommend the book.

More than one person's life

This story, very well read in the authentic South African accents (a rarity), while representing one family's sincere story, echoes the experience of the many families who emigrated from Europe to South Africa then on to North American in subsequent generations, especially those who left South Africa because of the injustices of Apartheid. Well done!

Loved this book. Thank you for sharing your story - brought back so many memories of my childhood. It’s a great read for the older South African.

Not really about Apartheid

Would you try another book from Lorraine Lotzof Abramson and/or Nathalie Boltt?

What could Lorraine Lotzof Abramson have done to make this a more enjoyable book for you?

I was led to believe she would be more involved in apartheid, but there was very little to do with apartheid. It was just an autobiography of a young Jewish girl who lived in South Africa during apartheid. The book was fine, the subtitle is totally misleading. In fact, Lorraine had pretty much a dream life, no struggles, no trials... almost perfect. Wealthy, family support, athleticism, perfect marriage, fairytale in fact, healthy children... her only issue was that in the background of her life apartheid existed, which didn't fit the rest of her perfect life. Don't get me wrong, happy for her! And having aged parents die is not sad, that the part of life that we celebrate that they had a great life, she tried to turn that into a tragedy. When her family punched a young boy in the face several times for not listening to a entitled white child, that was sad! She's a nice person, but her story was gloriously BORING!

The book was well written and the narrator was very good.

Would you consider the audio edition of My Race to be better than the print version?

The reader did an outstanding job. The sincerity with which she voiced the emotional feelings of the author and her different accents were all quite outstanding

What was one of the most memorable moments of My Race?

How she decided to break off her engagement and decided to marry the man that she did.

What does Nathalie Boltt bring to the story that you wouldn’t experience if you just read the book?

Portrait of a Wasted Land

What did you love best about My Race?

Listening to the story through the performance of the narrator, Nathalie Boltt, truly engaged me as a listener and brought it fully to life.

The most wonderful aspect of the story was to find so many points on which to relate to. It is a story of my homeland and took me to the places in which I grew up.

Have you listened to any of Nathalie Boltt’s other performances before? How does this one compare?

Yes, I have heard other performances of Nathalie's and felt that this particular narration has added a new level of greatness to her work. She was so compelling and vivid with her interpretation of the accents and through this, a great energy was injected into the story.

For me, the most moving moment in the book was when Lorraine's mother states, "We're living in a fool's paradise." A chill ran down my spine as I heard the words performed by Nathalie and reflected with a great unease of the decades that followed.

On the eve of Nelson Mandela's life this is indeed a poignant and haunting story to hear. The irony and sorrow portrayed so beautifully, brings the world of dichotomies that is South Africa, to the front and centre of the stage. Bravo.