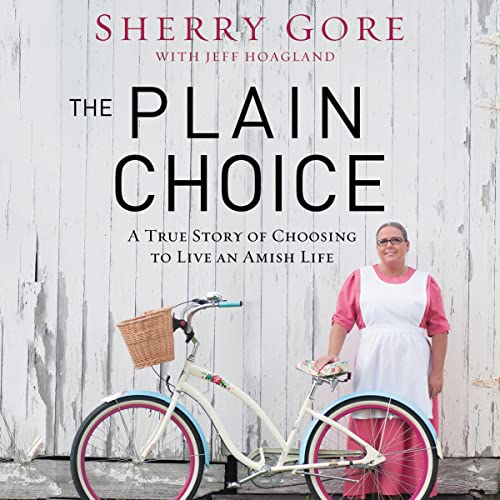 By: Sherry Gore,Jeff Hoagland
Narrated by: Connie Barton
Try for £0.00

Raised in a broken family and emotionally overlooked, Sherry Gore grew up without a solid foundation, a prisoner of her own poor choices, and at times without hope. A series of terrible mistakes left her feeling wrecked and alone, and a sudden tragedy threw Sherry into an emotional tailspin too powerful to escape.

Sherry hangs by a thread, unable to see how she can go on living, until it happens: On a morning of no particular significance, she walks into a church, and bam - the truth of Jesus' forgiving love shatters her world and cleaves her life in two. She goes to bed stunned; she wakes up a Christian.

Unwilling to return to the darkness of her former life, Sherry attacks her faith head on. Soon the life Sherry Gore remakes for herself and her children as she seeks to follow the teachings of the Bible features head coverings, simple dress, and a focus on Jesus Christ. Only then does she realize, in a fit of excitement, that there are others like her. They are called Amish and Mennonite, and she realizes she has found her people.

The plain choice that Sherry makes is not easy - and life still brings unexpected pain and heartache - but it changes everything for her, as she becomes one of the few people on Earth to have successfully joined the Amish from the outside.

She has found her place. And her story proves that one can return from the darkest depths to the purest light with the power of God.

What listeners say about The Plain Choice

Loved this book! An inspiring read.

Sherry's story is a powerful witness to how God can transform a life! I loved hearing about her conversion to Christianity and how she transitioned to the 'plain' way of life. She is very honest about her life prior to finding her faith and that is what makes her story all the more interesting. Her life before and after couldn't be more opposite. In her 'new' life, it is clear she found her true self and although finding her faith didn't make her exempt from the trials of life, it is evident that she gained renewed strength and found peace on life's journey.

Sherry's openness and honesty was just what my soul needed. I so am grateful she told her story. This was an excellent book.

Hard to put this book away!

I have been following Sherry on Facebook but had no idea how she chose to live the Plain life or what led her to make this choice. After this book and learning what all she went through I’m so glad she has found peace.
Each little or major turn in her life the book drew you in. Many heartbreaking issues and then of course the major one, in my opinion, the loss of her daughter.
Many tears were shed yet the book brought joy and peace to my life also.
Hope others take the time to read this book.

It was her story and you learn to appreciate the life and struggles she shared. The story is sad and slow going. You have to be in the mood to hear the sad story as you may relate or know others who have faced trials.

So heartfelt and wonderful!

I would recommend this book to anyone that wants to understand an explorers heart in search of something greater then themselves. This dramatic and heartfelt story was well worth the read/listen!! It did not disappoint t - thank you Sherry!

This book was just what I needed. the narrator was a perfect fit for the story. the story itself was poignant and kept my interest all the way through. my only disappointment was when it ended 😊