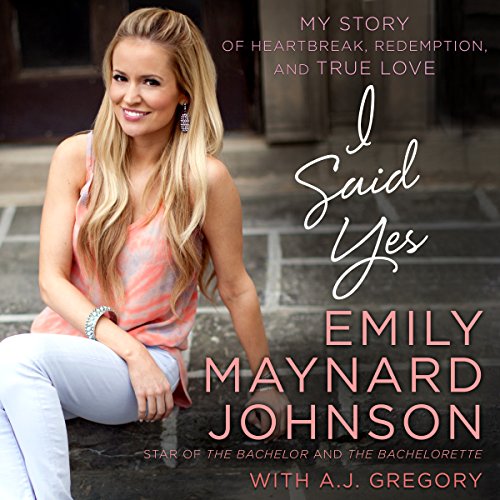 By: Emily Maynard Johnson
Narrated by: Hayley Cresswell
Try for £0.00

Learn more about the new "Bachelor" Arie Luyendyk from one of the people who knew him best – "Bachelorette" Emily Maynard Johnson.

Millions know Emily Maynard Johnson from her unprecedented double appearances on The Bachelor and The Bachelorette. Millions also know that neither of the relationships from those shows lasted much longer than a commercial break.

Overcome with embarrassment following her nationally televised failures at romance, Emily finally committed her heart to the only one she knew would never leave her empty and alone. Abandoning her desire to be chosen by men and finding peace in the fact that she was already chosen by God, Emily found the joy she had been looking for in serving God.

In I Said Yes, Emily tells the story of her life before and after reality TV fame, describing the profound new reality she discovered when she forsook fame in favor of the Lord. At the end of a long, fruitless search for a man, this courageous young woman found the truest love of all waiting right in front of her. To that love, Emily said yes.

What listeners say about I Said Yes

I enjoyed this book it was interesting, The last chapter was powerful, Emily and Ricki finally got there happy ending and Tyler sounds great too after all the ups and downs that Emily has had to read/hear that after all that she found God which is the best love along with Family is nice to hear. Emily is also my favourite Bachelorette because her season was one of the best ones some seasons have been boring.

Wow just wow. I wish the book could have gone on and on. Really enjoyed it

I really enjoyed hearing the behind the scene take on what goes into the making of the bachelor and bachelorette series and also how Emily's real life has shaped her into the person she is today. I would have preferred she had narrated it herself though after being on tv and people knowing how you talk and sound the narrator didn't match Emily's personality. This would have made it way more enjoyable to listen to in my opinion if you are a fan of hers.

Book is about Emily's life and journey in finding God and ultimately love. I wish the book had provided more tips and information for HOW she got through the hard times, HOW she grew closer to God, not just simply that she did. I think Emily has a great story that could help a lot of people in similar soul-searching situations, had she gone there. Maybe she'll write another book :-)

I always loved Emily on the Bachelor/rette but I didn't know she was this cheesy in real life. The story was ok, and I appreciate her being so honest about the experience of losing her fiancé. That made me feel for her. I just could have gone without some of the stuff that sounded like it was purely there to clear her name.

Duh clueless & holier than thou

Pill popping, self centered and spoiled brat. Boooring even more than her dates on the bachelor & the bachelotette. Don't waste your time

Emily thank you for sharing your life and your Faith. I was blessed by your book.

Emily's boldness and openness to share her story is so brave and makes her so much more beautiful than the physical beauty the Lord has blessed her with. I needed to hear this and have so enjoyed following Emily's story from her season on the Bachelor with Brad. Emily, at the end of your book you say it isn't your place to change people (it's the Lord's job:) I can tell you with all certainty that your book is and will change lives both now and in the future! I am so happy that God brought you Tyler! I pray for blessings on you both! Thank you for being such a beautiful example to young women everywhere!

I could not relate to her overly perfect childhood and the narration was WAY to subtle. Being a fan of the Bachelor, the voice did not relate well to Emily's character.

I had no idea what Emily’s true story was until now. To this day she is mentioned more than any other person on either show. A lot of men fell hard for Emily and they still mention her to this day 5 years later. She puts missing pieces together in this book. To my surprise she really isn’t a stuck on herself snob that doesn’t care about others. She really cares and is an inspiration to us all. Thank you for writing your story! Now I have to look up the latest on you, Tyler and your family! Congratulations for finding God’s will for your family and doing what it takes to make it all work.

Great, but I wish I would have read it in print

I LOVE audio books. Ever since I became a mom to 2-under-2 (plus a preschooler and 3rd grader), audio books are the only way I can enjoy one of my most beloved hobbies; reading. That said, this is one book I wish I would have read in print. Emily didn't narrate it, and while I knew that before I started, it just was weird hearing Emily's story told by someone else. Like if you were watching the Bachelorette and some other girl was doing her voiceovers. (By the way, she is just a tad annoying.) It made it less enjoyable. But I loved the message, the story, and of course her happy ending! I would definitely recommend the book- but if you loved Emily on TV, I would recommend reading it the old fashioned way.

I really enjoyed this book, I couldn't put it down in 2 days! Simple but nice narrative of Emily's life, that's helps viewers understand this woman who hid so much and obviously was embarrassed with her past. Praise god for redeeming her life and giving her the love she always dreamed about!