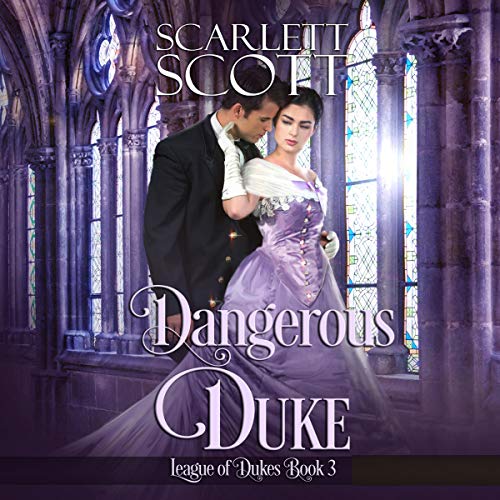 By: Scarlett Scott
Narrated by: Rosalyn Landor
Try for £0.00

Suspended from his work as an agent for the Crown, Griffin, Duke of Strathmore, exists under a dark cloud of suspicion for crimes he didn’t commit. He’s on a desperate race to clear his name by any means until a grave error lands him under house arrest with the last sort of distraction he needs.

Lady Violet West is about to be married to the most boring man in England. When the disgraced Duke of Strathmore lands in her lap - literally - she decides he’s the answer to her longing for adventure. Although her brother is convinced of Strathmore’s guilt, Violet isn’t as certain. Griffin doesn’t want her interference.

Violet won’t take no for an answer. So begins a secret partnership between the fallen duke and the determined lady. Their quest to uncover the truth leads to danger and desire. But the most perilous risk of all is losing their hearts.

What listeners say about Dangerous Duke

What a delightful story. Great characters, very funny and I can't wait to read the next in the series.

The descriptions of the sex scenes are explicit, so if you don't like that you should skip it.

My. first Scarlett Scott, but definitely not my last! Enjoyable characters made more so with witty dialog!

This is such a fun and delicious book! Full of wit & humour (I adored Lord Flowerpot & Aunt Horrible”), tears, and a couple I loved—you’ll love Violet & Griffin!

Dangerous Duke is good. I may like this one the best so far. From the beginning there is humor and a nice feel to the characters. Once again the individual's background affects who they become as adults and in all three stories so far, they are very different. This book is steamy as well.

The only thing that was tough for me is the F - bomb as I know they didn't use that word back then. Other wise it was a wonderful story.

I'm trying to finish this book, if it weren't for the narrator I would have already given up. the majority of the book is repetitive inner dialogue. the plot could be good if the story would get on with it. if you like books with 80 to 90% angst filled self talk then you will love this book.

Again this book fits in perfectly with this series. Turns.out the color.putple is my favorite as well. Too.bad her eyes were not violet.as well.

Although sometimes offensive language is necessary, I didn’t see the necessity in this book. Didn’t finish the book.

This is my first Scarlett Scott book. Great story but seriously struggling with this Rosalyn Landor as the narrator. Holy Mackerals her attempts to sound like a man is disgusting. Such a turn off to the whole book.

I rarely don’t finish a book but with this one I found myself drifting off thinking of other things i could be doing rather than listening. This tells me the plot didn’t grip my attention, the narrator didn’t spark my interest, and there was so much detailed sex it totally took away from the story. I only got through chapter 14 and I finally gave up trying to concentrate on the story.