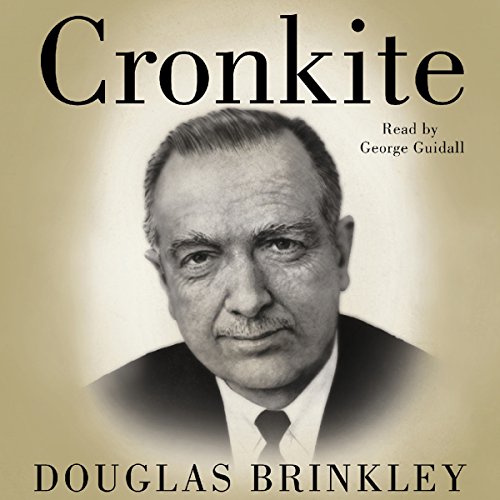 By: Douglas Brinkley
Narrated by: George Guidall
Try for £0.00

For decades, Walter Cronkite was known as "the most trusted man in America". Yet this very public figure was a remarkably private man. Drawing on unprecedented access to Cronkite's private papers as well as interviews with his family and friends, Douglas Brinkley now brings this American icon into focus as never before.

Brinkley traces Cronkite's story from his roots in Missouri and Texas through the Great Depression, during which he began his career, to World War II, when he gained notice reporting with Allied troops from North Africa, D-Day, and the Battle of the Bulge. In 1950, Edward R. Murrow recruited him to work for CBS, where he covered presidential elections, the space program, Vietnam, and the first televised broadcasts of the Olympic Games. Cronkite was also witness to many of the most profound moments in modern American history, including the Kennedy assassination, Apollos 11 and 13, Watergate, the Vietnam War, and the Iran hostage crisis.

Epic, intimate, and masterfully written, Cronkite is the much-anticipated biography of an extraordinary American life, told by one of our most brilliant and respected historians.

What listeners say about Cronkite

One of the Giants

This was my first Audible book, and it was a terrific way to start. Like any good biographer, Brinkley provides a sense of history, culture, and setting as he tells Cronkite's story. To me, the most interesting aspects of the book involved Cronkite's role in creating what would become the standard format for the evening news, political convention coverage, and special bulletins (including the iconic moment when Cronkite confirms the news of the JFK assassination). The jostling for ratings between the networks, the forging of news standards (e.g. what kind of delivery, scripted or unscripted, is most appropriate for television news?), inside battles between Cronkite and other famous egos at CBS News, all provide rich material in this biography. They made it up as they went along with this new, unfolding technology....figuring out what worked and what didn't as television journalism evolved...and Cronkite was in the midst of virtually all of those decisions and developments.

Douglas Brinkley did a good job of presenting the facts of the father of T.V. news broadcasting. Brinkley pointed out both the good and bad facts about the man. He gives us a glimpse into the life of Walter and Betsy's family. The book covers Cronkite from birth to death. I had recently read "Cronkite's War" about his work for UP in World War II and some of that is covered in this book. Most of the book is about the pioneering work to start up T. V. news broad casting. It is amazing how much of modern history Cronkite reported on and all the famous people he worked with, reported on or knew. I was unaware that Nixon went after Cronkite the same as he did the Washington Post and its people, turning the IRS loose on them as well as creating problems and paperwork regarding all federal license etc. I was interested in the comments he made about Christiane Amanpour and her ability as a reporter. She is one of my favorite reporters so glad I chose well. The book was read by the master narrator George Guidall. If you wish to learn the history of news reporting this is an excellent way to do so and learn about 20th century history. I enjoyed the book.

A fine insight into a man who influenced many

A sharp snapshot of a man who interrupted critical events to Americans and the world.

"Cronkite" gives a new perspective on a favorite newscaster. It was well researched and the reader was delightful.

WHat a great book

If you could sum up Cronkite in three words, what would they be?

The whole thing. HIs Childhood, His passions, How he got to where he wanted to be. His ethics. It all made Walter Cronkite the most respected man in Journalism and the most famous news anchorman in the world. WIsh we had him back.

What does George Guidall bring to the story that you wouldn’t experience if you just read the book?

yes if I could have I would have

There will never ever be another Walter Cronkite.
And Journalism has never been the same since.

The narrator sounds like he's reading this book to a 3rd grade class.

If you could sum up Cronkite in three words, what would they be?

Historical references as the backdrop to his life

Have you listened to any of George Guidall’s other performances before? How does this one compare?

The hero we need

This is a great book about a great journalist. More young reporters should be exposed to this story for the benefit of the profession and the people it serves

Compelling Reminder of What News Coverage Used To Be

This history of Cronkite's life and career was a wonderful journey through major world events and the evolution of TV news coverage. Every sentence was interesting and left me wanting to hear more. And as always, reader George Guidall delivered.

What a great book about a well known person. His passion for all things news was one of a kind!