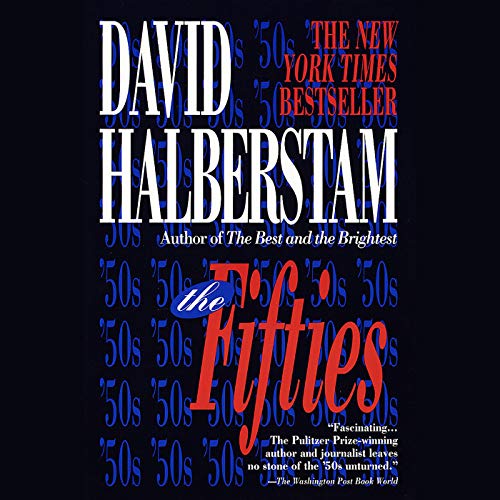 By: David Halberstam
Narrated by: Robertson Dean
Try for £0.00

The Fifties is a sweeping social, political, economic, and cultural history of the 10 years that Halberstam regards as seminal in determining what our nation is today. Halberstam offers portraits of not only the titans of the age: Eisenhower, Dulles, Oppenheimer, MacArthur, Hoover, and Nixon; but also of Harley Earl, who put fins on cars; Dick and Mac McDonald and Ray Kroc, who mass-produced the American hamburger; Kemmons Wilson, who placed his Holiday Inns along the nation's roadsides; U-2 pilot Gary Francis Powers; Grace Metalious, who wrote Peyton Place; and "Goody" Pincus, who led the team that invented "the pill".

What listeners say about The Fifties

This is a long book but absolutely brilliant. It shows how America ruled the world in the 50s economically, militarily and culturally and laid the foundations for the coming years. A whole host of characters good and bad from the the worlds of politics, TV, radio, sport and food. I loved it and you will be well rewarded regarding this under appreciated decade in America.

one of the very best

I have listened to hundreds of audible books, and this is without question one of the best.
Halberstam's writing, coupled with Dean's reading is sublime perfection-if you will excuse my redundancy.

At 34 hours it may seem daunting to begin, but I was longing for more at its end.

A hearty Bravo to both for this gem.

I loved his book on Korea and was really looking a similar feeling from this book. I had just finished a book on Dulles Brothers and Eisenhower post WWII and a book on the French in Indochina and figured this would be a great book to add to that reading. However, Mr Halberstam let me down with this book because of what he left out of it as he told the stories. Halberstam is a great writer and story teller which why I'm so mad at this book. In this book he chastises a newspaper for a bias of omission but this book is full of bias by omission. I'm also surprise other reviewers haven't commented on it since seem very important for the story and more important for people to have all the information on subjects he chose to write about.

Here is a list of politicians named in this book that Halberstam was either unable to figure out what their party affiliation was chose not to add it to the book.

All these individuals are or were Democrats in the Fifties. This omission really removes a key fact from the story that should have been written about. How do you talk about these individuals as politicians in the capacity of Governor, Senator, etc and leave out that key fact?

He made sure you know that Joe McCarthy was a Republican I think it went something like this "the Republican Joe McCarthy, the Republican Senator from Wisconsin". Halberstam wasn't consistent in his writing because of this and it really makes in analysis of anything political suspect for this reason.

I loved his writing about the new industries that started in the Fifties MCD, Holiday Inn, etc and I think if he would have been consistent on either not telling you party affiliation or making sure you know every politician named in the book affiliation this book would have been excellent.

Each chapter is a delight. It either explains something you have heard of all your life but never really knew much about, or it vividly recalls something dear to your heart. Anyone born in the 50's will find this book fascinating.

What a wild ride!

This book focuses on individuals who lived in and helped bring about a revolution - actually many revolutions - in American life. It really is eye opening to learn what was really happening when we were growing up. Superbly written.

Best book of the year

Scholarly and down to earth this book is full of wonderful memories and insight into the post World War Two decade. I thoroughly enjoyed every minute of this astounding book.

The author did his work! it's a fascinating decade

I knew of the author. David Halberstam, from his book on the Kennedy administration, "The Best and The Brightest." However, this book about the "Fifties" climbs into every nook and cranny of the '50s and it's happenings. From the start of our "on the ground involvement in Vietnam (and why) to the convention that picks Kennedy to run against Nixon. In particular, I found the Korean War section very enlightening. I came away thinking that Eisenhower was a very good president of our USA. I was born in 1956. So, the actual events were before my remembrances started. That's why I thought I'd try this book. The other thing to mention is that the author is a journalist and writes from that perspective. The reader is a good match and gets every word correctly pronounced. Also, the reader is a good actor when he needs to be. The actual beginnings of the book nicely unpack the Brown v Board of Education Supreme Court decision (9-0). And throughout the book, Halberstam pays close attention to every part of the Civil Rights movement that occurs during the '50s. I'm going to go out on a limb here. I believe that the author is one of the 20th centuries' best. Bar none. He worked hard. And it paid off. I may purchase the hardback for my physical library. It's a fabulous listen and probably a great read as well as listen. Enjoy!

A MUST listen, read and enjoy!

As a graduate with a degree in US history I was quite skeptical of a 34 hour audio book with some of the reviews about "too much politics". I splurged as I had a lot of Audible credits to use. Needless to say I could not be more pleased! This book is fantastic as a book. I bought the text to primer myself for the audiobook. I'd seen the History Channel series way back in the late 1990's so the framework was there. Neither the book nor the videos alone are a comparison to Robertson Dean's narration of the text. Wow, WoW, WOW! Yes, you have to love Robertson Dean's narration style but how can you not with this fantastic subject? His rendition of The Power Broker and this are FANTASTIC! Enough said on that.

As for the content of the book or audio book I was blown away with detail. Sure, for a quick read or listen these are not the book. For those that want a thorough understanding, read or listen to this. Also view the History Channel videos. I wish this book, audiobook and video series had been around when I did my undergraduate work in the early 1980's.. Every fact was spot on to what I learned through my own research.

Thank you David Halbertam and Robertson Dean for a great Audible Audiobook!

A turning point in many ways…

The book is long but worth every minute! The foundation for much of our current country, from Elvis to Cuba, is covered. Well worth a listen.

One of the best books I've ever read!

I read this book my senior year in high school and loved it! I was thrilled to find it on audible. Prior to reading this book as a kid in the early 90s I thought the 50s were boring and the '60s were the cool decade. While I still think the 60s wete an incredible time period this book will totally open up your eyes to all that was going on in the 50s and illustrate how it was a prelude to the 60s with so many seeds being planted politcally, socially, culturally...
I remember when I finished "The Fifties", close to 30 years ago now, that I couldn't wait for the follow-up. But, it never came. not sure why Habersham never wrote the sixties.
I would encourage anybody who loves history to get this book and get lost in it. I guarantee you will love it!
My only slight criticism is the narrator talks extremely slow. I pumped it up to 1.4 speed and it sounds normal. So, problem solved easily enough.

Too much about the political during the 50’s.

Narrator is good. Content emphasizes covering the political of the era. I was disappointed author not writing more content about the 50’s beyond the political.