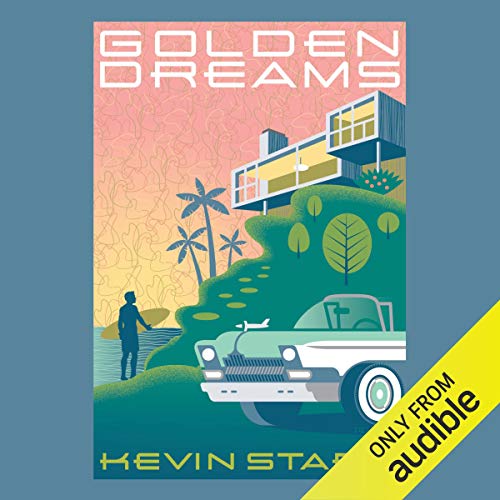 By: Kevin Starr
Narrated by: Elijah Alexander
Try for £0.00

A narrative tour de force that combines wide-ranging scholarship with captivating prose, Kevin Starr's acclaimed multi-volume Americans and the California Dream is an unparalleled work of cultural history. In this volume, Starr covers the crucial postwar period--1950 to 1963--when the California we know today first burst into prominence.

Starr brilliantly illuminates the dominant economic, social, and cultural forces in California in these pivotal years. In a powerful blend of telling events, colorful personalities, and insightful analyses, Starr examines such issues as the overnight creation of the postwar California suburb, the rise of Los Angeles as Super City, the reluctant emergence of San Diego as one of the largest cities in the nation, and the decline of political centrism. He explores the Silent Generation and the emergent Boomer youth cult, the Beats and the Hollywood "Rat Pack," the pervasive influence of Zen Buddhism and other Asian traditions in art and design, the rise of the University of California and the emergence of California itself as a utopia of higher education, the cooling of West Coast jazz, freeway and water projects of heroic magnitude, outdoor life and the beginnings of the environmental movement. More broadly, he shows how California not only became the most populous state in the Union, but in fact evolved into a mega-state en route to becoming the global commonwealth it is today.

Golden Dreams continues an epic series that has been widely recognized for its signal contribution to the history of American culture in California. It is a book that transcends its stated subject to offer a wealth of insight into the growth of the Sun Belt and the West and indeed the dramatic transformation of America itself in these pivotal years following the Second World War.

What listeners say about Golden Dreams

One of the best history books I've listened to

I thoroughly enjoyed this book and wish the rest of the volumes in this remarkable series were also available in audiobook form. Starr's approach is a combination of survey and deep focus, covering the broad trends in the state's development during this period through a series of in-depth treatments of people, places, and cultural and political aspects. So he covers everything from the design and construction of freeways to the economic and racial tensions arising from the growth of Los Angeles to the origin and success of West Coast jazz. Along the way, he provides wonderful sketches of characters such as Roger Revelle, Dorothy "Buff" Chandler, Dave Brubeck, and Edmund G. "Pat" Brown (Jerry Brown's dad). The range, diversity, and continuing interest of the material is exceptional. Since listening to this, I've found it tough to find another audiobook that comes up to this standard.

Dear Audible Studios: please put the rest of Kevin Starr's "Americans and the California Dream" series on your "To Do" list.

Give us more Starr on California!!

Would you listen to Golden Dreams again? Why?

Yes. There is so much detail, its hard to take it in and ponder on the first reading.

He was very good except for his annoying attempts, when reading a quotation in the book, to imitate what he thinks that author would have sounded like. Universally lame. This is not fiction, so voice characterizations are unnecessary. Lose the whole attempt in the next books.

I've been waiting ever since becoming an Audible listener for recordings of the Starr series on California social history. This is the first volume. Give us more...PLEASE...and soon. Anyone interested in California as a place and a culture will enjoy Starr's narratives.

I've been a Californian for 71 years. I know Kevin Starr very well but haven't read his histories. I am glad I started with this one since it sort of covers my life. The writing is excellent, informative and extensive.

This is for the Audible producers: PLEASE do some research with local citizens to find out how names are pronounced!!! I can't emphasize this enough as this is not the first Audible book I've listened to names of people and places were slaughtered. Case in point: Herb Caen. He was adored by millions in the Bay Area. People turned to Herb Caen in the Chronicle first thing because he was delightfully brilliant. His name is pronounced Herb Kane (like Citizen Kane). The reader pronounced it Herb CAN, like a hundred times. And everytime he mispronounced it I got a jab in the gut. Disrepectful to the reader and to locals. CALL UP A REFERENCE LIBRARIAN IN SAN FRANCISCO and check the pronunciation first. It won't take long. "Is it DuBOHCE Triangle or Dubosey?"

Please record the rest of this series!

This was a fascinating, expansive book on 1950s California that has something for every type of historical interest: cultural, political, environmental, legal, etc. At times almost too detailed but incredibly informative and engaging. Mostly focuses on Los Angeles and San Francisco. Though it’s centered on the 1950s it touches on many other themes and larger national questions in the first half of the 20th century.

I would LOVE to hear the rest of Kevin Starr’s California Dreams series on audible. They are so interesting and still so relevant but far too dense for me to finish in hard copy.

This reader used voices when reading from quoted sources and it was cringe-inducing at best (Richard Nixon impersonation) and offensive at worst (accents describable as racial caricature). Definitely totally distracting and awful.

I love all of the Kevin Starr California History series, I am hoping that more of them will make it into audiobook format, I have most of them in Soft Cover but reading through them more than once is a chore as in depth as they are.
a series like this is perfect for Audible.

Another Great Volunteer of the "California Dream"

Kevin Starr once again gives us a far ranging history of a significant period in California's history, 1950-63.

The narrator was very good but he should stay away from imitating accents. His attempt at sounding like President Kennedy was especially atrocious.