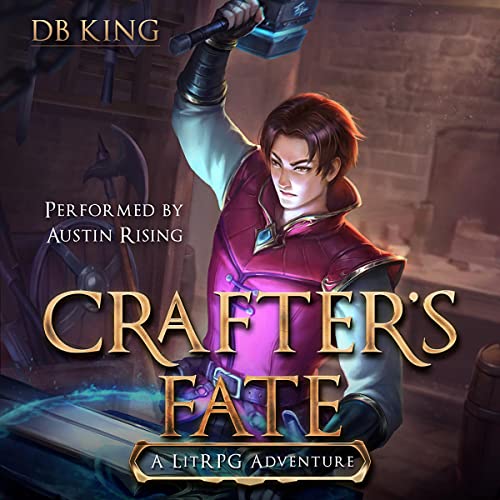 Those granted fates from the gods can become so much more than human…they are the fated.

Alastair is one such fated. Gifted with the crafter class after his village is decimated, he can now create priceless enchanted gear.

Damon is another fated: the hunter. With the items crafted by Alastair, Damon’s martial prowess is second to none. And the hunter class provides the perfect balance to the crafter.

Together, the pair set out into the world, hunting monsters and gathering rare materials to craft the greatest items the world has ever seen.

What listeners say about Crafter's Fate

The cliché of the overpowered

A cliché storyline but still very entertaining. Heaps of action but could use some more work on the world building and the logic behind the inner workings of the world. Character development needs some work but have some likable characters overall. I do still recommend to those interested in a fantasy world full of magic and monsters.

Amazing book! really enjoyed it. Crafting books all always fun. the Arefacts were interesting and unique. The story is progressing really well and I can't wait to check out more of these.

this story is for people who like crafter books. This series is super good. I feel like the romance was kinda dumb but other than that this story is golden. I really like the narrator and the abilities of this book. I didn't like how he got no more basic abilities in this book, I know he has to max out the ones he has but really? also why did he not make physical enhancement artifacts? it would've been helpful. The side characters are really likable with the Mc not being dumb and just letting himself be talked down to. There's alot of fighting in this book which makes it awesome. The way the Mc can make weapons and his best friend can just plow down enemies for some easy xp is just too cool. The experiments and going through the ins and out through the system were really nice, everything was explained and easy to understand. If you are looking at this book you need to get it.

If you want to listen to two arrogant men run around and do the impossible with no effort involved and fall deeply in love with a complete stranger all the whole claiming to have great morals that do not dictate their actions in any way this is the one for you.

This book had me thinking it was missing something. After the first chapter I was glad I was wrong. Very good read in my opinion.

Story
I very much enjoyed the plot on this one, being based of crafting LITRPG did get me excited. The story was written with a good deal of humor and some intrigue, I had some good laughs with the banter from the MC and his friend. Solid book!

Audible performance
Mr. Rising did a great job performing this book, kept a good flow and kept it away from being dry.
His performance with character voices was done nicely as well, I was able to know who was talking throughout the story.

I'm very much looking forward to reading/listening to more of this, as well as get into more of his books

Really good book. it took me a minute to get into (about 3 chapters) but after the first hour I found it is a fun read and I'm looking forward to book 2.

I was enjoying the book

So I purchased this audiobook not knowing what to expect other than knowing what the title was and I'm glad I got it. The beginning was a little slow for my liking but it picks up after a couple of chapters. After the first couple of chapters the story gets puts in full gear and then it just becomes almost impossible to put down. That's how interested I was in the audiobook. I love all the details that were put in the story including the puns. So kudos, to the author & narrator for all the amazing work they've done for Crafter's Fate and look forward to another Crafter's Fate in the future.

And regarding the people leaving the 1-3 star reviews, not everyone is going to like it cause that's not their cup of tea per say but as for me it was quite enjoyable so keep up the amazing work you do.