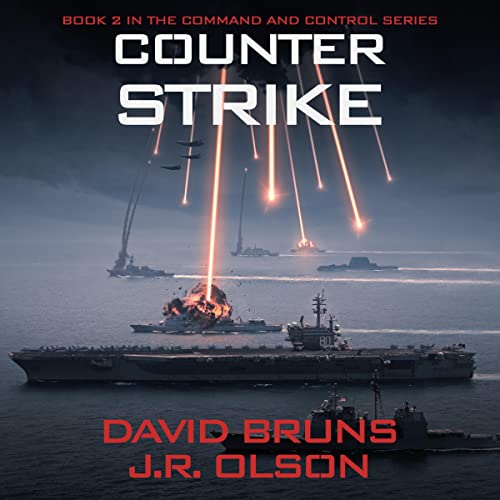 When China launches a blitz attack on the island of Taiwan, the world order hangs in the balance, and the CIA must mobilize all forces to prevent the start of World War III.

The operation by the People’s Liberation Army is airtight, with a high-tech battle network that guarantees total occupation within 10 days. The United States rallies every available asset on land, sea, and air to launch a desperate counterstrike against the occupying forces.

But in order to win, the US is forced to throw out the old playbook. What is required here is speed, audacity, and the application of the most advanced technology in the US arsenal.

As the head of the CIA’s Emerging Threats Group, Don Riley has seen his share of crises, but nothing has prepared him for the choices ahead. With millions of civilian lives at risk, the US must neutralize the Chinese threat without triggering World War III.

What listeners say about Counter Strike

After the climactic ending in book one, book two starts off with just enough time to catch ones breath. I loved the all the technical military chat and even the development weaponry. I finished this book in 2.5 days, I just could not put it down.
I hope book 3 is going to be action packed too.
pity all Taiwan and Chinaese spoke perfect English.
Otherwise great book.

I very much enjoyed listening to this story, the buildup was very believable and I liked the characters and the use of technology. it was all very well done. The only place in which these books struggle are the battles themselves. The Naval battles are fine in my opinion, they are over in a few pages but i dont really have a problem with it. But the land battles are, to be honest, poorly done and unsatisfying, with the ending left up to a technological miracle instead of letting the long awaited american forces actually fight it out with the Chinese. It was very unsatisfying. Also, the author never really depicts the Tiawanise military other than to say, things like, "they wont last much longer." Overall, despite its shortcomings, it is still a very good story and i highly recomend it.

A military techno thriller of the 21st century by address, and very readable

A very interesting and enjoyable listen from two authors, who know their subject will. It is the right combination of suspense and interest that kept me rooted. Do this book until the very end. Good work!

its a sit in the work parking lot to listen to another chapter and screw it if I'm late kind of book.

This the second audiobook in the series that I have “read”. I enjoyed enjoyed it, but the sub-plot involving Chinese officer’s effort to retrieve his tablet occupied way too much time. At least an hour.

I used to be hooked on the espionage genre, not so hot on submarines, but this, and another series have changed my mind.

Multiple story lines, like Clancy. AND they finished up telling what happens to the characters after its all over. So many stories have been skipping that, cutting it off as soon as the actions finished. Wha wha what? Thanks to these authors that did not skimp on the story!

loved it, going to continue the series. Kept trying to find time to listen to it. makes you stop and think, could this hapoen?

I never had read any of this series. Truly fantastic much like Dale Brown’s stories. Great job.

Great story which reminds us all that communist governments are pure evil and cannot be trusted. And the only good communist is a dead communist.

counter strike in the seas and on land