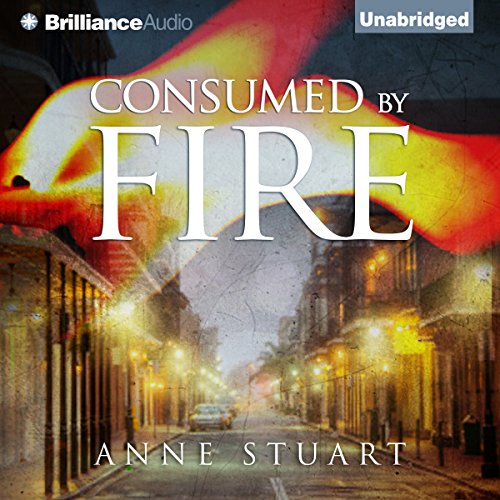 By: Anne Stuart
Narrated by: Jill Redfield
Try for £0.00

Evangeline Morrissey remembers the last time she saw her husband: it was during their honeymoon, right before he stole her grandmother's earrings and abandoned her. Now, five years later, the enigmatic man who'd broken her heart and destroyed her trust is back. But she's not the same naive young woman who fell for him so easily.

Marrying Evangeline and letting her think he was nothing but a common thief had been James Bishop's plan all along. As an assassin for the Committee, a covert agency dedicated to stamping out international crime, he had no business even thinking about marriage. But it was the only way to protect Evangeline after she'd unwittingly wandered into his operation against a group of human traffickers, placing herself in grave danger. And now that James's vigilant watch over Evangeline's life has revealed to his enemies that she's his one true weakness, he must set out to have, to hold, and - above all - to protect his bride.

What listeners say about Consumed by Fire

The characters, action packed story line,humour, sarcasm and sex were believable. Along with the violence and emotional moments . Anne Stuart, l simply must read more of your novels ASAP😉

Nobody writes romantic suspense like Anne Stuart! The Fire series starts off on a high note with Consumed by Fire, a dark and complex romance with a dangerous hero and a smart, scarred heroine. James and Evangeline’s story is rich, compelling, and has an edge to it – exactly what I’ve come to love and expect from Ms. Stuart.

The Fire series is a spin-off of the Ms. Stuart’s Ice series, the premise being an American branch of the infamous Committee is being set up. Like his Ice counterparts, James is a truly deadly hero who won’t ever be a sappy romantic. He’s an alpha male with none of the posturing and he’ll break his own heart by hurting Evangeline if it’s for the greater good. In the hands of a lesser author, James would be a terrible hero, but somehow Ms. Stuart makes him wildly compelling. Like Evangeline, I was drawn to him, even though he’s someone I’d never want to cross paths with, were he real. As for Evangeline, she’s a strong, capable woman who was nearly broken by James in the past. Though she comes to understand his reasons, that doesn’t mean she’ll welcome him back into her life with open arms. Their relationship is tumultuous, with passion, hatred, and love all blending together. Their love story isn’t pretty, it isn’t sweet, but damn if it isn’t sexy, emotional, and impossible to put down.

There’s plenty of action in Consumed by Fire outside of the romance as well. Someone is targeting Evangeline and the reasons why go back to when she and James first met. I can’t say more without spoiling the story, so suffice it to say that very real danger lurks around every corner. Ms. Stuart doesn’t pull her punches and if Consumed by Fire is any indication, the Fire series will be as wildly, wickedly entertaining as the Ice series (though you don’t have to have read the first series in order to follow along). Evangeline and James do not disappoint and I can’t wait to see what happens next for the Committee’s newest batch of operatives.

Jill Redfield was fantastic with delivery of the story.

Consumed by Fire is Anne Stuart at her very best. Stuart's Ice Series of 6 books and one novella introduced the reader to the men and women of the covert, anti-terrorist organization "The Committee". Each principal male character is an anti-hero, some sarcastic, others brooding, but each was witty, engaging and lethal. The female characters were intelligent and ultimately strong and self-reliant. The strength of both main characters in the Ice Series of books is what made them so memorable. Consumed by Fire is the first book in the Fire Series - an off shoot of the Ice Series, and Ms. Stuart's history of strong male and female characters continues.

While on a job in Italy, James Bishop, a Committee operative, meets Evangeline Morrisey, an academic who has a predilection for studying obscure topics of architectural history. (Who knew you could take a class on the architectural history of North American camping lodges). After their initial meeting, the story then moves to several years later when the two meet again. James is a classic Anne Stuart anti-hero, you know he has a good heart; it will just take a long time to be revealed. Events in Italy changed Evangeline from a quiet academic to a self-reliant woman with trust issues trying to forget past events, with little success. James and Evangeline meet and a memorable road trip follows. The conversations and chemistry between James and Evangeline, together with a German Shepard named Merlin, a vehicle named Annabelle, references to prior characters and the introduction of others, that will hopefully be the subject of future books, ensures that Consumed by Fire continues in the tradition of the Ice Series, well written, strong characters who have complicated relationships with blunt dialogue amid the intrigue of romantic suspense and a lot of heat.

You don't need to read any of the Ice books to enjoy this new series, but once you read this book, I suspect you will want to.

Anne Stuart is addictive. If you have read one, then you know what to expect for the others but this is a good thing. Dependable edgy romance between characters who are usually old enough to be past the 20 something angst that is so popular in current romantic fiction. My only complaint would be that as much as I like Jill Redfield as a narrator, she made the characters in this novel sound exactly like the characters in all of the Susanne Wright novels that she also narrates. I found that to be a distraction.

What made the experience of listening to Consumed by Fire the most enjoyable?

Jill Redfield is a one of my favorite narrators. She is equally skilled at male and female voices and is great at convaying the vocal nuances required to truly bring a story to life.

Original story line that kept my interest from beginning to end.

I hope the author continues to use Jill Redfield for this new series.

What would have made Consumed by Fire better?

Would you ever listen to anything by Anne Stuart again?

What does Jill Redfield bring to the story that you wouldn’t experience if you just read the book?

The narrator was excellent, easy to understand and brought life to the book. I would definitely listen to her again, but not in an Anne Stuart book.

What character would you cut from Consumed by Fire?

Don't waste your credit on this one.

I LOVE THE NARRATOR JILL REDFIELD. SHE IS AMAZING! please have her read more books. she really gets into it

Anne Stuart is the master at writing this genre, she is a absolute genius when it comes to anti-hero's!!!!

This is book one in her "Fire" series, a spin-off of her "Ice Series", The Committee has expanded their operations to the United States and Bishop (the hero) is in charge of getting the new Community U.S. Branch up and running.

Five years earlier Bishop married Evangeline "Angel" after a whirlwind courtship...she doesn't know that he married her after she sees something she shouldn't have and to protect her from being assassinated by The Committee he decides to marry her. After three days of wedded bliss for Evangeline, he disappears without a trace with a cherished and expensive memento her grandmother left her, she was crushed that she was taken in by a con man and common thief.

Now five years later and unbeknownst to her, her life is in danger from Bishop's enemies who learn of her existence from someone within "The Committee", someone holding a grudge against both of them, they know he has a soft spot for her, they target Evangeline to make him vulnerable which forces them back together and on the run from his enemies much to Evangeline's dismay.

The plot was fast paced, intense at times, and very exciting, the bad guy's are bad but Bishop is even BADDER. I absolutely love AS's anti-hero's, as I've said in the past, her hero's are definitely a guilty pleasure!!!! (less)

Loved the story. Lots of action and good narration. I'm not a prude, but the author did drop the f bomb more than needed, but I stayed up until 3am to finish the story!

Would you consider the audio edition of Consumed by Fire to be better than the print version?

This is way better than the print version. This narrator has one of the best male voices I've ever heard!

Have you listened to any of Jill Redfield’s other performances before? How does this one compare?

I'm going to look her up and fine more books read by her. She's wonderful with the male and female voices!

No! I wanted to prolong it!! I didn't want it to end. I never listen or read books over again but I'm going to with this one!