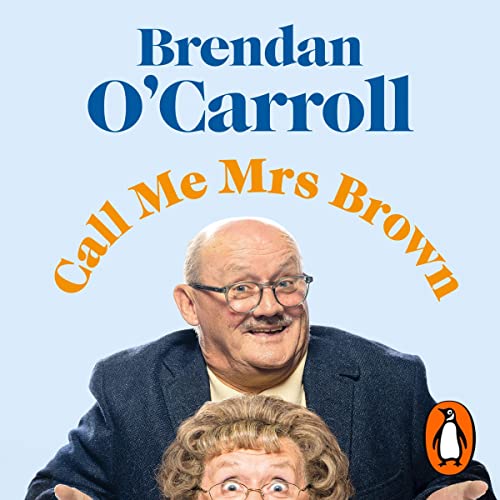 Before he became the nation's favourite Mammy, Brendan O'Carroll was known, simply as Brendan. He's the youngest of eleven children from a poor family in Dublin, he's a boy whose father died when he was just nine years old; he's someone whose hope and determination meant he never gave up. Throughout the tough moments, Brendan always had humour and a good story to tell alongside the ever-guiding inspiration of his own Mammy, a formidable figure who became Ireland's first female Labour MP, all whilst raising eleven children by herself.

Just like the show so brilliantly expresses, Brendan's first autobiography, the real story behind the man who became Mrs Brown, combines uplifting heart, warmth and hilarity.

What listeners say about Call Me Mrs. Brown

Good book so it is

Good wee book liked it quite a bit, brendan is a cool fella god bless him

Just what you'd hope for

Very well written and read by author. Real and honest, not self inflating or deprecating, rings true to life

Nice insight and not all about ‘Mrs Brown’

Great to hear Brendan’s backstory. Life doesn’t/didn’t all revolve around Mrs Brown. So much more to this man and family.

Lots of hard work to get to success. Funny and sad story. Not disappointing.

Brendan is an outstanding talent. Narrating his own book was a smart move. The O'Carroll family sounds like supportive and loving family.

Really a heeled elephant book , lot of holes and real mad me see the real Brendan not a good book.!

Brendan has worked his backside off to get where he is and after adisappointment after disappointment he has had the positive mental attitude to forge ahead when most would give up. This book is fantastic uplifting and inspirational. Highly recommended

Brilliant funny and tears too!

Wonderful story. I love that he narrated it! Another one please! Thank you for this

Brendan O’Carroll is one heck of a storyteller!

If you’re looking for something on the brighter side of life then this book has it. Mr. O’Carroll’s storytelling is amazing. He’s the Robin Williams (without the debilitating depression) of Ireland!

I am blessed to know Brendan OCarroll, and his lovely wife, Jenny. This book took my appreciation for them to a whole new level. It is real, candid, compelling, and incredibly funny. A wonderful story with great narrative, like sitting in a room having coffee with a brilliant and humble human who has gifted us with his humor. Thank you Brendan for being authentic, genuinely kind, and very funny!

Definitely worth the wait.

It's been a long time coming but was definitely well worth the wait. I can't wait Mammy's next book.

“Couldn’t put it down” so to speak. Great book! Great Storyteller! Been eating for this book forever.