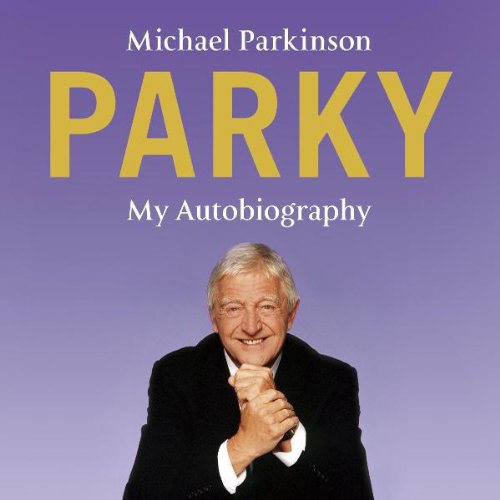 From prize-winning journalist to chat show king on a show voted one of the top 10 British TV programmes of all time, Michael Parkinson's starry career spans over four decades.

Now an international celebrity himself, the man from a humble but colourful Yorkshire mining family who can tease out the secrets of even the most reticent star guest, at last reveals his own story, with the easy manner and insight that has kept his audiences fascinated.

His distinguished career has involved working on highly acclaimed current affairs and film programmes. His wide interests and expertise include jazz, film, football, and cricket.

Witty, humorous and blessed with exceptional intellectual clarity, Michael Parkinson's memoir is a joy to hear.

What listeners say about Parky

A constant from my childhood and beyond. Wonderful listen.

I remember being allowed to stay up to watch Parkinson and seeing him talk to film stars as real people. Parkinson just continued as a beloved institution through so many years. Always entertaining, so clever at drawing people out. I loved hearing about his path to that position and beyond. Especially as I got to spend time with him all over again. A lovely rich voice to laugh along with. Very special. Thank you Audible.

was really looking forward to this but was very disappointed. never realized just how boring Michale Parkinson's voice is !

A dose of nostalgia

I love Michael’s voice, and his story is fascinating and honest a good listen, with some laughs

Loved it. The legend Parky in his own word. A life well lived and told brilliantly.

loved it , great story of his life and his career before his famous tv career

Parky is and was and will always be a national treasure in the UK. One of those who have a rich voice you can listen to all day. A fabulous story told in Parkys usual ‘to the point’ stylee not wasting a single word to get to the point. I knew this would be a great book and the only shame is that is was so short…I’m sure he could have doubled the time if not trebled it and it would be no less enjoyable but Mikes an old style Yorkshire man and that’s how’s it’s done. Imagine you’re alone on a long train journey and this book would comfortably be your best companion to while away the hours. Brilliant.

Always was a fan of Parky's interviewing style, grown up watching him. He is one of those talkers you never tire of listening to. This book was just what I was hoping for. Was interested to find out about how much he has done in life. Before being on TV and after. Just wished it was longer, but only as I was really enjoying it.

Parky at his best!

If you like Michael Parkinson then you will love Parky! My 3rd straight through listen and I'm still picking bits up from anecdotes that I missed. Brutally honest about himself, his career and his guests. All delivered in that trademark Yorkshire accent.

A great listen and enjoyable journey.
Let's hope There's a sequel or a part two.

simply excellent! the next best thing, to meeting the man.
A real pleasure. listening again

Have often seen Parkinson show on TV. Lovely to listen to the man himself telling his story.

The Extraordinary Life of an Ordinary Man

Breezy autobiography of the most famous interviewer in the English-speaking world, related with Parky's signature folksy candor and wit. Not to be missed.

Would you listen to Parky again? Why?

Would listen again to pick up what I missed on the first pass.

What was one of the most memorable moments of Parky?

Would you be willing to try another one of Michael Parkinson’s performances?

Not unless someone else narrates

Slow down and smell the roses