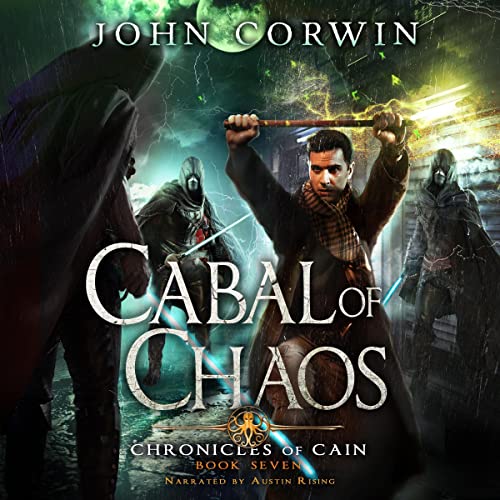 The Oblivion Guard is trying to kill Cain.

That should be impossible. After all, Cain has a bargain with the summer and winter queens that keeps him safe from them directly or indirectly harming him. If they breach the bargain, then they'll lose considerable power.

Cain discovers that many of these would-be assassins come from Alpha and Beta dimensions, and they seem to have found a loophole that allows them to kill him without harming the queens. Anyone associated with Cain is fair game, and Aura and Layla are forced to hide out at Sanctuary with Cain.

But not even his secret hideout is safe anymore. The guardians are working closely with Eclipse, the assassination and bounty-hunting agency once run by Torvin Rayne. A cybermancer in their employ has found a way to triangulate the location of Sanctuary. The clock is ticking down, leaving Cain no choice but to go on the offensive.

But he soon discovers that rogue guardians are the least of his worries. There's a new player in town, a being known as the Winged God. And they seem to be pulling the strings. Their goal is to kill Cain and take Hannah for their own.

There's only one way to stop the threat, and that's to go straight to the source of the problem and kill everyone. But going up against an army of trained killers isn't a walk in the park even for Cain. He'll have to use every trick in the book to pull this off and make up a few along the way.
But soon they'll learn that no one, not even a god, is going to get between Cain and his mangoritas.

What listeners say about Cabal of Chaos