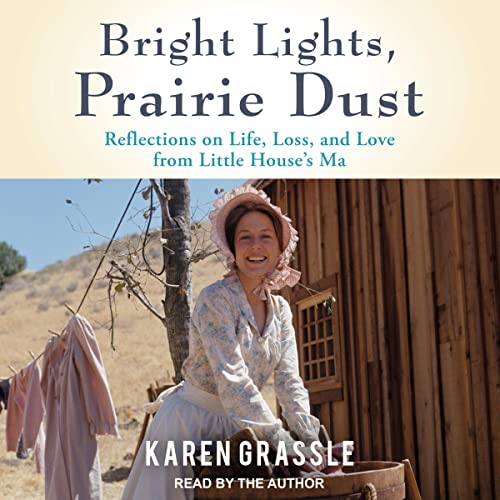 Karen Grassle, the beloved actress who played Ma on Little House on the Prairie, grew up at the edge of the Pacific Ocean in a family where love was plentiful but alcohol wreaked havoc.

In this candid memoir, Grassle reveals her journey to succeed as an actress even as she struggles to overcome depression, combat her own dependence on alcohol, and find true love. With humor and hard-won wisdom, Grassle takes listeners on an inspiring journey through the political turmoil on '60s campuses, on to studies with some of the most celebrated artists at the famed London Academy of Music and Dramatic Arts, and ultimately behind the curtains of Broadway stages and storied Hollywood sets. In these chapters, listeners meet actors and directors who have captivated us on screen and stage as they fall in love, betray and befriend, and don costumes only to reveal themselves.

We know Karen Grassle best as the proud prairie woman Caroline Ingalls, with her quiet strength and devotion to family, but this memoir introduces listeners to the complex, funny, rebellious, and soulful woman who, in addition to being the force behind those many strong women she played, fought passionately - as a writer, producer, and activist - on behalf of equal rights for women. Raw, emotional, and tender, Bright Lights celebrates and honors womanhood, in all its complexity.

I really enjoyed her autobiography. Her career is fascinating. I respect the hard work and dedication she has put into each role. Her honesty concerning the difficulties she endured while on Little House on the Prairie and her relationship with Michael Landon may upset some fans of the show but she also speaks of how much her co-star was very good at producing a successful tv series and that she is grateful for the role she had for eight years.

A real eye opener couldnt stop listening to it. a real insigjt into each character on the series.

There's something really odd and off about the way Grassle tells her story. It almost seems that she's been directed by a therapist to get it all off her chest. Her manner of speaking is disturbing and annoying and I really didn't want to delve any farther into this book than I did; I stopped about a third of the way through. Good luck to any readers who make a better attempt than I did.

Pros/Cons with some spoilers

Pros
-Loved listening to her beautiful soothing and calming voice.
- Well written and interesting format
- Honest, transparent and vulnerable
- her childhood trauma, struggle with sobriety and life lessons were vividly depicted and honest

Cons
- A lot of time spent explaining life story. Overall interesting but wish more time spent experiences filming LHOTP.
- *Spoiler* I didn’t really like the political innuendo about abortion and was sickened hearing about abortions as I am someone that believes life begins at conception. I felt like she rightly defended and made a platform of defending woman’s rights but she neglects to understand that unborn have rights too. Moreover, it seemed the abortions were a result inconvenient timing which saddens me.
- I also wish she would have talked more about her faith. She discusses walking away from God at the beginning of the book and alludes she comes back to acknowledging him at the end. Wish there was more conclusion to her faith journey.

Overall - captivating and insightful look at her life story. Interesting throughout and a relaxing listen as her voice is so soothing and calming. Detailed, thoughtful and reflective, one of the better memoirs out there!

I hated this book. Why the decent review? Because it’s the truth, and sometimes the truth is hideous. Why this book mentions “Prairie Dust”, Laura Ingalls Wilder quotes throughout, and a picture of Grassle on the cover as “Ma”, is a complete mystery to me. There were no fun stories, no tidbits about any of the cast, and all we know is that Grassle was a slutty lush who (rightfully so) disliked “Pa” (an egotistical, sexist pig) so much that there wasn’t a kind word mentioned. Her dislike of the show and “Ma” is palpable and disappointing. I’m so damn sad. Some stories should not be shared.

not what I expected.

Thought it was going to be more about the little house series and experiences. Only the last few chapters talked about it. More of a life story of Karen and her career. Disappointed, fell short of expectations.

This woman is OUT THERE! It’s amazing that she could hold herself together long enough to film this many seasons of a TV show. The book chronicles; her sleazy sex life, her entitled attitude about sponging off of her parents for years and years and years (all while criticizing their work ethics and old fashioned values), her non-stop overly-dramatic meltdowns, her lying, her cheating, her misguided sense of importance relating to her character on LHOTP, and her unbelievable adherence to 1960’s/1970’s mysticism.
If you are interested in this type of thing- I would recommend Reflexion- by Squeaky Fromme. At least Squeaky appears to realize that a lot of the belief systems from the late 60s and early 70s were ridiculous!
Ma was one of the weakest characters on LHOTP. Karen, with the benefit of years of hindsight- still can’t see that. She attributes her lower salary to gender inequality- NOT lackluster acting.
She hops into bed with half the men she meets but goes out of her way to say that some of them are Jewish. I couldn’t figure out why. She never mentions the religious faith of the other exchange students, stage hands, taxi drivers, neighbors, pedestrians, dog walkers, and complete strangers she warms the sheets with….. It was perplexing until she starts calling Michael Landon cheap. This was her pathetic attempt at giving herself coverage from the woke community. She can’t hate Jews- she is sleeping with some! She apparently hates no one because she is sleeping with just about everyone.
I usually like audiobooks read by the author. But this should have been read by someone else. The syrupy sweet grandma voice was annoying- and made her even more unlikeable (if that is even possible).

Not enough, but fantastic!

I loved the openness of Karen and longed for more stories from her 8 seasons on the show. This was such an eye opening book that shows that people are not the same as the characters they play on TV. Thank you Karen. I hope to hear more from you!

Thank you Karen Grassle for your life story! Thank you for your transparency. It’s so wonderful to know of all the transitions in your life and to know of the changes in women’s lives due to your passions!
I’m writing this like she will read it! You will love this book, it’s amazing how her telling of her life makes the reader pensive about their own life.

Wonderful book — making the days and years and the actions of my time alive again. So impressed at the strength and courage and commitment to be the best. Beautifully done. Thank you Karen. Inspirational.

This book was gifted by one of my kids for Mother’s Day. Yikes. Well-meaning, since they know of my love for Little House. Simply put, it was a tough book to get through, because now I know too much. Karen Grassle obviously went through so much in her life; much, however, was self-induced/bad choices in addition to mental health struggles. Perhaps sometimes it’s better to write everything down and then have a ceremonial burning of the journals. To Karen Grassle’s credit, knowing what she endured, she’s an incredibly talented actress to have pulled off the role of Ma so beautifully.

Don't buy if you want this to be all about LHOTP

You will be disappointed. If, like me, you want to know about the author, it's a good read. There are plenty of places to learn about the show, books, the real people they're based on, etc. But you can only get a good grasp on the actors and what made them who they are, from their own words. The show may have been a huge and transformative part of her life, but there's so much more to her than that. Give it a shot. 😊