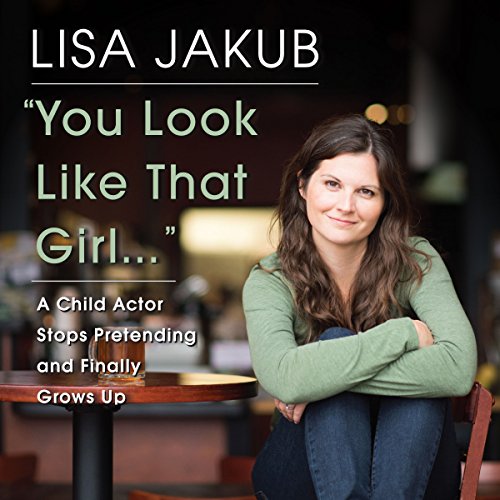 At the age of 22, Lisa Jakub had what she was supposed to want: She was a working actor in Los Angeles. She had more than 40 movies and TV shows to her name. She had been in blockbusters like Mrs. Doubtfire and Independence Day. She walked the red carpet and lived in the house she had bought when she was 15.

But something was missing. Passion. Purpose. Happiness.

Lisa had been working since the age of four, after a man approached her parents at a farmer's market and asked her to audition for a commercial. That chance encounter dictated the next 18 years of her unusual - and frequently awkward - life. She met Princess Diana...and almost fell on her while attempting to curtsy. She filmed in exciting locations...and her high school asked her not to come back. She went to fancy parties...and got kind of kidnapped that one time. Success was complicated.

Making movies, traveling the world, and meeting intriguing people was fun for a while, but Lisa eventually realized she was living a life based on momentum and definitions of success that were not her own. She battled severe anxiety and panic attacks while feeling like she was living someone else's dream. Not wanting to become a child actor stereotype, Lisa retired from acting and left LA in search of a path that felt more authentic to her.

In this funny and insightful book, Lisa chronicles the adventures of growing up in the film industry and her difficult decision to leave behind the only life she had ever known, to examine her priorities and to write the script for her own life. She explores the universal question we all ask ourselves: what do I want to be when I grow up?

What listeners say about You Look Like That Girl

thank you Lisa for your raw honesty. very liberating, moving, and genuine. thank you x

For many of us, our knowledge of Lisa Jakub ended after she decided to leave her film career in LA. This audiobook autobiography perfectly captures the journey of rediscovery that Lisa has undertaken since then. For readers of her blog, social networks and vlogs, having her read her own words in such a candid and personal way is a joy which will move you to tears, laughter and audible gasps! It did me! I thoroughly recommend the book and audiobook.

A stunning recollection of being 'that girl'

Some memoirs have the feel that they've been sanitized for the most generic of audiences. Not Lisa. Hers is a book that is a tell-all without scandal. A fond yet cautionary tale about showbiz. A loving recollection of who have her the best advice, the greatest stories, and the tricks she learned to navigate showbiz all while keeping a candor with the audience that engages them instead of detracting from the overall theme. Her diction is fluid and her memory is spectacular to behold. The way she started, had a career, and then left it all is a tale that will leave you uplifted as much as it makes you mad about those who wronged her. There is a great tale about her time on Mrs. Doubtfire and Robin Williams went to bat for her. There's also the glorious tale about how she created an artist commune in the San Bernardino valley. But do yourselves a favor and check this out. You'll be glad you did.

Author opens up about life and living.

I've listened to the audio book two or three times now, and it's just as captivating each time. She tells her story clearly enough and thoroughly so that you feel her pain, anxiety, joy, cheers, and everything in between.

No Doubt-fire about it, this was a great book.

Very easy to listen to. Lisa writes well and speaks well. It was interesting to hear her story about her life, how acting affected her, and how her life is now, along with some humor.

A decent story of someone forced into acting as a child, just not worth an entire book.

Parts of this story were good, however it was clearly dragged out into enough words to get a book deal, or edited to omit some really eye opening parts. I appreciate her honesty and willingness to say she did not want to be a long-term actress. I feel like the point was rehashed over and over, and it came off as being bitter about the life she was blessed with. I wanted to recommend this book to a friend, but there is nothing in it to give it enough substance unless you were a fan of hers to begin with. I had no idea who she was.

Enjoyed this very much

Lisa is an excellent writer who is also an excellent audio book reader. Her life story is very interesting and frankly gave me a look into how I view "celebrities". Her spplicstion of humor is very well done and makes the book quite engaging. It is a look into apart of life that many of us will never know and Lisa gives a personal look into the beauty of an "ordinary" life. Well done.

This book as excellent. Honest, interesting, and inspirational. Infused with humor and humility; Lisa Jakub is a wonderful writer. I can't wait for more books by this author.

About a girl who was really good at something she didn't want to do. I was impressed with how well in touch she was with her feelings and weaknesses. She fought them for a while and tried to change, but finally realized who she was and moved on. Congratulations.