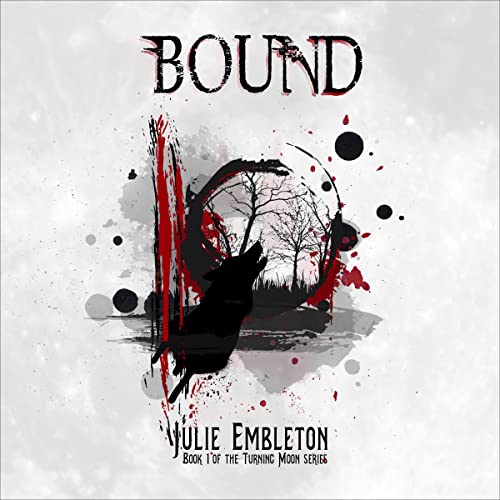 By: Julie Embleton
Narrated by: Elyse Osterhaug
Try for £0.00

Would you sacrifice love to stay alive?

Nyah’s wolf has been bound by dark magic. Defenseless and terrified, she finds sanctuary on the run, but choosing to live demands an impossible price.

The new Alpha of Nyah Morgan’s pack has aligned with dark forces, and his plans for Nyah break the most absolute of Lycan Laws. Maimed by his magic, she turns rogue, her incapacity landing her in unfamiliar Lycan territory, where she catches the unwanted attention of Dean Carson, an Alpha determined to learn the truth she hides. With her crazed Alpha closing in and the safety of another pack at stake, Nyah is forced into making a choice. Her bound wolf is killing her, and both Alphas can save her, but which one, and at what cost?

Bound is book one of the Turning Moon series, where friendship and love are both tested and discovered as supernatural beings join forces.

What listeners say about Bound

Excellent narration for a fantastic book!

This was my first werewolf-y story, and at no point did it feel overwhelming or weird. Everything is explained naturally and extremely well as it draws you into the world.

It's brilliantly written. Detailed and descriptive, but not overly wordy with great dialogue. You're kept in the action the whole way through, and it manages to keep you guessing too. I found myself predicting what was going to happen and being wrong most of the time, which is great.

An excellent start to a series, and the narrator is really good!

A well-rounded thriller and gripping adventure.

BOUND by Julie Embleton is the first book in the Turning Moon series. I read the kindle, and then when the audiobook version narrated by Elyse Osterhaug was released, I had great joy listening too.

While grieving the loss of her father, Alpha Morgan, the feisty heroine Nyah is drawn into a cat 'n' mouse game of survival from an unwanted intrusion; a wolf who has aligned himself with evil forces and threatens the existence of their wolfpack.

Firstly, I have to say that this was far removed from my normal genre; I don't usually read werewolf fiction. But let me tell you... A brilliant, well-written story with great characters stands firm no matter what genre. I think I went into this thinking it would be fuelled by romance, and whilst there is romance, BOUND is far more a well-rounded thriller and gripping adventure. I loved it.

I read and then listened to this as if watching it on the big screen. The scenes were vivid, with great dialogue from believable characters, and the landscape is richly described to draw you into Nyah's story. Highly recommended.

She is the worst

The FMC is the most pathetic being. The entire story she is helpless and selfish. She’s extremely childish and no likable so she’s hard to feel bad for.