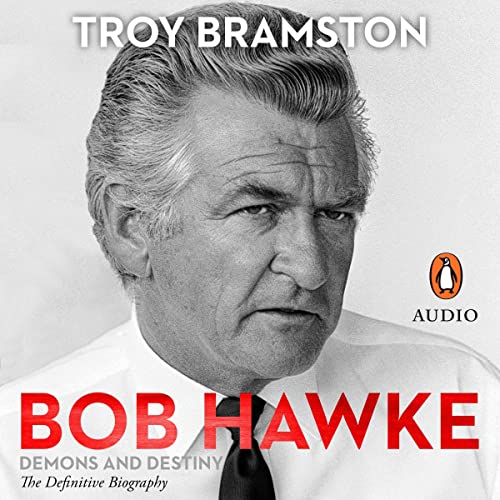 This unprecedented biography of Hawke includes an exclusive series of interviews with him - the last that he gave - as well as unfiltered access to his extensive trove of personal papers. It features new interviews with more than 100 people who knew and worked with Hawke, including his family and friends, political and union colleagues, and rivals; advisers and public servants, and journalists, along with international contemporaries of Hawke such as George H. W. Bush, John Major, Brian Mulroney, James Baker and George Shultz.

Troy Bramston, an award-winning and best-selling author, tells the remarkable story of Hawke's upbringing and education, the people and events that shaped him, his rise through the union movement, his complex personality and personal life marked by womanising and the demon drink, his nine-year government from 1983 to 1991, plus his post-prime ministerial life and legacy.

This book is about the real Hawke, chronicling the stunning triumphs and shocking failures, a life riddled with huge flaws and great virtues marked by redemption and reinvention, which changed Australia and shaped the world. Revelatory and compelling, it will shock and surprise those who think they know the story of the Australia's most popular prime minister.

What listeners say about Bob Hawke

I've always been intrigued by the legend and mystique of Bob Hawke. Bramston's account is enjoyable, well researched and a balanced account.

At times the personal side of Hawke and his flaws was repetitive (but probably necessary to underline). Overall it's a great insight into Australian society and politics during the 70s and 80s. I thoroughly enjoyed it.