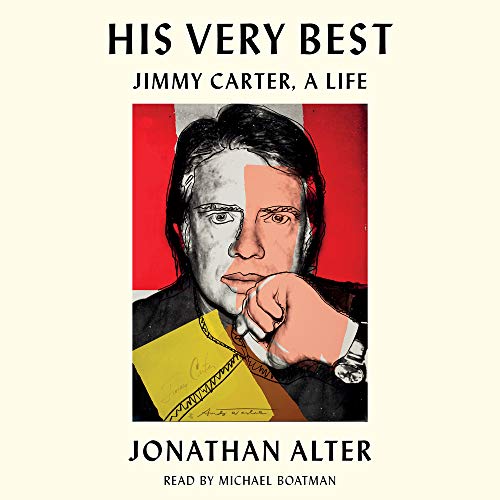 By: Jonathan Alter
Narrated by: Michael Boatman
Try for £0.00

From one of America’s most respected journalists and modern historians comes the highly acclaimed, “splendid” (The Washington Post) biography of Jimmy Carter, the 39th president of the United States and Nobel Prize-winning humanitarian.

Jonathan Alter tells the epic story of an enigmatic man of faith and his improbable journey from barefoot boy to global icon. Alter paints an intimate and surprising portrait of the only president since Thomas Jefferson who can fairly be called a Renaissance Man, a complex figure - ridiculed and later revered - with a piercing intelligence, prickly intensity, and biting wit beneath the patented smile. Here is a moral exemplar for our times, a flawed but underrated president of decency and vision who was committed to telling the truth to the American people.

Growing up in one of the meanest counties in the Jim Crow South, Carter is the only American president who essentially lived in three centuries: his early life on the farm in the 1920s without electricity or running water might as well have been in the nineteenth; his presidency put him at the center of major events in the twentieth; and his efforts on conflict resolution and global health set him on the cutting edge of the challenges of the 21st.

“One of the best in a celebrated genre of presidential biography,” (The Washington Post), His Very Best traces how Carter evolved from a timid, bookish child - raised mostly by a Black woman farmhand - into an ambitious naval nuclear engineer writing passionate, never-before-published love letters from sea to his wife and full partner, Rosalynn; a peanut farmer and civic leader whose guilt over staying silent during the civil rights movement and not confronting the white terrorism around him helped power his quest for racial justice at home and abroad; an obscure, born-again governor whose brilliant 1976 campaign demolished the racist wing of the Democratic Party and took him from zero percent to the presidency; a stubborn outsider who failed politically amid the bad economy of the 1970s and the seizure of American hostages in Iran but succeeded in engineering peace between Israel and Egypt, amassing a historic environmental record, moving the government from tokenism to diversity, setting a new global standard for human rights and normalizing relations with China among other unheralded and far-sighted achievements. After leaving office, Carter eradicated diseases, built houses for the poor, and taught Sunday school into his mid-nineties.

This “important, fair-minded, highly readable contribution” (The New York Times Book Review) will change our understanding of perhaps the most misunderstood president in American history.

What listeners say about His Very Best

Brilliant from start to finish

This is by far the best biography of Carter I've listened too. His entire life beginning in rural Georgia to the months before publication in 2020 is covered. The author makes a compelling argument that the 39th Presidents one term was far more consequential and successful than until recently people were willing or able to admit.

While Mr Alter is clearly sympathetic towards his subject he does not shy away from takling and criticizing Carter, notably for the way in which the 1970 campaign for the Georgia governorship is concerned, concerning the use of racial dog whistles and populist rhetoric surrounding the big business and inner city voters who were backing his main opponent former Governor Sanders and his courting of the segrationist voters of Lester Maddox.

All the major events in Carters unlikely term as President are covered from his walking at his inauguration to the camp david accords and the Iranian hostages. The narration is excellent and makes the book an easy an enjoyable listen. The long and continuing post presidency is also covered and is both the many excellent things he has done since leaving office and the less admirable recieve the proportionate attention.

Overall the life and Presidency of Jimmy Carter shows the importance of timing and quite simply luck both good and bad in the presidency. The listener should come away with a sense of the fundamental decency of Jimmy Carter, his deep religious faith and genuine commitment to doing what he thought was the right thing. And yet at times you are left shaking your head at his lack of political judgement and sheer pig headedness when dealing with other elected officals. Mr Alter has written a wonderful and compelling book which I would encourage people to listen too.

Unbiased biography of a complex president

Very illuminating biography of a complex, brilliant, and amazingly energetic man. Jimmy Carter certainly has always given “his very best”. Although Carter has flaws, and the author illuminates those flaws, this book points out the many accomplishments of his presidency, many which have been overlooked. For instance there has never been a president who has done more for the environment. and human rights. He has worked most of his life to make the world a better place. Unlike most presidents, he has admirably not enriched himself after his presidency and has worked tirelessly to make the world a better place. Definitely worth reading.

Looking fondly on the past as one's life approaches twilight is normal, but that doesn't render its perspectives incorrect. Such is the hindsight which shapes my reflections on the Carter presidency. After over 30 years of daily hammering on talk radio and single-purpose TV "news" channels, an entire generation of Americans born after President Carter left office will tell you Jimmy Carter was the worst president in our Nation's history. History will judge him far more kindly, and this book and others, recent and forthcoming, herald that reassessment. With the benefit of hindsight, I can see kicking Carter to the curb put us into the exit lane for the off-ramp from the positive course the United States was on. Yes, we had problems but at least we were working on them and making process, and at least we cared about each other. That off-ramp put us on a boulevard of broken dreams, where we are stuck gaping at the trappings and distractions of our consumerist, me-first society, wishing we could find a way to turn around and find an on-ramp to put us back on course. Realizing the course, however imperfect, was better than the course we're on is a positive first step, and this valuable biography can help.

After a general prologue covering Jimmy Carter's career highlights, the book began with Carter's childhood in rural Georgia. The book grabbed a hold of me then, and never let go. Carter's life is fascinating, and this book brought alive the man and the political leader. His unexpected rise to power in Georgia and the country is fascinating. His post-presidency was as interesting as his any part of this book. This book is so well written, and covered Carter's strengths and weaknesses. I put this book up there along with classic presidential memoirs like McCullough's Truman and John Adams. This is history at its most readable. In addition, the narrator was outstanding. This book was more than 30 hours, and I was not bored for a second. While Carter had his political bumps, he is an inspiring human being. If you like history, you should read or listen to the book! I have rated hundred of books, and to me, this is one of my rare 5 star ratings.

If you are looking for an evenhanded treatment of Carter, keep looking. The book is very interesting and comprehensive. It is well worth the read. But, the author is guilty of biased interpretation of events, bending over backwards — sometimes way over backwards — to construct things in Carter’s favor. Listening reminded me of the reasons I did not like Carter and of the reasons I came to admire him.

I admire Jimmy Carter for his character and determination. What is difficult to handle about this book is the persistent and consistent liberal bias the author brings to the story. I have read or listened to 24 presidential biographies and this is without a doubt the most politically biased one. I suppose because this is recently written it may become the new normal but that is disappointing to me. The reason I didn’t give it a lower score is because the author does write an interesting story that is easy to stay with.

Ineffective, I think not.

Turns out, he wasn’t an ineffective president, but was a peace-monger (he is the only POTUS who’s presidency included NO wars, NO military attacks, & NO occupations), environmentally conscious, long-term, cerebral planner... in a country (my parents included) that wanted to believe in a fantasy Trickle Down Economics & futuristic Strategic Defense Initiative.

‪The book isn’t a praise fest. It is also highly critical, but overall... it is about a human being who’s positive impact will live on long after he is gone.

If JC is our example, we should all be doing much more to make the world a better place.

One of My Favorites

A well-written narrative about the life of a legend. I enjoyed every minute and I highly recommend this book to all.

Not bad but highly partisan look at Carter that borders on worship/sycophancy. Author points out some of Carter’s flaws but includes a footnote where Trump or the Republicans did the same thing but much worse. Narrator is not bad. He has a rich voice but he is really off on the sections where drama or excitement are needed...it seems forced.

Too much criticism of Reagan and Trump

I would not recommend this biography only because the author is so annoying in constantly bringing up Trump (40 years later??) and Reagan (comparing Carter favorably with them, "Carter messed up, but at least he wasn't like Reagan or Trump!!") and his obvious liberal bias. "Democrats and Socialism is obviously good, and Republicans and free markets obviously bad". Just stick to YOUR subject, you are writing about CARTER. But probably there aren't a lot of good biographies about a president who achieved a 23% approval rating so this might be the best of a bunch or bad biographies.

Great recount of his life, & best so far, but bias

Great recount of his life, & best so far, but biased. It does get in the way.