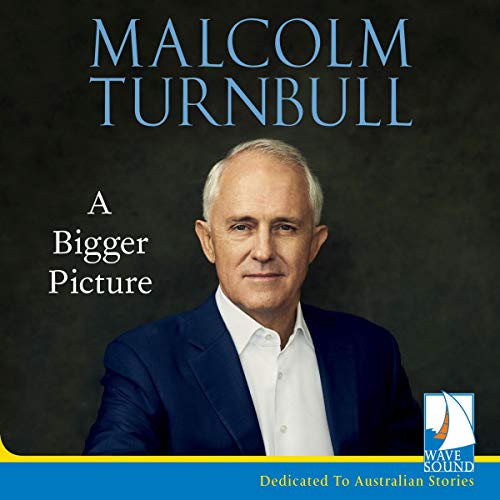 Candid and compelling, A Bigger Picture is the definitive narrative of Malcolm Turnbull’s prime ministership. He describes how he legalised same-sex marriage, established Snowy Hydro 2.0, stood up to Donald Trump and many achievements – remarkable in their pace and significance, and that they were delivered in the teeth of so much opposition.

But it’s far more than just politics. Turnbull’s life has been filled with colourful characters and controversies, success and failure. From his early years in Sydney, growing up with a single father, to defending ‘Spycatcher’ Peter Wright against the UK government; the years representing Kerry Packer, leading the Republican Movement and making millions in business; and finally toppling Tony Abbott to become Prime Minister of Australia. For the first time he tells it all - in his own words.

With revelatory insights on the workings of Canberra and the contentious events of Turnbull’s life, A Bigger Picture explores the strengths and vulnerabilities of one of Australia’s best-known and most dynamic business and political leaders.

What listeners say about A Bigger Picture

Really enjoyed this. I have a keen interest in Australian politics even though I am British. Australian politics is even more brutal than ours and "rolling" a sitting PM seems to be almost compulsory since Kevin Rudd.
I find Mr Turnbull an interesting listen but he seems to be slightly deluded. Apart from the first resignation from the leadership of the Liberals, he accepts virtually no responsibility for his own demise. He is not blameless in the games and back biting that typify Australian politics but is keen to portray the opposite.
I urge you to purchase this but take it with a pinch of salt in terms of historical accuracy.
It is however an interesting listen.

A brilliant insight into one of Australia finest statesmans of the modern era, with an interesting balance into the world of big business and politics. Highly recommended.

I really enjoyed the book and hearing Malcolm telling his story in my view brought it to life.

Malcom is a terrific story teller, as an author and speaker. I found his memoir to be insightful, engaging, educational and very easy to digest. It’s a 25hr listen which I did over 5 day. Perfect listening for being stuck inside during the pandemic. One of my favourite aspects of the book was the insight into the party politics. If you’re politically junky, this will be a very fun read. Malcom’s pre political career which takes up at least half the book would make for a great tv mini series, particularly his time working for Kerry Packer.

Thankfully, Malcom has a very clear and articulate sounding voice so he makes for a great narrator of his own story.

Too progressive for the Liberals and too conservative for Labor, in hindsight it is obvious Turnbull was destined to soar to great heights and then ultimately crash back to earth in the wild west world of Australian politics.

The last of the tragic comedy of premiers that was Rudd, Gillard, Abbott and himself. He was the yin to Tony Abbott's yang - progressive, intelligent and statesmenlike to Abbotts street thug persona though was poisoned by their bond. The book explores the rivalry of the four leaders and offers an insight into Turnbull himself.

I was fascinated by his heroic father and would like to know more about this man's philosophy and role crafting young Turnbull. Personally, the chapter on Aboriginal issues seems redundant to the overall story. It feels like a politically correct inclusion but has few ties to the wider narrative.

The performance is excellent - Turnbull could have easily been a full time audio book narrator, if investment banking, journalism and politics hadn't worked out. He reads well.

An excellent memoir, which I'm sure I'll read again in the future (very rare with political memoirs). Good luck to Mr Turnbull for the future.

I’d never read a memoir before, and I’ve never been a conservative voter. Turnbull was a great PM with strong convictions and has made some interesting revelations about the inner workings of the government and some key people in this book. As I recall the events we heard in the media over the years, it all makes sense. The writing is elegant, and even the dull policies have been made to sound interesting. Highly recommend this book!

Great insight into the drivers and experiences of The 28th PM!

A very interesting insight into life in politics from the eyes of a level headed person trying to navigate their way through what appears to be a sea of headless chickens in Canberra (feat. tony abbot). Also a great background and summary of some of The Turnbull governments key achievements, visions and ambitions for Australia. Great listen and well narrated, thanks for sharing!

A very intriguing read particularly for someone who is not familiar with Australian politics. I agree with the other listeners with regard to the modesty comments !

Malcolm is perfect according to Malcolm

Parts are interesting. However some modesty wouldn't hurt. It gets boring after a while listening to how perfect Malcolm is.

This is an excellent resource for learning about Malcom Turnbull, both his personal and political career. It is clearly composed and expertly narrated, paying attention to many of the most important milestones of his times as PM.
However, it is marred somewhat being an autobiography by a confident, self-assured, and successful individual. Turnbull lacks critical self-reflection and presents his interpretation of the motivations of critics and rivals with undue certainty.

This is the memoir that Turnbull always planned to write

With each chapter, I kept checking the time remaining. We were rolling through the years and I wasn’t sure what Malcolm still had to say as the clock suggested only half way through, yet I knew we were nearing the close of his political career. He did however find plenty to say, very much to his own praise.
While I cheered and argued with him during the narration, I enjoyed the personal reflections especially the great love story of he and Lucy. I look forward to Lucy’s memoir at some stage, as they clearly share a devoted love for each other and the progress of Australia and Sydney.

Not one for the haters, slightly frustrating for fans from the left that always dreamed of leather jacket Mal. A marathon I accomplished, I’m not as proud as his own ‘contribution’ to marriage equality.

self serving but interesting

this is a self serving book where everything turnbull did he did for the betterment of aust and everyone else is a schemeing3 politician. that being said it is an interesting look at recent times in Australia

Excellent book full of fascinating insights. Thoroughly enjoyed it! Became addicted to the 2nd half

Seeing the inside of Malcolm's brain

Clearly Turnbull is a very smart man, and amoung politicians a standout.

This is his side of the story, and as a result you don't get the other side. I've met people recently who worked with Malcolm and his story here is not always 100% forthcoming.

However, compares to the rest of his party, his views are so much more based in science and economics, and not religion or dogma, so kiddos to Malcolm for that.

His Achilles heel seemed to be the same thing that got him to power: being reasonable on the face of unreasonable people.

our system is broken

As an HSC student 35yrs ago, political science was my favourite subject. I continued its study at university as an elective and it continued to be an interest. whilst I've never had a career in public service or politics, it's always been a subject close to my heart, even though my career flourished in the tech / entrepreneur sector.

I looked forward to this book, to hear the insight of a successful, lawyer, vc, politician, and subsequent PM.

This tome does not disappoint. I thoroughly enjoyed PM Turnbull's narration, he's a natural speaker, and enjoyable to listen to.

This book should be essential reading in schools. not only does it highlight how our Australian Political system is systemically broken, but how vested party interests, dilute their electorate interests, but more fundamentally, have Zero accountability for their collective incompetence.

Turnbull highlights that commercial competence, corporate insight, and how deep economic management experience, is lacking in 99% of our elected political representatives.

To think our Parliament is still debating the validity of climate change blows my mind. Our system is broken, and the existence of factions within parties is the pure evidence of this.

If members of the voting public acted like any of Malcolm's parliamentary cohort in the private sector they would be sacked.

The authors, frankness, insight, and honesty only confirm my earlier suspicions, that AUSTRALIA lost one of our greatest PMs far too early, and as a result of the attricious, self centred behaviour of his "colleagues". Integrity seems to be a lost behaviour in our politicians.

I can only hope the next generation can read this account of successful charasmatic PM, and persue a political / public service career that eradicates the current shambles and character of our current system.