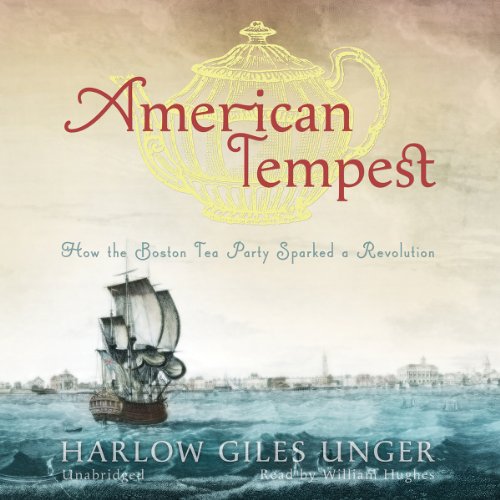 By: Harlow Giles Unger
Narrated by: William Hughes
Try for £0.00

On Thursday, December 16, 1773, an estimated seven dozen men, many amateurishly disguised as Indians—then a symbol of freedom—dumped about £10,000 worth of tea in the harbor. Whatever their motives at the time, they unleashed a social, political, and economic firestorm that would culminate in the Declaration of Independence two and a half years later.

The Boston Tea Party provoked a reign of terror in Boston and other American cities, with Americans inflicting unimaginable barbarities on each other. Tea parties erupted in American cities up and down the colonies. The turmoil stripped tens of thousands of Americans of their dignity, their homes, their properties, and their birthrights—in the name of liberty and independence. Nearly 100,000 Americans left the land of their forefathers forever in what was history’s largest exodus of Americans from America. Nonetheless, John Adams called the Boston Tea Party nothing short of “magnificent.” And he went on to say that the “destruction of tea is so bold, so daring, so firm…it must have important consequences.”

Ironically, few if any Americans today—even those who call themselves Tea Party Patriots—would be able to name even one of the estimated eighty participants in the original Boston Tea Party. Nor are many Americans aware of the “important consequences” of the Tea Party. The acute shortage of tea that followed the Tea Party, of course, helped transform Americans into coffee drinkers, but its effects went far beyond culinary tastes.

The Tea Party would affect so many American minds, hearts, and souls that it helped spawn a new, independent nation whose citizens would govern themselves.

“Harlow Giles Unger has taken a much-written-about subject from America’s past and looked at it with fresh eyes, finding insights and drawing conclusions that will startle not a few people.” (Thomas Fleming, New York Times best-selling author)

What listeners say about American Tempest

This is an impressive "read" if you want to find out more about the life and times which led to American Independence from Britain. It is thorough and objective and for a non- American like myself it paints a great canvas of the people of the era.

I don’t like this book be I had to read it for a school project, also the guy reading it sounds AI generated

A good book about a little known leader leading up to and including the American Revolution. Very informative and read well William Hughes.

This book was full of facts and ideas about the American Revolution that I had never heard before, despite doing a fair bit of reading in early American history. It is not anti American at all, but reminds us not to take everything at face value and to remember that our Founding Fathers were a variety of men with a variety of goals and motivations struggling to create a workable country as best as they could and most of them were neither geniuses nor saints.

Really enjoyed the book, especially since Unger added a few stats outside of the usual telling of the build up. Performance was well done.

Very well written, in fact I couldn’t put it down and listened to the hole thing in one day.