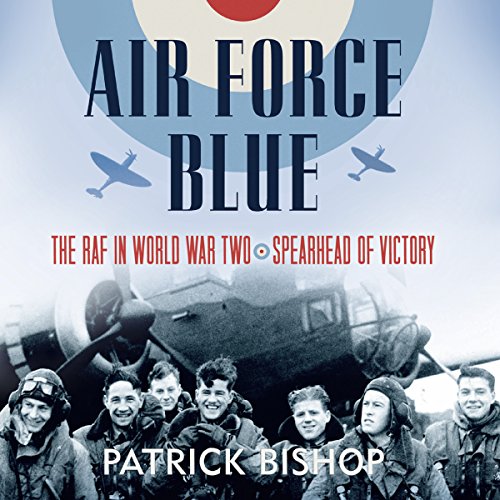 By: Patrick Bishop
Narrated by: Tim Frances
Try for £0.00

In a return to sweeping social history of wartime, Patrick Bishop - author of best-selling Fighter Boys and Bomber Boys - explores the lives and wartime experiences of thousands of men and women who served in all units of the air force, to mark the centenary of the RAF in 2018.

On 1st April 2018, the Royal Air Force will be 100 years old - a short life by military standards but an extraordinarily important and eventful one.

From the start it was special, standing sometimes awkwardly but always proudly a little apart from the existing services. It was a product of the modern age, whose fortunes depended on ever-more sophisticated machines and the right calibre of men to fly them and to keep them airborne.

Its achievements between 1939 and 1945 - when it was Britain's last line of defence and the spearhead of its counterattack - were central to the entire war effort. During these years one in four of those in uniform wore air force blue, and the ethos of the RAF was indistinguishable from the spirit of the nation.

Following his best-selling books Fighter Boys and Bomber Boys, Airforce Blue tells personal stories of those who served, using the letters, diaries and memoirs of the participants to create a true picture of what it was like to be a pilot, a navigator, a gunner, a fitter or a WAAF ops room clerk. It re-creates the reality of operations, whether wheeling over Kent in a Spitfire in 1940, rumbling towards the Ruhr in a Halifax in 1942 or looking down from the cockpit of a Liberator at the grey corrugated waters of the North Atlantic in 1943. It will also light up the humanity of the participants at every level - their values and motivations, their desires and ambitions.

Air Force Blue is a substantial work of history, a monument to the wartime RAF as a whole and a must-buy for the descendants of the million-plus men and women from not just Britain but Canada, Australia and New Zealand who served.

Praise for Patrick Bishop: "I know of no more thoughtful nor yet more moving study of their achievement." (Max Hastings, The Sunday Telegraph)
"Deeply humane, lucidly written and powerful...Bishop, a war correspondent, has a keen eye for the stresses and strains of the job these boys did.... All this bravery, and the way of life that supported it, are faithfully recorded in Bishop's refreshingly unpretentious account." (Michael Burleigh, The Sunday Times)
"This is the best kind of military history - the kind in which the author never loses sight of the impact of war on its victims, German as well as British, and those who were left behind. Bomber Boys will remind the survivors that they and their lost comrades are not forgotten. And it reminds the rest of us what their war was all about." (Daniel Johnson, Evening Standard)

Only a cursory coverage of the Far East but otherwise pretty much everything is there.

A clarion call for the RAF.

I enjoyed this book because I have known WW 2 RAF Veterans and this mirrors their stories and feelings. While tending to be on the side of the the more junior people it gives a sense of the 'good war' that was clearly felt by those concerned. I would recommend this book as an introduction to the RAF for anyone studying World War 2.