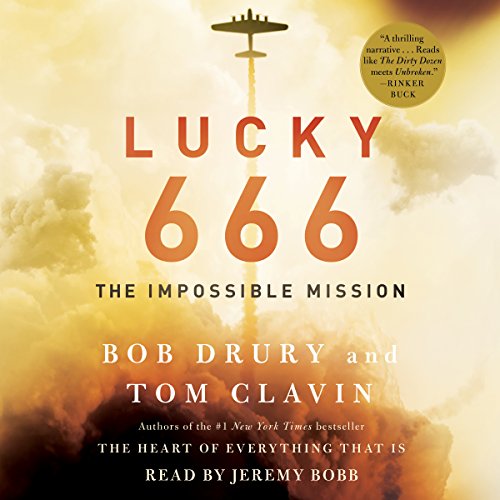 By: Bob Drury,Tom Clavin
Narrated by: Jeremy Bobb
Try for £0.00

From the authors of the New York Times best-selling The Heart of Everything That Is and Halsey's Typhoon comes the dramatic untold story of a daredevil bomber pilot and his misfit crew who fly their lone B-17 into the teeth of the Japanese Empire in 1943, engage in the longest dogfight in history, and change the momentum of the war in the Pacific - but not without making the ultimate sacrifice.

It is 1942, the Japanese war machine has rolled up nearly all of the Pacific Theater, and American forces are clinging to what little unconquered territory remains. While US Marines claw their way across Guadalcanal, small contingents of US Army airmen make their way to the lonely, embattled Allied airbase on Papua New Guinea. Their mission: to defend Australia from invasion, harass Japanese supply lines, fly perilous bombing missions over enemy-held strongholds, and make reconnaissance runs to provide intelligence for America's nascent island-hopping campaign.

Among these men are pilot Captain Jay Zeamer and bombardier Sergeant Joseph Raymond Sarnoski, whose swashbuckling reputations precede them. Zeamer, who cannot convince his superiors to give him his own plane, teams up with Sarnoski to recruit a crew of fellow misfits to rebuild a dilapidated B-17 bomber from spare parts in the base's junkyard. They christen the plane Old 666, naming it from its tail identification numbers. In June 1943, Zeamer and Sarnoski and their crew volunteer for a 1,200 mile suicide mission into the heart of the Japanese Empire that may well change the course of the war - but that only one of the two friends will survive.

In Lucky 666, Drury and Clavin bring to vivid life one of the last great untold stories of World War II. Featuring personal letters, diaries, US Army Air Force after-action reports, even the translated Japanese Imperial Air Force's official account of the longest dogfight in history, Lucky 666 is a tale of friendship, heroism, and sacrifice set against the horrific backdrop of vicious aerial warfare, wounded crewmates, and a white-knuckle emergency landing in the jungles of New Guinea - a must-listen for anyone who loves pulse-pounding narrative nonfiction.

What listeners say about Lucky 666

Brilliant book, emotional, in depth, personal and just a fantastic listen... not ashamed to say brought a tear to the eye at the end

Would you listen to Lucky 666 again? Why?

I will listen to this book again, mostly because it's narration of the aerial battles fought in the South Pacific is riveting. This is an excellent book to help understand what our underfunded and under equipped Pacific Forces faced during WWII.

Jay Zeamer, the pilot, was the most exciting character, although his bombardier was not far behind him. Learning his backstory made his accomplishments during WWII all the more heroic.

The narrator did a good job of capturing the excitement of the aerial gun battles as well as the pain of losing friends and fellow airmen.

The book both made me laugh and cry. There are moments when you realize that all that stood between the United States and tyranny were a few brave men willing to go up in broken-down bombers and take the fight to an enemy that was better equipped, better trained and motivated by a blind allegiance to a man they thought of as God. That we prevailed is a tribute to those fine airmen

If you have never worn the uniform, if you have never endured shared sacrifice, and experienced the espirit de corps that comes from military service, this is probably going to be an interesting yarn. But if you have lost friends, suffered at the hands of nature or this country's enemies, and otherwise experienced the life of a soldier, sailor, airman or marine, then you will find in this book the story of your brothers in arms, brave men who went up in cobbled-together aircraft, with barely enough training, and with little more than instinct to guide them, and defeated an enemy that demanded its soldiers fight to the death or be dishonored. You will feel a kinship with these men, and you will pass this book along to your sons and daughters so that they may know from whence this nation derived its statement that "freedom is not free."

This is a great story about some truly great men. There is never really a down period in the story so it kept me interested the entire time & then seemed to end way too fast. I will definitely be looking more into this subject. The performance was also very good. I listened to a lot of books that are good & interesting but find myself totally bored with the narration. That was not the case at all with this book.

This was well written and easy to listen to. Simple but precise descriptions of action made it a great listen. Most literature of the WWII air war focuses on the European theater. This gives a lot a detail about the army air forces in the Pacific theater and their very notable and unsung contributions to the war effort.

A good picture of the WWII air war in the Pacific

Have you read Catch 22? This book exposes the reality of the surreal setting of Heller's novel. I had no idea that the sense of abandonment and disarray in Heller's book had any basis in fact, but it is well documented here. Beyond good documentation, if you enjoy technical information there is great description of the qualities and design of the famous "Flying Fortress". Add spectacular, terrifying, descriptions of air combat, a good job of character development, and the result is a fascinating book. I came away with much greater insight and enormous respect for the capabilities of the men and machines fighting in that terrible war

Gives me a whole new respect for the pilots of WW2. What an inspirational story. Well done.

GOOD, BUT ALSO A LITTLE DISAPPOINTING

There is no doubt at all these gentleman were beyond brave, & still as of this day remain the flight crew who have been awarded the highest medals of any combat crew.

So why am I disappointed. Well, the righting is very good as is the narration, but the first half of the book basically outlines the history of the war in the Pacific, I felt that detracts from keeping the focus of these stunningly brave men.

After all the war in the Pacific went on for many years & involves many islands so it seems rushed to try & include the entire history of it in such a short book. The background story is relevant to the main characters stories, but would have much rather the author go into so much more depth about the combat crew as they are the heroes, & the story should be focused more on them.

It could also be that their real feat of staggering bravery is encapsulated in one single stunning mission. So maybe it was just a case of padding the book out a little by including a broad view of the war in the Pacific.

It is good, but I would recommend, "Unbreakable" or "A Higher Call". Those two focus only on the main characters & do not get bogged down with to much overview of the entire war. They are fantastic books & cannot recommend enough.

One of the best audiobooks I have ever heard! Well worth the money and time.

Great story, but some holes

Lucky 666 was an amazing story of Second World War flight innovation, determination, and bravery. This is the story of a rag-tag crew of outcast airmen who go on to take it to the Japanese empire singlehandedly and with characteristic pluck and confidence.

But the book does a bit more than just cover the crew (and this is what earns it 4 stars). It also covers a lot of the history surrounding the Japanese occupation of Indonesia and the islands north of Australia, and what role the USA played in that area while focusing on the European Front. The story of the pilot, Jay Zeamer and his crew is pretty amazing, even though the backstory can be disjointed and the narrative jumps big lengths of time, but the context of the war in the Pacific really helps situate the reasons why such a crew could exist and why their missions were important.

The book all comes down to the "impossible mission," a photoreconnaisance flight over a Japanese stronghold that was outside fighter escort range and that, at the last minute, has another photo mission added in. It results in what was apparently the longest dogfight in Second World War history, some major injuries to the crew (and a death), and a rather dramatic result. I didn't really like the way the fight was described though, seeming to have less action than I expected, feeling more like an epilogue to the story than the main climax.

All in all, a good book, amazing war story, but with some holes I would have liked to see done better.

Great! Any WW2 buff must read/hear!

What was one of the most memorable moments of Lucky 666?

The detail of the last mission

Powerfull true story that will make you proud and make you cry.

The story was touching and powerful, the narrator was excellent. The story was excessively stretched by background unrelated to the mission and people. It is more wholly educational than story driven.