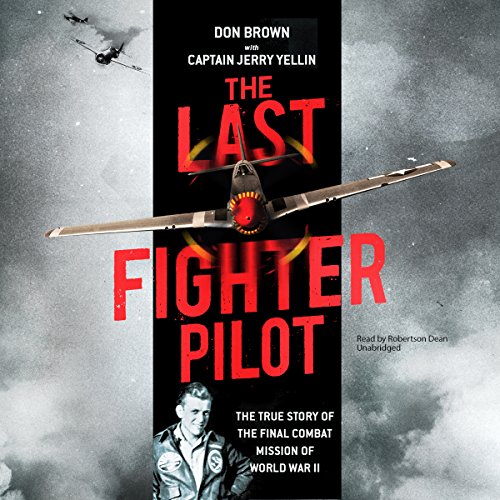 On the morning of August 15, 1945, Captain Jerry Yellin flew the last combat mission of World War II out of Iwo Jima. Today, Captain Yellin is a sharp, engaging, 93-year-old veteran whose story is brought to life by best-selling author Don Brown (Treason).

From April to August of 1945, Captain Jerry Yellin and a small group of fellow fighter pilots flew dangerous bombing and strafing missions out of Iwo Jima over Japan. Even days after America dropped the atomic bombs - on Hiroshima on August 6 and Nagasaki on August 9 - the pilots continued to fly. Though Japan had suffered unimaginable devastation, the emperor still refused to surrender.

Best-selling author Don Brown sits down with Yellin to tell the incredible true story of the final combat mission of World War II. Nine days after Hiroshima, on the morning of August 15, Yellin and his wingman First Lieutenant Philip Schlamberg took off from Iwo Jima to bomb Tokyo. By the time Yellin returned to Iwo Jima, the war was officially over - but his young friend Schlamberg would never get to hear the news. The Last Fighter Pilot is a harrowing first-person account of war from one of America's last living World War II veterans.

What listeners say about The Last Fighter Pilot

Honestly blown away with the detail and history of this audiobook.
What hero’s we had back then and what a different world we would be living in today without them.

The foreword tells the story.

A great story of a short snapshot of the final day's of the war in the Pacific in the last few months of WW2 Pacific campaign.
Some over egotistical claims, normal for the US eg Black Widow being time first radar equipped aircraft in the world despite it entering service 4 years after the British Bristol Beaufighter, and the P51 being the most advanced... Yet using British engines made under license.

These poorly researched facts spoilt an otherwise fantastic account of these brave men.

A history Air War in the South Pacific & Iwo Gima

My father was a P51 fighter pilot and squadron leader in the same fighter group. He told me a few stories over the years but did not go into a lot of detail with many until the year before he died. I now see the bigger picture of what that was like. My dad was in the first fighter squadron to land on Iwo Gima, survived (barely) the night "banzai" attack, and 14 missions over Japan. Thank you Captain Yellin for this account of the Pineapple Air Force! (7th Air Force). These were great men. Many did not return.

This is more of a history story about a small portion of the air war in the Pacific than it is about fighter pilots and flying. If you're looking for combat flying stories this book is not for you. No disrespect to Capt Yellen as he's one of the best and bravest. I just wish the book was more about his exploits as a fighter pilot.

There are many repeated comments but the history is well worth knowing and the personal information makes it all the more interesting and memorable. This book introduces us to young flyers of this war that should be memorialized and recognized for their guts, common sense, love of fellow man, high morals and patriotism. This book, though sometimes repetitive, kept my attention enough to finish and introduced me to the fine flyers of the last group of fighter pilots to fly in WWll. (Since I lost an uncle on August 11, 1945 while flying in a Liberator over the Pacific all books of this type interest me very much.)

My husband who is an airforce pilot was immersed in the story. He enjoyed the history and as a pilot connected with the actions of the fellas in the story.

This book recounts the honor and integrity of one man’s dealing with the trials of war. He was one of what has been has been named “the greatest generation”. They were indeed great. Today’s and future generations have men and women of the same caliber. We can only hope they are allowed to step forward.

Another Piece of the American War Puzzle

This book honors those who were willing to lay it all on the line for the USA. I love our history, and this book fills in a part that many of us have never thought of. This was a good read.

Too much technical information used.

The narrator did a fine job. He was very easy to listen to. This is great story and I really enjoyed listening to it. Fills in lots of blank spaces that were left out by Hollywood in all the movies they produced about this subject matter. Glad I purchased it!

this book brought tears to my eyes, especially the end which was very powerful

I started out this book thinking it was just going to be the story of one pilot during World War II but instead it was a very Thorough history of US air core aviation in the Pacific theater. It was an outstanding book and one I need to keep in my library and refer back to often.