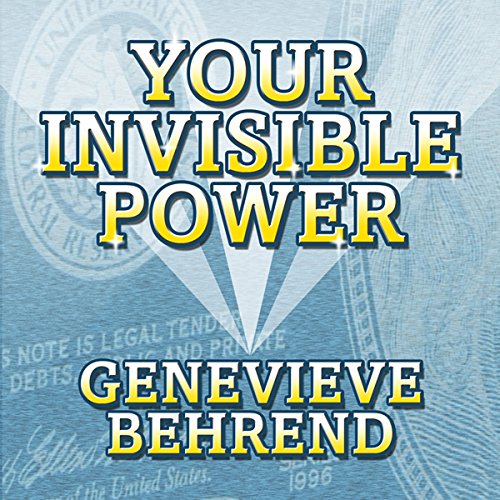 By: Genevieve Behrend
Narrated by: Marguerite Gavin
Try for £0.00

Respect, trust, and commitment are the cornerstones of a dedicated relationship between a teacher and a student. For a passionate student yearning to learn and understand the essence of a subject, they must demonstrate these traits before a teacher will take them under their wing. In this case, the teacher was Thomas Troward of Cornwall England and the student was Genevieve Behrend. He imparted his personal insight to the one and only pupil who could perpetuate this knowledge and share it with the world.

Not long after her time with Troward, Behrend began her mission in New York City where she established and headed The School of the Builders up until 1925. She then established another school in Los Angeles before touring other major cities throughout North America for the next 35 years as a celebrated lecturer, teacher, and practitioner of Mental Science. Your Invisible Power was her first book and remains her most powerful and popular work.

Behrend presents the Troward philosophy at its best because of the way her incomparably direct, and dynamic personality relates the life-changing concepts on a personal level. Behrend says, "We all possess more power and greater possibilities than we realize, and visualizing is one of the greatest of these powers".

Listen as she offers you a powerful, yet simple and easy guide to open up the way to the attainment of your desires.

What listeners say about Your Invisible Power

Wonderful book based on Thomas Troward's teaching. Nice pace to the narrator's voice although quite a strong American accent.

Very clear principles.
Very nice book.
I wish the chapters were divided into several segments in this audible version.
I liked the narrator more and more as the listening went by.
Overall enjoyed it 👍

Out of all the audio books I've listened to, this one just went in one ear and out the other. I really struggled with the narrator.

The pace and tone of the narrator was good making it easy to listen to.
There is a ton of great inciteful information that explains so well the power of your thoughts.
The second part of the book for me was the most valuable as it didn’t just end it provided further information for deeper understanding of the subject matter.

This is a must read for anyone into personal development.

Books reminding us of the power of the universe and our own power within it to visualise and manifest what we dream of are always worthwhile, and this is one of those books. Sadly I had to rate it lower than I would have liked due to the point below

Very unfortunately, in places, the narrator seems to simultaneously be in a 'fastest reader' competition, or rushing to complete it as soon as possible because there was only a limited time in the recording studio. The speed of the narration and the quickness of the flow of the words makes this a rather difficult book to follow. It is necessary to read this more slowly in order to understand some of the concepts, so my advice would be to buy the paper book instead.

The ONLY COMPLETE VERSION !

Compare the audio to different version of the Kindle version and you'll find that this one contains stuff which is not even mentioned in most Kindle versions.

I loved this book and will listen to it a thousand times over so that its deeper truths are burned into my being! It also inspired me to immediately get her mentor’s book called the Edinburgh Lectures On Mental Science and The Creative Process In The Individual by Thomas Troward. I’ve been successfully practicing visualization and manifesting my desires for years but I believe the clarity communicated in this book will take my growth to the next level! Heard about Behrend over 5 years ago in The Secret and am so glad that this book finally found its way into my life! It’s simple, powerful and clear! The narration by Marguarite Gavin is equally unmatched!

Who would you have cast as narrator instead of Marguerite Gavin?

I agree with comments about the speed of the narration, initially it was very annoying, however the information is so powerful I gradually got used to the "speed reading." While the information in this book is out there in so man "Law of Attraction" messages, it is great to get reminded again in a unique way. Actually I have listened to this book many, many times and will continue to; while here and there it is a little confusing, for the most part, the way most of the principles are discussed is, although fast, it is straightforward.

Arm yourself with what you ACTUALLY need

We live in a world full of options and as such, we become overwhelmed at times.. Learning to focus and how is of paramount importance. Within these words, you are given a way to do just that. Contemplate this information and apply it daily. Words without action are useless, but action alone is no better.

This book has given me the pathway to know when and how to act as well as how best to focus those actions. I truly feel that you will receive the same and hope that these words may be the nudge you need to take your first step towards happiness. -Be well in all things.

Must have for life

Timeless listen. I’ll always get something new from listening to this book. Her voice is great and the material is greater.

Life changing actions steps to employ as life advancing/winning practices, preceded by life changing words to speak forth to self, preceded by the thought ideas our soul can trust (thus, bring contentment); advancing thoughts.

Utmost, introduction to the idea we are perfectly purposed (in mind, body and spirit) to do what is ours to do.

familiar with "The Secret"?

Then this is the foundation, the foundry, and the future of understanding it fully. This work does and will serve, hopefully as far and wide as possible, as part of an education based in the modern world, and not an education born of the industrial aged ego.

Very easy to listen to and follow. There is am extra bonus at the end of the book with articles in a similar vein from other authors.