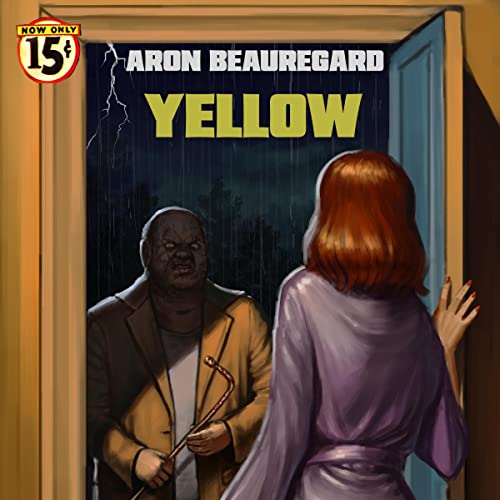 By: Aron Beauregard
Narrated by: John Wayne Comunale
Try for £0.00

What would you do if they took everything?

Oliver Fitch has a troubling issue: He lives in a state of constant terror. After purchasing a convenience store in a once civil society, the streets around him have rapidly devolved into utter lawlessness. They're now festering with sinister gutter scum that live only to harass and intimidate him. His pathetic profits are gouged under the threat of violence, and there isn't a damn thing he can do about it. Because in a city with no rules, where the sun never shines, the authorities are no help. In fact, they're an equal part of the problem.

The relentless fear of confrontation is so obvious that even Oliver's wife, Lydia, has grown to resent his spineless existence. The absence of bravado opens the door to a horrific home invasion that leaves the miserable pair savagely maimed. From there, things only get worse until the criminal leeches have taken everything. Until there's nothing left inside but hate and the gnawing hunger for revenge. Until a switch finally flips and Oliver realizes that they all have to die.

What listeners say about Yellow

Extreme horror at it's best. If you enjoyed this check out Kristopher Triana's books too. You won't go wrong.

So disturbing that it pulls you in

Not to give too many spoilers but the only thing worse than seeing you wife get raped is seeing her start to enjoy it.

It was okay. The book felt less like a horror book and more like “lets see how sick we can make you.” Which is fine I guess. Not as well crafted as I had hoped.

Excellence of a story, although I have a hankering this could never be a movie…..lol

Horrified and Loved it.

this gives off big the crow vibes but much bloodied and grotesque revenge. loved it.

First off, the narrator was beyond amazing. Great with the appropriate accents for each character. The story is a giant love letter to vigilante flicks like Death Wish, The Punisher, etc. Brutal and satisfying.

I don’t agree with Oliver, but I understand….🤣
My first Aron book & now I must binge everything else!!!”

As promised, entertaining and thoroughly disgusting. I enjoyed it and also had a queasy stomach the whole time.

Bonkers in the best possible way!

I’m definitely a fan of Aron Beauregard now, for sure.
This was my first encounter with his work and it was one hell of an experience.

Clearly, this type of extreme entertainment is for a select few and I’ve spent my entire life going after line-crossing media like this. I love a good revenge story, but when you mix in all this other insanity, your jaw will hit the floor. It caught me off guard multiple times and had me laughing out loud at the great dialog and storytelling.

It is super easy to judge a book like this, but there is a lot more going on here than you might think. Allegories, symbolism, commentary. It is all here with a super gross wrapper and it was a blast.

John Wayne Comunale did an awesome job with it and his voice and delivery were spot on. I can’t wait to check out Aron’s other stories, because despite the genre deep end of the pool here, he is a FANTASTIC writer!

splatterpunk is hit or miss for me. Aaron' a hit!

this was my second of his, and first on audio. I can't decide if I want to binge the rest or spread them out.

The story was twisted but amazing and well written . I felt for the protagonist , loved all that was messed up and crazy. This is .. really great !!!