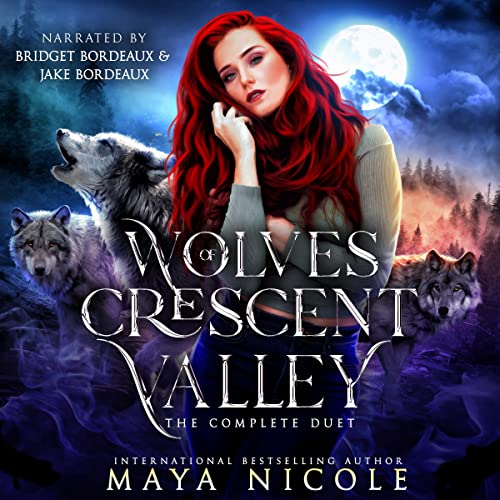 By: Maya Nicole
Narrated by: Bridget Bordeaux,Jake Bordeaux
Try for £0.00

I never knew what living was until I stepped foot in The Guillotine Nightclub.

My intentions weren't just to bartend, but to gather intel on the lone wolf who owns the place. Instead, I found myself in much deeper with the wolves of Crescent Valley than I'd ever imagined.

They're working with dangerous humans who know about our secret world, and it could put all shifters at risk.

Making matters worse, my feelings start to grow for my new boss, who has the weight of a secret on his shoulders - a delicious psycho who is obsessed with me but melts my heart, and a mysterious fighter who has something to prove.

I've lived my life in a bubble, but that bubble is about to burst.

Can I protect the three men who have stolen my heart while protecting our kind, or will everything crumble around me?

Wolves of Crescent Valley is a complete duet which includes Fox Undercover and Fox on the Run. It is told in multiple POVs, and the main character does not pick between the men. Contains mature scenes, male/male, and adult language.

What listeners say about Wolves of Crescent Valley: The Complete Duet

Red and the big bad wolves!

This duet is amazing. I also bought the audio book. It's amazing as well. Such a great story and I love how strong the female lead is! Ren is a bad@$$ shifter the works for basically the shifter police/government type thing. I love the scenes when she over powers the men in hand to hand combat. She's awesome! Must read!

wren, the Fox shifted into her human form. She was ready to go undercover for her job. Nothing could let her know that she finally would find the pack and love she always wanted.