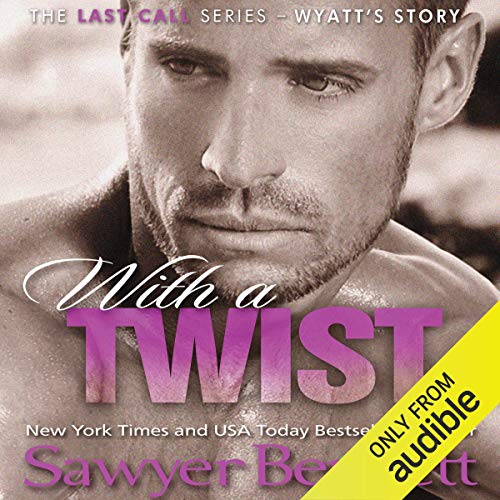 By: Sawyer Bennett
Narrated by: Douglas Berger,Bunny Warren
Try for £0.00

Wyatt Banks is ready to give one woman the world. Unfortunately, his job as a cop tends to interfere with other goals. When Wyatt is sent deep undercover to investigate a sex slave ring, he doesn't have time to do anything but focus on staying alive in a dark and dangerous underworld.

What listeners say about With a Twist

I have grown to love the narrative of the last call Series and this book was not a disappoint. Wyatt and Andrea have such an immediate connection that you just knew their chemistry would be off the charts!

Not as steamy as Galvin!!!

Love the book....expecting more horror! Not deep enough. Not a bad read. Don't skip. NEXT!

I love the store line and these characters! These characters will have you laughing and rooting for the ending that you know you want!

My favorite book in the series!

Would you listen to With a Twist again? Why?

I probably will at some point, especially if I am on a longer car ride.

Wyatt is my favorite character. I love how he is an alpha male but has a heart and feels bad when he has to do things that aren't like him for the sake of his job.

Which character – as performed by Douglas Berger and Bunny Warren – was your favorite?

Douglas Berger did a great job with Wyatt.
I had a hard time reconciling Bunny Warren's southern accent with Andrea's character because I knew that she wasn't from the south.

I loved this book for a long time, so no crying or laughing but more of a soul satisfying feeling.