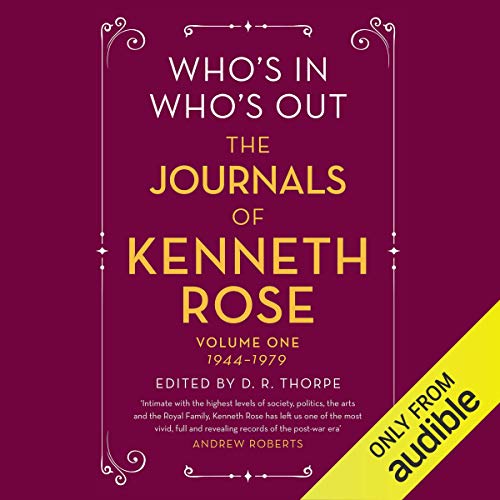 By: Kenneth Rose
Narrated by: Barnaby Edwards
Try for £0.00

Kenneth Rose was one of the most astute observers of the establishment for over 70 years. The wry and amusing journals of the royal biographer and historian made objective observation a sculpted craft.

His impeccable social placement located him within the beating heart of the national elite for decades. He was capable of writing substantial history, such as his priceless material on the abdication crisis from conversations with both the Duke of Windsor and the Queen Mother. Yet he maintained sufficient distance to achieve impartial documentation while working among political, clerical, military, literary and aristocratic circles. Relentless observation and a self-confessed difficulty 'to let a good story pass me by' made Rose a legendary social commentator while his impressive breadth of interests was underpinned by tremendous respect for the subjects of his enquiry.

Brilliantly equipped as Rose was to witness, detail and report, the first volume of his journals vividly portrays some of the most important events and people of the last century, from the bombing of London during the Second World War to the election of Margaret Thatcher, Britain's first woman Prime Minister, in 1979.

What listeners say about Who's In, Who's Out

It is so valuable to have a first hand account of all of this period of British history. I can’t wait for the second volume to appear on audible to actually hear Kenneth’s account of things I can actually remember.

Where is part two?

Really great listen. Am disappointed that no sign yet of part 2.
Very classy gossip and memorable history. Perfectly narrated.
Kenneth

Riveting. Excellent detail and lots of anecdotes. I will relisten to it again and again.

This book has completely changed my views of the "Establishment " and Kenneth Rose's access to the people of position and power. The desire to know more about Rose himself about whom little is known is contrary to his revelations. I hope to hear his further journals in the future. Absolutely recommended.

What an entertaining listen. A large chunk of mid-century British through the eyes of someone close to the establishment, but in many ways critical of it. Bring on volume two!

An Excellent Slice of Mid-Century History

I thought this very well done. Of course for those not interested in 20th century history it will not resonate. However, I was absolutely fascinated. And while so many of these types of diaries can be bitchy and unkind, I thought this was exceptionally fair. The writer was well-balanced and likable. The narration was excellent and it was a perfect combination of gossip and genuine historic record keeping. I would highly recommend it.