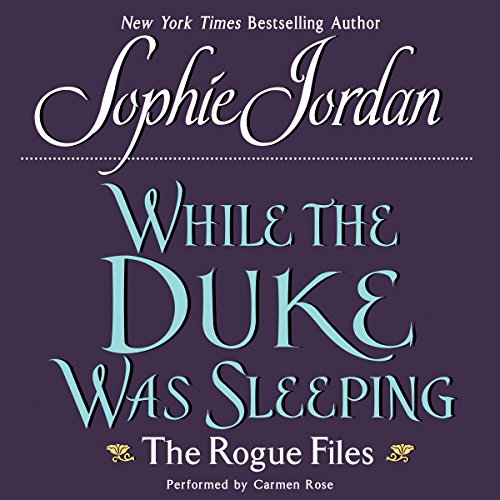 While the Duke Was Sleeping

By: Sophie Jordan
Narrated by: Carmen Rose
Try for £0.00

Sometimes the man of your dreams...is not who you think.

Shopgirl Poppy Fairchurch knows it's pointless fantasizing about the Duke of Autenberry. Still, dreams can't hurt anyone, unlike the carriage Poppy spies bearing down upon the unsuspecting duke. After she pulls him to safety, the duke lapses into a coma, and Poppy is mistaken for his fiancée. But one person isn't fooled: his arrogant and much too handsome half brother, Struan Mackenzie. Soon Poppy isn't sure what she wants more: the fantasy of her duke or the reality of one smoldering Scot who challenges her at every turn.

An illegitimate second son, Struan may have built an empire and established himself as one of the wealthiest men in Britain, but he knows he will always be an outsider among the ton. Just like he knows the infuriating Poppy is a liar. There's no way the haughty Duke of Autenberry would deign to wed a working-class girl. It doesn't matter how charming she is. Or tempting. Or how much Struan wants her for himself.

What listeners say about While the Duke Was Sleeping

Excellent example of the popular romance genre. The story was interesting and thoroughly engaging, character development spot on. I liked how Mckenzie was a grumpy bugger all the was through and not suddenly a sweet bloke.
I would totally listen to more from this author based on this book.

This was a good remake of while you while you were sleeping. Poppy who is a regular shop girl has a huge crush on the Duke who doesn't even know who she is. She ends up saving his life from a carriage while he is in the middle of a fist fight with his half brother. It is a good story worth the credit.

While you were sleeping

Almost a duplicate of the most recent movie, except set in regency era London... no originality but really good all the same. I always kind of liked Struan McKenzie... in previous books from this author. I enjoyed this book, regardless.

While you were sleeping spin

I really loved the story. However it was much like the movie, While you were sleeping. Coma etc.

Yes if you’ve seen the movie you can definitely predict what’s going to happen in the book, but I thought it was well done. The ridiculousness is funny and the characters are charming. I do wish the sisters had more of a moment at the end where they addressed their issues, but the small one they have is fine. I just wanted more. Overall fun escapism reading. With lots and lots of steam.

I love this story really sweet. Not as much sex as in other books in this series but helps to set up the next few books in series. It’s truly a cute book.

I read this when I needed a HEA story. It was ok. Not the best narration I've heard Carmen Rose do but, then again, the dialogue was a bit stiff.

While You Were Sleeping Remixed

If you want a original story this isn't it. This a copy of the 1990's movie with Sandra Bullock but set in 19th century England. Very disappointed and I hope that a few was paid to the original screen writers.

Great book. I was looking forward to this book and it did not disappoint & Carmen Rose is perfection

Loved the movie While you were sleeping. So I really liked this book. Very cute

I struggled through. The narrator was very flat and didn't seem interested in what she was reading. Minimal effort. The author could have fleshed out a direction for the main characters a lot more.