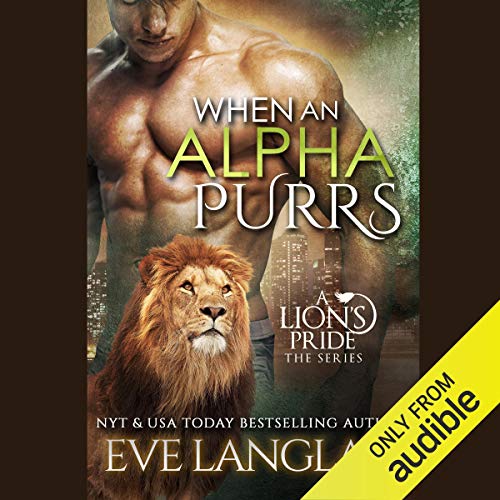 When an Alpha Purrs

By: Eve Langlais
Narrated by: William G. Humphrey
Try for £0.00

A lion's pride isn't only defined by those he commands but also resides with his hair, so when a human dares to butcher Arik's mane, he gets his revenge - and claims her as his mate.

A billionaire CEO and leader of the largest East Coast pride, Arik is a ladies' man and a lion. Used to commanding others and obedience, he can't believe it when a hairdresser with tempting curves chops off a hunk of his precious mane. But her biggest mistake is in running from him. Run as fast as you can, little mouse, because this cat loves to chase - and pounce. Oh, and he also likes to nibble on tender bits. What he doesn't expect is to fall for a human woman - a woman who can make the impossible happen because everyone knows lions can't purr...until now.

What listeners say about When an Alpha Purrs

Don't let the narration put you off this series.

I purchased the audio book because I own the ebooks and really enjoy this series, but the narration of this story was HORRIBLE!!!!

The byplay between a clueless human woman and the "I Am The King" Alpha Lion was hilarious!

What didn’t you like about William G. Humphrey’s performance?

Honestly, I didn't like anything about his narration. It was flat and emotionless.

Was When an Alpha Purrs worth the listening time?

If you can get past the narration, the story is really worth the time to listen.

I usually don't like it when a series has a different narrator for each book. The narrator of the second book does a MUCH better job.

Narrator is not the best

I believe the book would've been relatively entertaining however The narrator just left a bad taste in my mouth. He didn't really get the characters right I don't think. It's not like he was awful he just didn't seem to make the story flow well. This needed Charlotte Kane from Shelley Laurenston's Pride Series she would have done a much better job.

What a surprising new series

This is a great new series filled with humor, hot sex, humans and different types of shifter. The narrator did a good job. I have downloaded the rest of the series. Worth a credit

Loved the book and had me laughing in some parts and in other parts got the tingle going.

Lots of sass, snark and fun.

Arick is a billionaire lion shifter and leader of the New York pack. When he goes to his favorite barber shop, his usual barber is not there. His next choice for a cut is the niece of his barber. He doesn't believe a little mouse of a girl can do him justice. As she is his best option, he decides to let her cut it. Of course his belligerent attitude gets under her skin. She's had enough so she cuts two chunks out of the front side of his hair, drops the sissors and runs out of the shop. He tracks her down and finds he can't ream her out the way he planned. He finds she is in danger from an old boyfriend and wants to help her out. Well written characters and savvy dialogue.

Basic set up here... lion shifter finds his mate, but first impressions are a motherf*cker... not going back after that... Then to piss your mate off so bad, she chops off your "Precious Mane" was just hilarious.

This was a very quick read/listen... I well enjoyed it... Nice after work listen... to pass the time til bedtime...

DNF - Way Over the Top

I've listened to other Eve Langlais books including the Cyborgs, Freakin Shifters and the Alien Abduction series and they tend to be a bit over the top, the humor kitschy but cute. However, this one I couldn't even get half way as I found myself so distracted with the over the top dialog and stupid decisions that I finally had to just stop.

I could not wait to “hear” one of the stories I really liked reading. Unfortunately the narrator killed the story for me. Sounds like he is talking from his throat, which makes all the characters sound the same. When he did the voice of the female character it was awful.
Stick to the book and skip the audiobook.
I would not recommend the audiobook.

What would have made When an Alpha Purrs better?

A different narrator. But I stuck it out because Book 2 is narrated by a different man. Sadly, that one was even worse.

It was formulaic but fine. What one would expect

Oh dear Lord. Where do I start? It was not salvageable. Get a new narrator.

If you could play editor, what scene or scenes would you have cut from When an Alpha Purrs?

The DOUBLE preview at the end. It was the SAME preview, twice. The story was therefore much shorter than I thought it would be.

Skip the Audible on this series. Read it the old fashioned way.

Loved the story and I wished there was more books of this pairing! Will buy the next one !