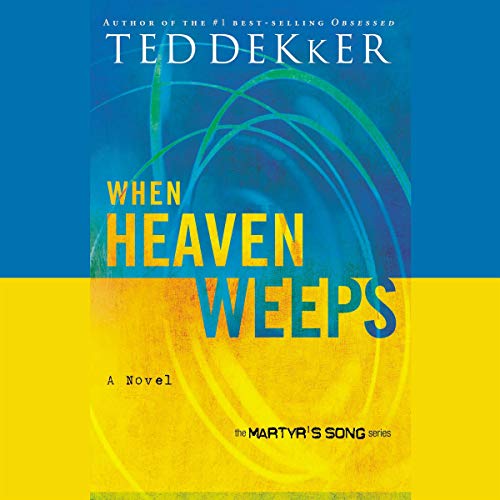 A thriller unlike any you have ever heard. A love strong enough to bring a tremor to your bones. A sacrifice powerful enough to make heaven weep.

At the close of World War II, a shell-shocked solider, Jan Jovic, was forced to inflict a game of life and death on a peaceful Bosnian community. In a few short hours, this young man was confronted by more love - and hate - than most experience in a lifetime.

Years later, Jan has become a world-renowned writer with widespread influence in the United States, his past buried deep in his memory. Until at the most inopportune time, the game Jan witnessed comes back to haunt him...and unwittingly leads him to a beautiful but broken woman caught in an underworld of crime.

He must now defeat an evil rarely seen. But there is a price. One that even this war-scarred solider can't imagine.

What listeners say about When Heaven Weeps

I usually am too lazy to review, but seeing that the book so far received poor ratings, I must contribute. I thoroughly enjoyed everything about it. I do believe you need to be a Christian to understand the symbolic parts of the story. I suppose that it also helped that I am an older women, who experienced many trials and turbulations. Thank you Ted Dekker for writing such a delight and Tim Gregory for a very enjoyable narration.

Honestly this book evoked so much emotion in me and not in a good way. I ended up listening to the whole thing just hoping for some kind of redemptive ending to the storyline but it def never came. Whatever doctrinal truths were there were overshadowed by the absolute, in my view, abominable doctrines of devils. Literally hated this book w a passion I’ve never had for any other book. I guess if I could sum up my view of the issue I had is that the author took the protagonist, made him a weak minded cheater, gave him a spirit of lust and idolatry and compared him to Christ. So if that invokes emotions in you, that is the emotions I had throughout the book. Sorry Ted.

I absolutely love this book; I could hardly stop reading it. It was a powerful, well written allegory of God's long-suffering love for His Bride; The Church. The plot was gripping, taut with suspense; writing with such realism it causes me to search my own heart, to make sure that I wouldn't allow my emotions to drag me into an emotional hell, but that I would remember that they are nothing in comparison to the breathtaking faithfulness of Christ. May I grow to love Him like this!¡

Power story of love and inspiring christians faith. This book was well written and so hard to put down.

I have never been let down by a Ted Dekker book! Thank you for your diligence!

The story line got a little repetitive and eventually it became boring and it started to becone monotonous. However when the book wrapped up you understood why we continued to go down that path so many times.