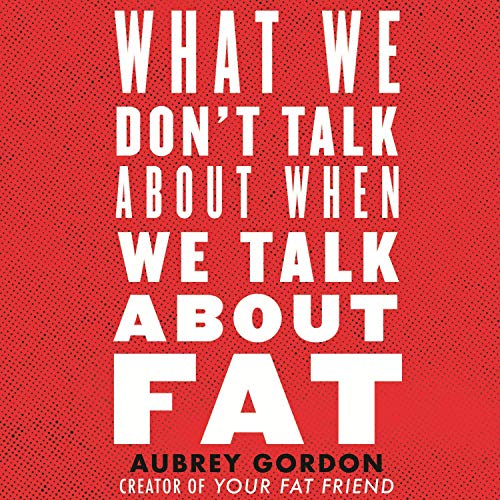 By: Aubrey Gordon
Narrated by: Samara Naeymi
Try for £0.00

From the creator of Your Fat Friend and co-host of the Maintenance Phase podcast, an explosive indictment of the systemic and cultural bias facing plus-size people.

Anti-fatness is everywhere. In What We Don’t Talk About When We Talk About Fat, Aubrey Gordon unearths the cultural attitudes and social systems that have led to people being denied basic needs because they are fat and calls for social justice movements to be inclusive of plus-sized people’s experiences. Unlike the recent wave of memoirs and quasi self-help books that encourage listeners to love and accept themselves, Gordon pushes the discussion further towards authentic fat activism, which includes ending legal weight discrimination, giving equal access to health care for large people, increased access to public spaces, and ending anti-fat violence. As she argues, “I did not come to body positivity for self-esteem. I came to it for social justice.”

By sharing her experiences as well as those of others - from smaller fat to very fat people - she concludes that to be fat in our society is to be seen as an undeniable failure, unlovable, unforgivable, and morally condemnable. Fatness is an open invitation for others to express disgust, fear, and insidious concern. To be fat is to be denied humanity and empathy. Studies show that fat survivors of sexual assault are less likely to be believed and less likely than their thin counterparts to report various crimes; 27 percent of very fat women and 13 percent of very fat men attempt suicide; over 50 percent of doctors describe their fat patients as “awkward, unattractive, ugly and noncompliant”; and in 48 states, it’s legal - even routine - to deny employment because of an applicant’s size.

Advancing fat justice and changing prejudicial structures and attitudes will require work from all people. What We Don’t Talk About When We Talk About Fat is a crucial tool to create a tectonic shift in the way we see, talk about, and treat our bodies, fat and thin alike.

“Everyone who has a fat family member, friend, acquaintance, or coworker should read this insightful book.”
—Library Journal, Starred Review

“Writing from a personal and cultural perspective, Gordon goes beyond cosmetic complaints to undress the depths of anti-fat bias and discrimination, ultimately rallying for a social justice movement to form and broaden the scope of the conversation.”
—CultureShift

This is not a comfortable read, especially for those of us who have faced prejudice and attempts at shaming us.

But it is a very important addition to the canon of literature about the fat experience.

This book should be required reading for every teacher, doctor, healthcare provider, politician, policy maker and celebrity. It is calm, precise, relatable and packed with information that could mean the difference between a human society of our dreams or our nightmares.

If you’ve ever had to navigate the world in a fat body, you will probably find echos of your own story here, and feel heard and understood. If you haven’t experienced the world in a fat body then reading this, I hope, will help you grow your own understanding and compassion for real people of size. Hopefully together we can build the just world Aubrey dreams of.

Would've preferred Aubrey herself to narrate, but otherwise zero complaints. Clear, concise and full of feeling. A must read for anyone working in public health.

Aubrey Gordon done an excellent job at explaining complex phenomenon of fatpobia. She presented the topic both through professional research and heart breaking personal stories.

This book was amazing. I thought I knew a reasonable amount about diet culture and anti-fatness, but I learned so much from this listen. It also made me pretty angry on behalf of very fat people. Some parts are very upsetting to hear, so not a light-hearted listen

This book is one every person should read. The truth behind a deeply ingrained cultural bias that hurts everyone. The last acceptable overt bias. Brilliantly written and thoroughly researched, it is an eye opener that will hopefully change the way you think about fat, diet culture and your own attitudes toward your body and everyone else's.

Absolutely brilliant book. The narration was pitch perfect too. I strongly recommend this to anyone wanting to know how to understand how the world works for fat people, and how to change it.

This is a must listen for anyone fat or who loves a fat person. The systemic societal discrimination against fat people is horrendous and destructive. This book explains why and what shoukd be done.

I think everyone should listen to it however..

I think everyone should listen to it however I barely could listen to chapter 5&6 because there was a lot of talk about rape and assault and I thought that the author should've given a warning as it can be a an incredibly difficult thing to talk about or listen to.

The book itself is very informative and interesting. it's not what i thought it would be. Also, it is mostly catered to people who live in America though some things apply internationally.

At points I felt guilty for my size, that I am not fat and if I am that I am at the thinner end and I felt a bit excluded but that could be my perception.

I would recommend this book for sure though at points it was hard to listen to.

She nails internal fatphobic feelings and experiences I’ve had for years and could never describe or verbalize. Health doesn’t equal skinny. Fat people deserve medical care too. Somebodies are bigger AND THATS OK AND FINE.

This book is a clear and honest guide that offered me a glimpse of what it’s like to navigate the world in a fat body. It has moments that are daring, horrifying, authentic behind belief, and full of the type of vulnerability that fuels movements and societal transformation. It’s a must read for anyone who has a body... so yeah, everyone. Incredible read.

An affecting read that challenges the reader to explore assumptions about fat that so many of us hold. I've never read a book quite like this. Aubrey Gordon is a wonderful writer who challenges with heart and a clear-eyed look at how we regard fat people in our relationships and also in our policies and systems, As I listened I found myself thinking, "I never thought about it quite like that before ..." I am changed -- in a good way -- after listening to this book. The narrator is perfect. This an important work. I wholeheartedly recommend it.

This book is an extremely well written combination of stories, education, and a call to action. The author really shines telling her own stories and those of other fat people. Frankly, many were heartbreaking and illuminating, arousing compassion as she describes the cruelty and dehumanization so often shown to fat people. She also ropes in the sort of statistics and research that makes her points practically bulletproof. Finally, she clearly describes the ways in which fat people are denied rights and access and the specific things that we collectively need to change in order to shift a fatphobic world. Some of the social justice issues include work discrimination, housing discrimination, being kicked off airline seats without refunds, sexual violence, reduced access to public spaces due to lack of accommodations, and medical discrimination that often denies fat people the right to medical care due to health care providers assuming all symptoms fat people have are due to their weight. This can result in dangerous medical neglect for prolonged periods of time. It is appalling that fat people are so often denied access, respect, and humanity and there are a lot of changes that need to happen.

This book shines a light on the racist and misogynistic origins of many ideas that are pervasive in western culture around the thin idéal and its conflation with health. This work is so, so important, and very interesting. I’ll reread it, because it’s so much to take in.

The narrator has a warm, personal voice that strikes the right chord with in first-person narrative interspersed with research, many references, examples in media. Excellent performance.

Put this book on your list, friends. You will become more empathetic, more knowledgeable, and you will better understand why body neutrality is an important notion to familiarize yourself with.

My only complaint is that I’d hoped that Aubrey herself would be narrating this. I could listen to her talk all day. That being said, the narration is excellent.

I found out about Aubrey via her excellent podcast and hope she has more books in the works. She’s funny and brilliant and makes the world a nicer place.

Loved Aubrey Gordon's book, it is a wonderful read for those seeking empathy and open-mindedness. The author bares their soul and trauma, illuminating the cracks and flaws and gapping chasms in our Healthcare system and societal expectations towards larger bodies. Please give this a read!

There are some very good points here, but others annoy me with their petulant tone. For example, she argues that doctors’ requirement of severely overweight patients to lose weight before major surgery is discriminatory. She lauds science, but then forgets doctors might have a scientific and statistics reason for wanting to perform operations on people closer to their target weight: they’re less likely to die on the table. The author seems to sometimes forget that although she is healthy, many very fat people aren’t.

Thank you for writing this book! I am grateful and ready to address anti-fat biases in and around me!

I really enjoyed this audio book and the historical analysis of anti-fat bias and the vision and policy recommendations at the end. you can tell Aubrey Gordon has a background in political organizing. I also really enjoy her podcast Maintenance Phase with Michael Hobbs.