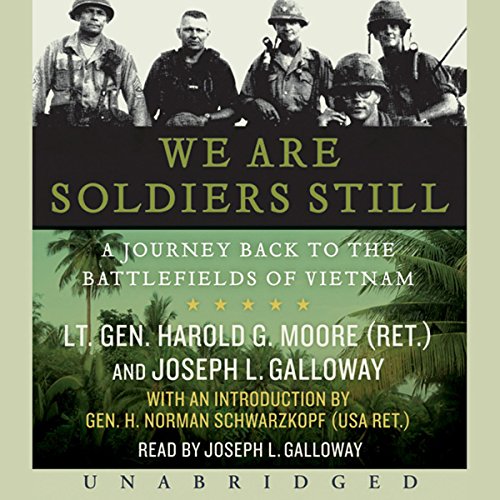 We Are Soldiers Still

The authors of the best-selling We Were Soldiers Once and Young revisit the Vietnam where they both served, the General as a battalion and brigade commander, the journalist as field reporter on four separate and extended tours. In somber and moving tones, Galloway describes how time has colored and cast shadows over the co-authors’ own gritty and vivid memories, as well as its effect on some of the soldiers they profiled in the earlier book. For this follow-up they also speak to Viet Cong military leaders with whom they had not previously been in contact to gather additional perspective on how the war changed individuals and how it continues to affect both America and the now-united Vietnam.

More than 15 years since its original publication, the number-one New York Times best seller We Were Soldiers Once...and Young is still required reading in all branches of the military. Now, Harold G. Moore and Joseph L. Galloway revisit their relationships with 10 American veterans of the battle, as well as Lt. Gen. Nguyen Hu An, who commanded the North Vietnamese Army troops on the other side, and two of his old company commanders.

Moore and Galloway mix gritty and vivid detail with reverence and respect for their comrades. Their ability to capture man's sense of heroism and brotherhood, their love for their men and their former enemies, and their fascination with the history of this enigmatic country make for riveting listening. We Are Soldiers Still puts a human face on warfare in a way that will not soon be forgotten.

What listeners say about We Are Soldiers Still

A must listen for lovers of history

This novel takes us back not only as an audience but as a nation. For those of us born at the end or after the Vietnam War; it gives a first had account of what both sides went through. For those of us whom lived through that time and even fought there; this novel could show how to get even further beyond that part of their lives. Being the offspring of parents that lives were forever changed by Vietnam; I hope it can answer questions for some, bring peace for others and help a nation further learn to heal.

Ps. to those who served throughout our nations past and will in the future; I hold nothing but the greatest respect. God Bless, Our Armed forces.

A Book That is Both Timely and Eternal

As a Vietnam veteran myself, I found LTG Moore and Joe Galloway's journey back to that land almost a surrogate for my going back myself. I have long wondered what the country is like now and I found their description both surprising and reassuring. I also found Moore's advice on leadership to be extremely sound and viable not only for soldiers in the field but for anyone in a leadership position. Finally, the epilogue left me literally in tears (I had to stop listening because I was, at the time, commuting on public transportation!) as LTG Moore paid moving tribute to the heroes in his life. I cannot recommend this more enthusiastically.

This is a great audiobook, these guys went through hell and back and want to tell us the journey. good message about recent wars like the Iraq invasion and his educated opinion. You wonder are leaders out there as good as this guy, thank you for sharing your history. your country owes you and your men alot more than you have recieved

This book makes you look at different perspectives of war regardless of your personal history or political affiliation. Great job!

VERY GOOD FACT FINDING , INSPIRATIONAL AN EMOTIONAL JOURNEY THROUGH THE EYES OF SOLDIERS. AIRBORNE ALL THE WAY

A monotone presentation of a war story.

I first want to thank all of the brave soldiers that have served and are serving to allow us to have freedom and to live the American dream.

I found the book to be informative and engaging, but as other reviews have noted Mr. Galloway's narration is hard to swallow. The biggest problem I had with the narration was the lack of emotion along with the same monotone presentation regardless of what was being described. I highly recommend that you listen to the audio sample and take note of the cadence, blunted affect and lack of emotion because the entire narration of the book is read in the exact same way.

One of my favorite aspects of book are the references to the movie as it helped me easily identify the soldiers in the story and the rolls they played in the Vietnam war. About one third of the book focuses on the time these American heroes were fighting in the war and the other two third is more of a biography of Mr. Galloway and several other soldiers’ lives well after the war ended. I think part of my problem was that I expected the book to have the same intensity that the movie presented. I feel that the movie creates a window that allows the audience to get a sense of the insanity and mind boggling bravery these solders engaged in during the battles that they fought and died in.

Even with the poor narration and the lack of eyewitness like experences I still enjoyed the book. It is well written and all of the information is interesting. If you are considering this book with the hope of being drawn back into the time of the Vietnam War and to be able to experience/whitness what these amazing soldiers went through this book may not be for you.

loved it. Joe Galloways narrative good. only problem was the music too loud overlapped

First, I know Joe Galloway's voice well enough that it was a distraction having him read a book that references him, but is written entirely from General Moore's point of view. I was constantly catching myself forgetting this.

Otherwise it was good, although some of it was redundant, for those who've already read "We Were Soldiers...", which I would imagine is everyone.

Follow up to We were Soldiers Once and Young

A wonderfully informative follow up with deep insight into the feelings of the author. The stories of those he interviewed were fascinating.