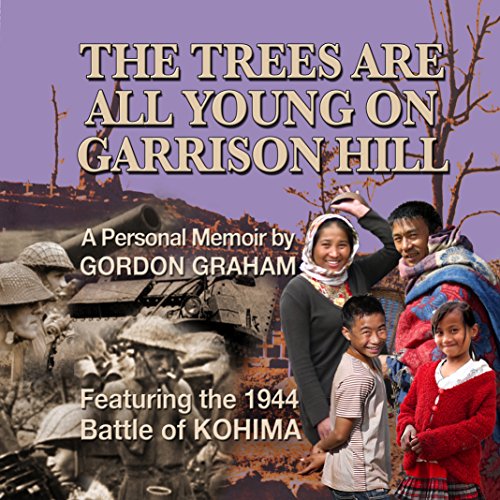 The Trees Are All Young on Garrison Hill

The Trees Are All Young on Garrison Hill is written and read by a veteran of the Second World War battle of Kohima. This tautly-written autobiography takes the listener on a journey from a quiet respectable Scottish boyhood to the sudden brutality of jungle warfare in Assam and Burma, and afterwards through the twilight of Empire in India, where Gordon Graham lived for 10 years after the war.

Now in his mid-90s, Gordon Graham's powerful and at times moving delivery draws on his personal sources as well as on official records including war diaries of his battalion, blending an objective account of great events with a soldier's spontaneous and candid reactions to them.

Episodes of drama and intense emotion are punctuated by moments of both poignancy and humour, leavened by mature reflection on the meaning and meaninglessness of war.

Garrison Hill was the epicentre of one of the fiercest and most strategically vital battles of World War II. Overlooking Kohima, a town in the Naga hills of North East India, Garrison Hill was until 1944 a tranquil tree-clad enclave surrounding the Commissioner's bungalow and tennis court. Suddenly in April 1994, it became the scene of intensive close-quarter combat between a Japanese force attempting to invade India and a British division thrust into action to repel it.

Visiting Japan as part of his business life as a publisher in New York and London, the author sought out and dined cordially with Japanese veterans who had fought at Kohima, and later, as one of a small number of British veterans seeking reconciliation, entertained visiting Japanese veterans at his home. One such party finished with a sing-song, and a rendering of Auld Lang Syne in Japanese. When you can laugh and sing and cry a little with your former enemies, he writes, you know the war is really over.

The denouement of the book describes the formation of the Kohima Educational Trust, a charity founded by the author after the 60th Anniversary of the battle.