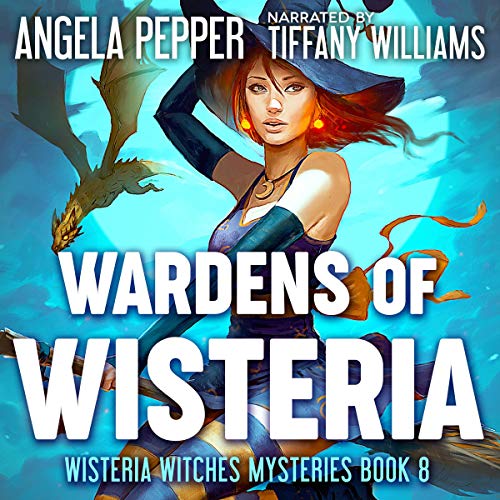 By: Angela Pepper
Narrated by: Tiffany Williams
Try for £0.00

Zara Riddle is used to being woken up in the middle of the night by magical creatures. Being a witch is incredibly fun, but it does have a few drawbacks. Zara's powers make her appealing to the recently deceased, who are always showing up seeking her help. This witch is a real ghost magnet!

When Zara's resident telepathic wyvern wakes her up to announce there's a new ghost in the house, Zara is anything but surprised. She greets the new spirit, locates the crime scene, and notifies the authorities. All before the sun comes up. Zara's work is done. After all, the town's detective should be able to solve this homicide without her.

The detective, Theodore Bentley, has other ideas. He knows about Wisteria's secrets, but he's not the stubborn type who insists on doing everything himself. Why chase down a killer alone when you can have a powerful witch as a partner? He invites Zara to join him on the investigation. Zara accepts, because why not? She'll rest easier when the case is solved. Plus two heads are better than one, even if one of them is a mere human.

As the crime-fighting duo dig deeper into the town's secrets, both the human detective and the witch are shocked to discover a killer in their midst. When they underestimate the killer's powers, the tables are turned. In a heartbeat, everything changes.

Zara Riddle can only watch helplessly as someone she cares about saves the witch's life by sacrificing their own.

Wardens of Wisteria is book one of a new mini-series set in Angela Pepper's wickedly wild world of Wisteria Witches. If you're new to the series, you can start here if you'd like! This book is told from the point of view of Zara Riddle.

What listeners say about Wardens of Wisteria

I love this quaint magical world

Another great whodunit story. Easy to listen to and you could just listen to this one without other books from this world. (the others are well worth listening to though)

Another well written story in the Wisteria Witches series. Great characterisation and development of characters already met in previous books. Can easily be read alone but great continuation of series with new characters being added. Very well read. A great listening experience.

Just can't get enough of Zara Riddle and her family and friends. I find myself laughing out loud again with their adventures...

We get more of Zara and Zoey in this book after having a couple about Zinnia and I was very happy to listen to this. I have loved this series from the beginning and have to say it just keeps getting better. Zara’s emotions are on overload with this book and it makes the story even better. A great book with amazing narration.

I HATE Zara but.. I love the adventures

I HATE Zara but I love the adventures and the other characters. I find Zara to be extremly annoying and her constant joking in awkward/serious situations makes me want to slap her. She jumps to judgement of people... just so much to dislike. I hate when ahe talks to herself in the third person. The other characters are awesome and some are very funny. I like that the author is allowing us to know more about the other characters. I will keep following this series. My hate for Zara wont affect my love for the series.

cute. a little muddy on the resolution, but I really enjoy her books a lot.

Wardens of Wisteria (Wisteria Witches #8) was a great read by Angela Pepper. Zara Riddle’s powers as a witch, make her appealing to people who recently died. Their ghost shows up to get her help. Detective Theodore Bentley get’s Zara’s help in solving the newest homicide. He knows about the secrets of the supernatural and asks Zara for help with his case. I really enjoyed reading Zara and Theodore searching for the killer and solving the newest crime. I cant wait to read more by the author.

This series is expertly read and I love the characters. It's an easy listen that will make you laugh

Grab a cup of tea and settle back. You will enjoy matching wits with this witchy detective. Don’t think you are ahead of her,though,as this witch has a few tricks up her sleeve you won’t see coming.

Totally enjoyed this!I was laughing out loud on a bus full of people!lol There ia a murder in Wisteria. Zara is tasked by a ghost to find his killer.Zoe finds out who she is. Tiffany Williams was a wonderful narrator as usual. I was given this free review copy audiobook at my request and have voluntarily left this review.'

Humorous and delightful to listen to

As a witch, Zara riddle is used to being woken up in the middle of the night for ghostly reasons. When her telepathic wyvern wakes her up to deal with a ghost, she doesn’t think a thing of it until it leads her to a decapitated course. Theodore Bentley, a local detective Zara has worked with in the past, lands the case. Familiar with her witchy ways, Theodore isn’t afraid to get his hands dirty and let her help solve the case. As the two unravel clues, they encounter the ghost of the victim and try to bring down the killer. Could it be the sister’s boyfriend? The mysterious coffee shop owner? With a town full of supernaturals who is hiding their identity and who is hiding a murder? Narrator, Tiffany Williams does a great job of bringing to life each well-developed character with her unique voices. This allows the listener to easily get lost in Zara’s world. Her emotional tones fit well with what is going on inside the story and work well with the humorous part. The narrative pacing is smooth, transitions well, and matches pace with the story. The plot is well-developed and engaging. Fans of mysteries, supernatural, fantasy, and humor will enjoy reading this book.

Please Note: A copy of this audiobook was given to me in exchange for an honest review. No financial compensation was received. All opinions expressed are my own.