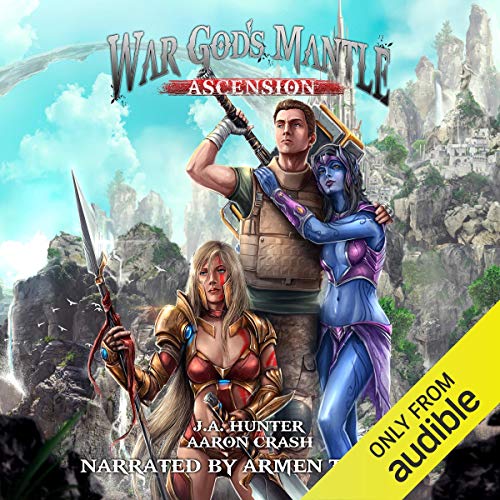 By: James Hunter,Aaron Crash
Narrated by: Armen Taylor
Try for £0.00

When Marine Corps pilot Jacob Merely crashes during a routine mission off the coast of Cyprus, he was sure it was game over.

After surviving the crash and pulling himself onto the sandy shores of a long-abandoned island, however, Jacob unwittingly stumbles headfirst into the ancient ruins of a dead city. Unfortunately, he also stumbles into an age-old battle between good and evil - and he is now its newest recruit.

The island once belonged to the Amazons, daughters of Ares, the God of War, and stood as the final bastion between the human world and the monstrosities of the Great Below. But Jacob’s arrival has awakened the old gods and disturbed the seal holding the ravaging darkness at bay.

Now, with the help of a sacred gem containing Ares’ power, Jacob must recreate the Amazonian defenders of humanity and fortify the island stronghold. And if he fails, Hades will unleash his army of the damned and the world of men will fall, giving rise to an age of walking nightmares.

"You had me at mythology. You sold me at the crafting, game mechanics, great characters, and serious action. From start to finish, War God's Mantle delivers. Do not miss this book!" (Harmon Cooper, author of Fantasy Online and The Feedback Loop series)

Okay but could not engage me

Could not finish the book. Not sure why, but I just did not care for any of the characters or have any emotional attachment. Had a good premise, no long winded reading of stats updates every 10 mins like other books and an interesting plot. Narrator did a good job with different voices but in think struggled with all the female voices and being a book about Amazon's the are a lot of female voices; could of perhaps worked better with a female narrator. The constant use of the leaf character's name was my real bug bear, it seemed to be used every few sentences and just kept making think back to "Scrooge" every time if was said.

Love this so much.

Epic as in where’s the next epic?? I can’t believe there’s only one book, you can’t leave it there,

As a fan of previous works by James Hunter i was expecting great things and the detailed world building wa excellent. not sure the war god route works as well as say his viridian gate series as the start is a little rocky with the flow. It does pick up tho and by the end we are in full flow with a thoughly enjoyable adventure.
The very very end does fall slightly flat as maybe a little rushed and not what i expected but does not stop me from looking forward to the 2nd adventure.
Narration worked very well i thought.
This was a story i asked for and as such is based on my own opinion.

When you absolutely MUST LEVEL UP!

Jacob, a marine Pilot,finds himself in a world of hurt (technically on an island of hurt) when his plane accidentally enters a pocket universe owned by ancient Greek Gods. His life goes from bad to aw crap, in about five seconds of crash landing and only gets worse when he makes it to shore.

War God's Mantle is a fun little ride that has dashes of greek mythology and gaming sensiblities blended into a wonderful soup of battle, bloodlust, and babes. This has a Harem feel to it (because. . . well, DUH), but is squarely centered into RPGLIT. The explanation for the gaming screens and leveling of experience is deftly handled in a logical fun way. My only complaint is that it does steal a little from the 80's classic Clash of the Titans, but I'm writing that off as a homage. Taylor does great narrating, and I don't think I've ever heard a narrator announce a new chapter quite the way he does. It kind of comes across like those old monster truck rally commercials where they scream, "SUNDAY, SUNDAY, SUNDAY!". It's pretty awesome how he does that. Even though I did receive a promo code for this review it in no way influenced my considerations of the material, and in fact, inspired me to be more honest. In fact, getting a code generally makes me harsher as a reviewer as I am more often concerned what someone like Me will decide based on my review. So take my word for it, this is some fine fun writing.

This is a book that I appreciate did not rush the premise, and seems like it will be a trilogy rather than an endless series of books, it has an honest to "god" end in sight, and I can't wait to see that happen. Then, once the initial premise is completed I would more than welcome anotehr set of books!!

Guy acts like he has never seen a member of the fairer sex. It's hard to listen to a fighter pilot mumble, mutter, then blush furiously at every thing.

What a fantastic book! I loved the concept behind this book and found it to be a very original take on the LitRPG genre. The Greek mythology aspect was interesting and added a lot of depth to the story as my brain went back in time to remember all of the mythology I'd learned in school. This was an engaging listen and the time flew by. Before I knew it, I was at the end and hoping that James Hunter and Arron Crash have a sequel coming. I think my favourite part was the characters. They're very vivid and made me care about what happened to them. Love that in a book! A final comment on the narrator, Armen Taylor. I wondered how he was going to pull of narrating a bunch of Amazons. I was really pleased with how he represented them. He managed to convey the female voices very well and the Amazons came across as stately, even when they started to pick up modern vernacular. With quite a few Amazon voices to portray, Armen found a way to give them all a distinct voice. This is one of the most enjoyable books I've listened to in a while!

My biggest complaint is the use of slang. And despite what people say the main character does not act 16. He acts like he's a 48 year old ex surfer dude trying to sound like he's still 16.

Seriously, I only hear people talk like that in 80's movies. Who still says "my dude" every other sentence un-ironically anymore?

Really liked the narrator though, never heard of him before and I was thought he was good, despite his seemingly limited range when it came to female voices. But with a voice like that you can't really fault the guy.

interesting but that protagonist

this is starting to be a thing with a lot of these types of books. it's one trope I'mfinding more and more annoying. Jacob is put simply a god damn idiot. It was frustrating trying to wait for him to catch up to the rest of the class and frankly his insecure I'm a good guy bullshit is extremely aggravating. Other then that I enjoyed the rest of the book and loved the three generals especially Phoebe. its a fun, strong and cool idea but honestly fuck this protagonist.

I love the idea but the dialog through the whole book made me think a 16 year old wrote this. Good but to many line where I thought shut up you don't need to say more.

The main character is allegedly a US Marine, yet he credits Call of Duty for his firearms skills? And, when presented with an opportunity to romance multiple beautiful women, he does not immediately do so? A good story must be internally consistent in order to entertain, and this is not consistent with any Marine I have ever met. It's not worth buying.

This was really bad

Audible titles are clearly rated too highly. How can almost everything be above 4 stars?

Concept is fine but main lead's dialog made him sound like a massive idiot. Slang and pop culture is fine in small doses but constant use is not lead to intelligence. I seriously stopped listening half way in for a day because I got annoyed so much at the way the protagonist just threw out references. as a side question was this financed or supported by a certain product cuz it came up so many times that it made the protagonist even more annoying.

When real life meets video game to become the new war God. Find out what happens when the new war God tries to stop Hades from coming back. I received this audio book for free at my request and voluntarily reviewed.