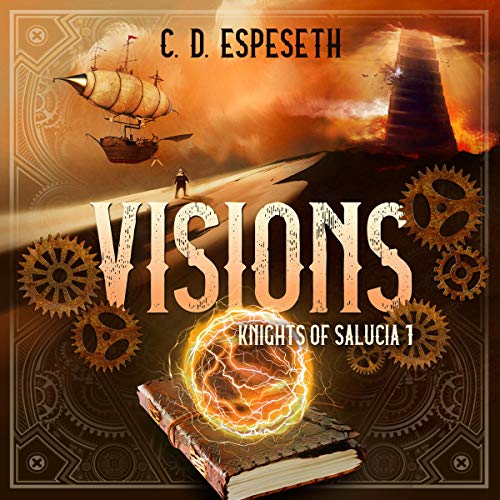 “My name is Robert Mannford, and I saved the world by killing it,” is the first line of the mysterious journal Wayran finds in the skeletal hand of a long-dead madman buried deep beneath the twisting sands of the Wastes.

Wayran’s quest for answers has taken him deep into the desert aboard his uncle’s airship when a sandstorm sweeps him and his brother, Matoh, into its depths where they crash into an otherworldly tower Wayran has only ever seen before in his dreams.

During a burgeoning age of steam, steel, and new physics-based magic the paths of an invading empire, a brother destined to be a knight, a prince who harvests souls, a detective hot on a serial killer's trail, a princess who hears the song of God, a girl raised to be a weapon struggling to control her awesome power, a young dock-rat with a strange new ability, and a dirt-poor musician with an autistic friend all collide as they find themselves embroiled in a clockwork of destinies ticking towards events which will change the world forever.

Yet the madman’s machines, long-thought dead, are still watching, and Mannford’s greatest creation, Kali, is waiting to deliver her judgment.

What listeners say about Visions

A perfect blend of magic and technology

I was lucky enough to recieve a review copy of this book. The story is excellent and brought alive through fantastic narration. The book introduces you to a number of characters all with very different powers and technologies and these are all tied together into an amazingly rich story. The only "weakness" of the book is the number of very different characters and jumping between the differing perspectives is a little disorientating to begin with. However, the payoff as the story progresses more than makes up for this.

Good variety of characters, very interesting story line. I sat in my car when it was finished not knowing what to next, great ending. Can't wait for book 2 to find out what happens next.

On of the best books I have ever read it helped me get though lock down. I recommend it to anyone with time to spare. A wonderful plot and amazing characters. Beautifully read.

really enjoyed the narration. all the characters where interesting and always wanted to learn more.
the story was abit hard to follow as it jumps from character to character but that i think adds to the intrigue and I'm invested in alot of the characters. i look forward to the next book, which I am starting now

I don't normally review books on here outside of slapping a star rating on them but this book definitely deserves one!

Now for full transparency I wasn't so enamoured by this book alone, I thought the world and characters were interesting but there wasn't much sense of urgency or a particularly clear end goal for most of the characters (up until the last 5 minutes or so for some of them) but then I listened to the second book (Awakenings) and I was blown away, the world building done in this book and getting to know the characters so well really made everything in that book so much more intense and exciting.
But that's enough about Awakenings for now!
I've just finished my first re-read and now truly appreciate how well presented everything is to prevent from overwhelming you with information and make you really connect with all the characters.

The story follows about 9 main characters and the narrator (Rhys David) does an incredible job, even the smallest character has a distinct voice and he really brings the world to life.
There are even a couple of moments where I did actually laugh out loud because he sold the delivery of a line so well that it was so much better than if I had just read it.

There's not too much to say about the plot as it really does just feel more like an introduction to who all the major players in the story are going to be and what the rules of the world are but it never gets bogged down in exposition and moves along at quite a reasonable pace.

The setting is sort of Steampunk-y I guess, it's set in a world thousands of years after a cataclysmic event that killed everyone in the world so whilst most people are living a relatively medieval (Knights, Kings, bowmen etc) there's also Chroniclers who are trying to unlock the mysteries of all the ancient technology laying about.
Some people have the ability to Syphon, to draw the energy out of the environment and use it (predominantly) to augment their attacks and weapons.
There's also a relatively modern police force with detectives and everything.
It's a fun blend of elements and they all work really well together.

I would highly recommend this book to anyone, it's a nice, relaxed (for the most part) story that lays the foundation for an incredible series.

Well worth a listen

I found myself really captivated by this story. This is an author and series I will be spending more time and money on. Just really good story telling. I found it hard to really define it as steampunk because the scope of the story was so well done. You can tell this is a story that took a while in the making because it is just so well thought out. There is so much junk out there and so many stories that look like carbon copies of others.......this is NOT one of them. I purchased this copy.So why only 4 stars on the story.....So why only 4stars? Because I do not just throw them out there. I plan to relisten to this in a couple of months and may up it to 5stars then.

really enjoyed it. I'm not very good at describing things so i rarely review books but this one deserved the effort. looking forward to the authors next work.

I listen to audio books daily. In the alt world genre competing with legends like Brandon Sanderson, Peter V Brett, Orson Scott Card, is not an easy under taking. C.D. Espeseth managed to do it. While I'm not a fan of the reader, the book content is incredible. I will definitely be listening to it again, I feel I missed Soo much, but I'm looking forward to listening to it again... but only after I listen to the next book!!

Not going to lie, at first it was really hard to get into. The plot humps around from reach characters view (And some characters don't appear until near the end), but after awhile I was interested. I'll be happy to see where the plot goes.

Did not find this engaging

I received this book for free but the review is left of my own accord.

I did not really find this story engaging. I struggled to get through it even though this is my preferred genre.

A couple of the characters were interesting but even when the focus was on them I found myself losing focus and had to rewind to listen to the parts I missed.

just finished listening to this book and really enjoyed it. it has some very interesting world building, a kinda made x of steampunk and fantasy, with some sci-fi and apocalypse elements thrown into the mix. characters are well fleshed out, though it does jump around a bit much sometimes. the narrator is very enjoyable to listen to, manages different voices and accents quite well. I did receive this book for free in an exchange for a review, but it's well worth spending a credit on, and the rest of the series will be on my purchase list as they come out.

The only problem is that I now need to get the next book in the series.

It took a while for me to get it, but once I did I was surprised how much I liked it. There are a lot of characters and the story moves around quite a bit, but once it all comes together it's really something. There are a lot of genre mashups going on, which I enjoy, narration is absolutely solid. I am eagerly anticipating the next book.

I had to speed up the narrator, but the story was very good. Loved it.

It took a little bit for me to get into as the stage was set, but it was well worth the wait. I binged this book in 2 days. This one was an easy five star for me.