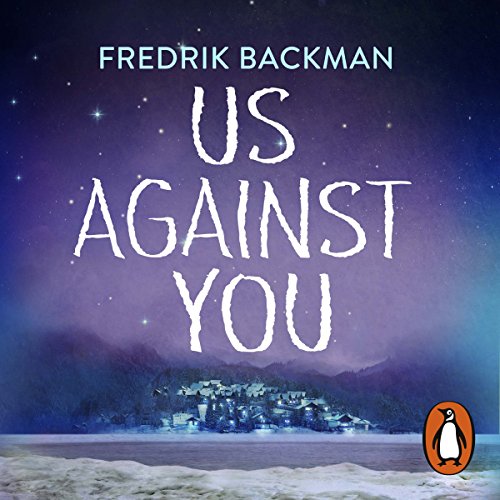 By: Fredrik Backman
Narrated by: John Sackville
Try for £0.00

Penguin presents the audiobook edition of Us Against You by Fredik Backman, read by John Sackville.

A small, broken town sits on the edge of a frozen lake surrounded by a forest, its wounds still raw from a tragedy that tore its fragile community in two.

Beartown has lost its way. Now the cold and dark that surround the snowbound town creep in, and so do new conflicts and tensions. What was once a friendly rivalry with the neighbouring town is beginning to turn sinister and Beartown braces itself for another tragic blow.

How far will the people of Beartown go to preserve their reputations for a second, deadly time?

Us Against You is a spell-binding exposition of small-town life in all its flawed complexity.

What listeners say about Us Against You

Incredible sequel to Beartown. Fredrik Backman is an outstanding writer. The depth of compassion and thoroughness he approaches these big issues with is mindblowing.
These books explore masculinity, in view of toxic masculinity. But there is nothing black and white here though. First book explored it more from the feminine viewpoint (and despite being a male writer he did 110%justice to it), second explored it more from the male point of view.
I have cried like never before while listening - my heart broke over and over in the most beautiful way. Catharsis is rarely reached by reading, but God knows these two made it happen.

Incredible book, better than the first one

It took me a while to get into the first book, 'Beartown' but it set the scene very well for 'Us Against You', which I actually enjoyed far more. The themes of heartbreak, loyalty, family, violence, love and grief are explored in more powerfully emotional ways in this novel compared with 'Beartown'. I found myself far more deeply invested in the plot of 'Us Against You' since I knew the characters' history from book one.

This time the plot is rather more gangland and a few of the political figures seem cardboard and uninteresting. By contrast, the thug figures are far more subtly drawn, and mob boss Teemu Rinnius is particularly sympathetic. It is the family dynamics that Backman sketches most skilfully and form the emotional girth of the story.

Like the first book, the cast of characters is wide and the scope of interlocking plot threads is ambitious. However, the story feels carefully edited so as not to waste pace on storylines that don't matter. Backman ensures we care about every life we zoom into, from the overweight depressed foreign kid to the grumpy old man in the pub. That said, there does seem to be rather too many exceptionally talented kids in one single town and this idealism bleeds at the edges of the tale. We never really get away from a rainbow gleaming worldview where good always wins over evil. All the same, this lends a pervading sense of hope to the reader's ravaged heart by the end of the novel (Blackman can't resist killing off a few more characters in this book and the emotional turmoil is intense). Overall, 'Us Against You' is an exceptionally well crafted set of narratives with the childhood nostalgia of Stephen King ('It') and the blood-soaked grit of Malorie Blackman ('Noughts and Crosses').

As far as narrative tone goes, we quickly become accustomed to deep and thought provoking questions opening virtually every chapter. Not all of these are really explored to their fullest or followed up completely, but they certainly evoke a serious emotional tone even if the structure is a little repetitive. I personally enjoyed this style of storytelling, as the narrator directly challenges the reader to reflect on the meaning of very large existential questions. It acknowledges the spiritual complexity of the reader, and involves us in our own psychological creation, even as the text creates the psychological characters around us.

When someone told me 'Beartown' was a psychological novel, I instinctively disagreed as I felt it was mostly consisted of plot action and speech. Yet 'Us Against You' absolutely fits this description, as greater care is taken to depict the cast's memories, motivations and moments of passion. Even though some plot moments are fairly dramatic, it never steers into melodrama and all the novel's interest remains in the reactions of the emotionally-driven personae around each material event.

When it comes to language, this sequel is far more emotionally rich than its predecessor. The metaphors are more intelligent, more careful, and their echo lasts longer in the mind:

"Grief is a wild animal that drags us so far out into the darkness that we can’t imagine ever getting home again."

On first reading, this wild animal is a deceptively simple image; the story takes place in a forest, why wouldn't we see wild animals? Yet the dreadful vagueness of "animal" as opposed to any specific beast reminds us of the dull dread all humans go through in bereavement. The symbol of the bear takes on more meaning in this novel than the first; the death of a family member as a pain that never departs, always growls.

Backman's poetic voice has matured and we even enjoy momentary glimpses of Maya's lyricism that we didn't get to see in 'Beartown':

"I wish you courage
I wish you rushing blood
A heart that beats too hard
Feelings that make everything too hard
Love that gets out of control
The most intense adventures
I hope you find your way out
I hope you’re the kind of person
Who gets a happy ending."

This poem/song contains all the soulfelt abandon of a teenage girl unafraid to show all the colours of her creative love. Choosing to share with the reader a scrap of Maya's unfiltered expression is a startlingly refreshing moment of connection for the reader. We have spent much of this novel (and the first) unable to see Maya clearly or hear her directly, drowned out as she often is by the rage, hatred and pride of those around her.

By the end of the novel, the narrative bearly touches on describing hockey matches because focus is fully absorbed in the emotional struggles of being human. For a small town culture of woodland masculinity, pervasive alcoholism and bruised children, the setting is surprisingly relatable for the average non-Swedish urban reader. When alcohol-drowned loneliness hangs such dark clouds hanging over the heads of Beartown children, the reader can forgive overtones of somewhat fanciful idealism. Given all that Backman puts his characters through, our hearts remain just about intact when unlikely plot points of redemption surface. While 'Beartown' was not shy of depicting the punishing PTSD arising from rape, 'Us Against You' was decidedly more hopeful about the prospects of a rosie friendship between a hardened criminal and a gay hockey player.

Perhaps the natural liberal inclinations of young people really are a redemptive force of society or maybe the author just felt he'd put the readers through enough violence at last. Either way, such strong rays of hope as these left the reader feeling able to walk away thinking "I enjoyed that book" rather than "society is broken and I am dead inside". And we all needed that, truly.

The characters so in-depth, interesting and real, not like the the two dimensional characters in most fiction.

Second book in the Beartown trilogy

Loved it, like I love all of Backman’s books.
So great to read books with wonderful, neurodivergent characters, beautiful prose that make your heart & emotions soar and sink in equal measure.
He makes me want to write.

Beautifully narrated by JS too.

A decent story picking up themes and style of the first one written with such compassion and narrated brilliantly the story has a good sprinkling of laugh out loud humour and the changing room is especially funny.

Another wonderful book from Backman

Continuing the story from the first book, 'Beartown' this book did not disappoint. Full of an array of characters who are easy to invest in and beautiful writing, the book has passion and emotion and was fantastically narrated!. I'm now off to listen to 'The Winners'!

I love these characters. Fantastic writing and the narrator is fantastic. I can’t wait for book 3

Deceptively simple, straightforward writing bringing out anything but simple human lives woven in and around each other. A community glued together by ice hockey BUT don’t be put off if you have no idea about ice hockey. You don’t need to. I still don’t. However, if you like the reality of humans and community without mawkish sentiment and angst but oh - so - truthful, then I totally recommend this, just brace yourself for bursts of OTT bad language. I’m off to find out if there’s another about Beartown.

Boring save your credits

God only knows how i persisted with this one. Hockey! Monotone narrator. Scripts that are just incredulous.

Long, drawn out story. Worst I’ve listened to in a very long time. Save your credit and avoid.

It’s an amazing book - so much inner thinking and human justification and deeds with harsh consequences. Such mature approach by the author- I really really liked it! Describing the psychological traits in mesmerizing detail. How human feel and sct, how they love, hate, grieve, forgive and continue living. Thank you!

First part was excellent but this one was better

Great book, lot more emotions then in first part. Story is compelling and keeps you tangled not allowing you to stop listening. At times I really struggled to stop reading. Highly recommended.

As always, amazing book and performance! Would recommend it to anyone looking for a real story...

Amazing book, so full of motions and descriptions of human nature. Would recommend everyone to read his books

In Awe of This Man

Never has a book made me shed so many tears, in so many public places.
I am in awe of how Frederick Backman writes.
How he’s able to make you feel things you didn’t know you were capable of feeling.

Thank you for this book, so timely. We all needed it.

He always makes me cry

About 3/4 of the way through I thought, I love this, but not as much as Bear Town. But oh, the ending had left a big lump in my throat and tears in my eyes. And I just was Benji to be a real person. Because how can you not love Benji?