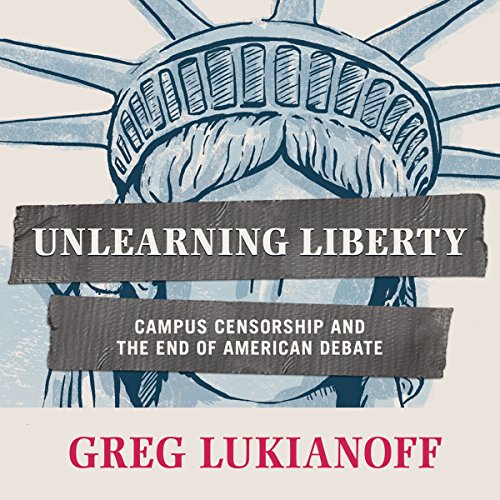 By: Greg Lukianoff
Narrated by: Philip Hodges
Try for £0.00

For over a generation, shocking cases of censorship at America's colleges and universities have taught students the wrong lessons about living in a free society. Drawing on a decade of experience battling for freedom of speech on campus, First Amendment lawyer Greg Lukianoff reveals how higher education fails to teach students to become critical thinkers: by stifling open debate, our campuses are supercharging ideological divisions, promoting groupthink, and encouraging an unscholarly certainty about complex issues.

Lukianoff walks readers through the life of a modern-day college student, from orientation to the end of freshman year. Through this lens, he describes startling violations of free speech rights: a student in Indiana punished for publicly reading a book, a student in Georgia expelled for a pro-environment collage he posted on Facebook, students at Yale banned from putting an F. Scott Fitzgerald quote on a T shirt, and students across the country corralled into tiny “free speech zones” when they wanted to express their views.

But Lukianoff goes further, demonstrating how this culture of censorship is bleeding into the larger society. As he explores public controversies involving Juan Williams, Rush Limbaugh, Bill Maher, Richard Dawkins, Larry Summers - even Dave Barry and Jon Stewart - Lukianoff paints a stark picture of our ability as a nation to discuss important issues rationally. Unlearning Liberty: Campus Censorship and the End of American Debate illuminates how intolerance for dissent and debate on today's campus threatens the freedom of every citizen and makes us all just a little bit dumber.

What listeners say about Unlearning Liberty

The recent campus madness has been a long time in the making and this book documents some truly terrifying episodes (google Thought Reform at the University of Delawar by Adam Kissel). Speech policing produces dumb minds, incapable of dealing with ideas they find uncomfortable. The only reaction they can concieve being activism to try to block those ideas from shaking their fragile certainties. The culture of censorship in the name of political correctness is incompatible with free speech, which makes it incompatible with the democratic process itself, and successfully repelling it will be our major challenge as a society going forwards.

Lukianoff and FIRE have done much and continue to do much in the name of fighting for free speech on Campus. Now they expose the different threats to Free Speech that have come about in their work. Learn about them here.

this is a great book how ever it is poorly edited, the reader stumbles over words and has to repeat himself and he breaths loudly ever 5 seconds, these things should have been edited out.

it opened up my eyrs

it showed me the reality of the destruction of civil rights in college by liberals.

An excellent book on free speech

Must read for every American

This was definitely an eye opener on what is going on in American school. Definitely a must read to preserve the liberties we enjoy.

great book for those who are contemplating college

The philosophy in the school room one generation will be the philosophy of the government in the next.-- Abraham Lincoln.

This book is wonderful and informative, however the reading is dispassionate and lifeless.

to be fair there are a few times where the narrator emotes, but these are short and rare.

A non-polar look at freedom of speech abuses in ed

I learned a lot and changed some of my views as a result of the book. The book was also happily not preachy. I will be listening to it again. The narration is fine but amateur (vocal retakes come in at different levels of loudness with different mic placement and some voice edits never got made). My background is music and audio, so I'm probably just a bit picky here. I will strongly recommend the book, especially to students and teachers. Great work!